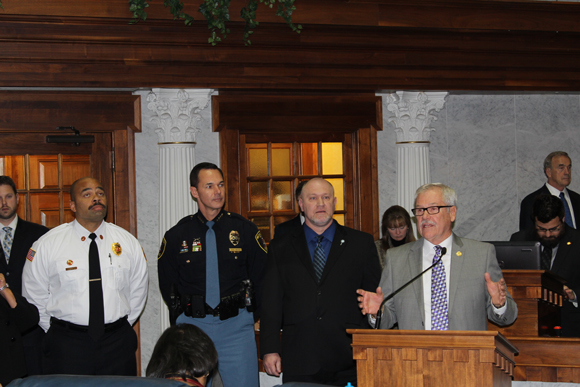 On Tuesday, legislators met to begin the second session of the 118th Indiana General Assembly. Called Organization Day, the first meeting is largely ceremonial however, both the Senate and House of Representatives honored a group of first responders from northwest Indiana. State Senator Jim Arnold (D-LaPorte) authored Senate Concurrent Resolution (SCR) 2 honoring emergency workers who played a vital role in the rescue deemed the Miracle on Mount Baldy.

In July, a 6-year-old boy fell 11 feet into a sink hole on Mount Baldy and was buried alive. Emergency crews worked for nearly four hours to ultimately rescue the boy who survived. Honored for their rescue efforts at the Statehouse were Michigan City officials Mayor Ron Meer, Chief of Police Mark Swistek, and Fire Chief Ronnie Martin. 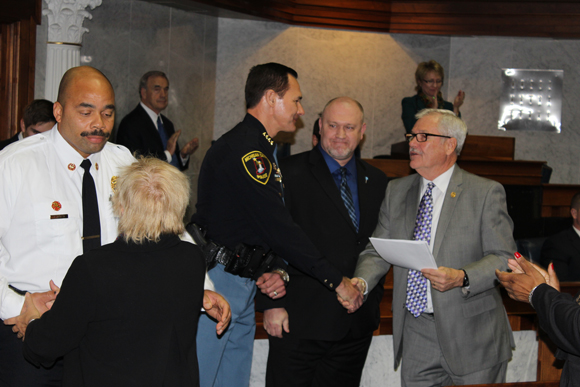 “The time, effort and professionalism that these first responders exhibited are no doubt the reason that a 6-year-old boy now has his whole life ahead of him,” said Sen. Arnold. “And for that, they deserve all of our respect and gratitude.”

Sen. Arnold represents District 8 in the Indiana State Senate which encompasses most of LaPorte County including the City of LaPorte and the eastern part of Michigan City. It also includes western St. Joseph County and Davis, Oregon, Washington, Center and Jackson townships in Starke County.

For more information about Sen. Arnold, his legislative agenda or other State Senate business call 1-800-382-9467 or visit www.IN.gov/S8.