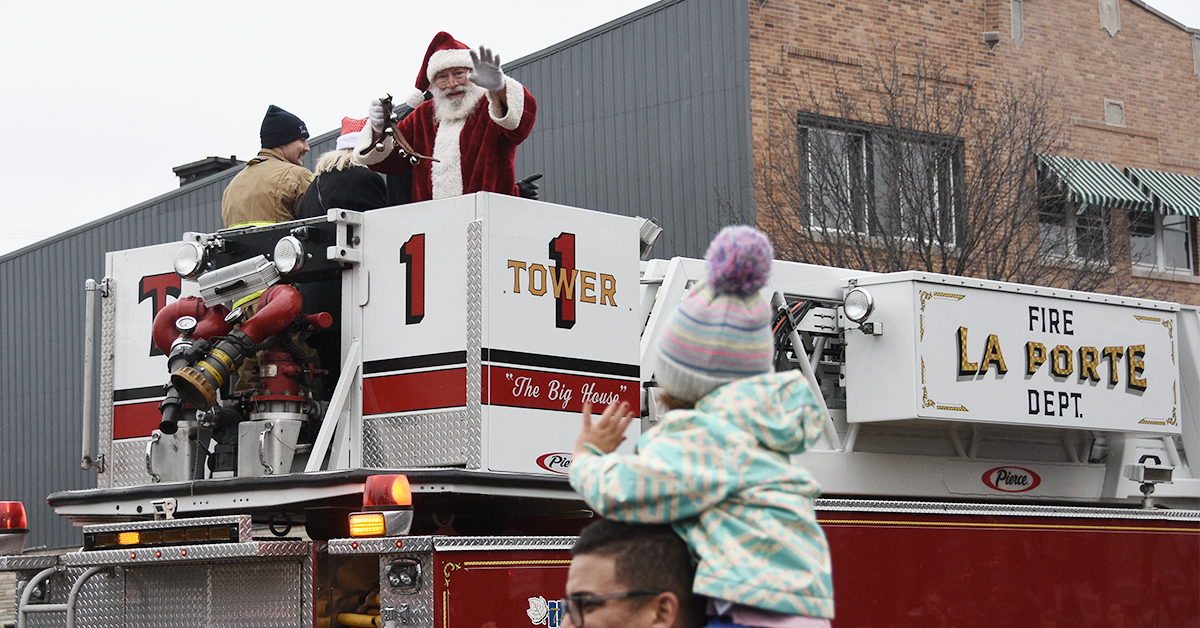 There is perhaps a no better way to kick off the holiday season than with a parade, and the City of La Porte is one town that knows that as well as anyone, as the annual La Porte Santa Parade to kicks off the official start to the 2019 holiday season.

This year, the parade began one hour earlier than usual, starting at 11 a.m., with horses, dancers and even Santa himself, escorted as usual aboard a firetruck. The parade made its way through downtown La Porte, before ending at Plaza 618, where children both young and old are invited to visit with Santa himself.

The parade also serves as an invitation for people to come to La Porte and shop local for Christmas and throughout the year.

“It’s easy to shop online or at a big box store, but I think that what people may not realize are all the unique things downtown La Porte has to offer,” said Angela Rose, Downtown Director for the city of La Porte. “People can visit here, shop at our local businesses, stop for something to eat at one of our local cafes, and perhaps find just the perfect gift right here in downtown La Porte.”

Lindsay Jongkind, Marketing and Membership Director for La Porte Economic Advancement Partnership said that the city decided to do something a little different for this year’s event.

“We decided to start off with our annual Winter Market this year, which will run today from 8 a.m. to 1 p.m. Of course, we’ll have our Santa Parade, with Santa visiting with the children here at his chalet, and then we invited everyone to stick around for our annual Shop Local Open House,” Jongkind said.

“It’s just another way for us to say thank you to all the people who come out here and spend their holidays with us, right here in La Porte,” said Jongkind. “We really go all-out here for the holidays.”

Plaza 618 serves as the focal point for festivities, and will also be the destination of choice later in the evening for the annual Christmas Tree Lighting Ceremony, hosted by Mayor Mark Krentz, accompanied by the La Porte High School Choir, who will entertain everyone with holiday songs sure to bring out their very best holiday spirit.

Of course, the man of the hour, Santa Claus himself was thrilled at the turn-out.

“The elves are a little nervous, but they’re working hard and I think we’ll have things just about ready in time for Christmas morning. Rudolph is looking forward once again to leading the team and we’re excited to come back to La Porte. It’s such a lovely little town, filled with good little boys and girls,” Claus said.

Participating in the parade were Harvey Adams, of AA Rain-Tite Roofing and several of his friends, some of whom came from as far away as Alexander, Ohio and Lynn, Indiana as well as Michigan City and La Porte. They braved the chilly November air in their open Slingshot bikes to pass out specially-prepared packets filled with candy and toys.

“This is just something we’ve done for four years now,” Adams said. “We start planning it about a month early, and it takes about a week or so to get all the packets packed up.”

It’s a bit of work, but Adams and crew say that it’s absolutely worth it.

“We just do it to see the looks on the children’s faces. That’s what it’s all about.”

Looking across the hundreds of tiny faces, each filled with joy and wonder certainly seemed to confirm that fact.

Among the hundreds of people who came out to enjoy the day in La Porte was Abbie Johns of Hamlet, Indiana, who attended the parade for the first time with her boyfriend, Brenton and daughter, Ella.

“It’s so much fun! Santa was great and the kids really enjoyed seeing the dancers,” Johns said.

“For a lot of local families, it’s a holiday tradition,” said Jongkind, who invited the adults to be sure to come back next weekend for the annual Santa Crawl, which visits many of the local pubs in the city.

“Of course, that one’s more for the adults,” said Jongkind with a laugh.

The parade runs down Lincolnway, right through the heart of La Porte’s downtown, with dozens of small businesses, all decked out with their very best, most festive decorations for the holiday season.

“Next week, we’ll have the Santa Crawl pub crawl,” said Jongkind. “Another way to come out and celebrate Christmas.”

Fun holiday events are planned every Saturday from Nov. 30 to Dec. 21 in downtown La Porte. Follow @laportepartnership, @downtownlaporte, and @laportesantaparade on Facebook for more information. Questions may be directed to 219-324-8584 or lindsayj@laportepartnership.com