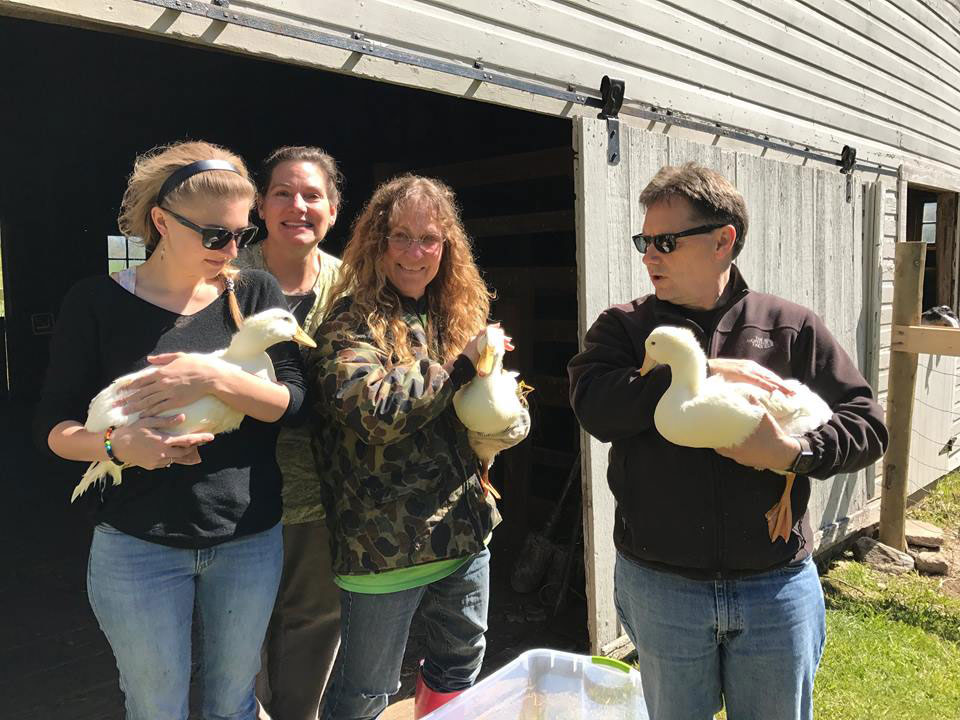 Years ago, Annette Hansen and her son stopped by the Chellberg Farm in Porter to see the animals. There were pigs to pet, cows to moo with, and chickens to peck and poke.

“Oh we had such a good time there!” Hansen recalled.

Due to a lack of funds, the animals were sold off, and for years the farm was overlooked and passed by.

Yet, Hansen kept those memories alive.

Chellberg Farm is part of the Bailly Homestead, which was established by Joseph Bailly back in 1822. It was designated a National Historic Landmark in 1962 and is preserved by the National Park Service. The Bailly property includes a two-story log cabin, a brick house that was built in 1874 by Bailly’s daughter, Rose Howe, and a storehouse.

Neighboring the Homestead is Chellberg Farm, which was established by Swedish immigrants, Anders and Johanna “Kjellberg,” who purchased about 80 acres in Porter County in the 1870’s for a farm. Since then, generations of the Chellberg’s have lived on the property with their many animals.

Thanks to the Dunes Learning Center and volunteer Annette Hansen, the sounds of a happy farm life can be heard on the trails of Bailly Homestead again after an eight-year hiatus.

The caring of the animals is all volunteer work, and the farm is still owned by the National Lakeshore, Hansen said.

“I have ‘Volunteer’ tattooed on my forehead!” she said laughing.

Last week, I met Hansen during her nighttime check-up on Number One – the 900-pound steer, the multi-named billygoat, and the newest occupants, three white ducks. Outside the barn are about 30 chickens clucking around inside the caged chicken coop.

It was Geof Benson, Executive Director of the DLC and his staff who invited Hansen to a meeting where they would talk about the future of the farm and ways to bring back the animals. With enthusiastic support from National Lakeshore Superintendent Paul Labovitz, Benson put all efforts into reinstating the Chellberg Farm.

Number One is personally owned by the Hansen family, and was brought to his new home in April.

The goat was loaned to the farm by Kyle Wilson to give the cow company, and Julia and Lora McMeans of Chesterton gave the ducks to Hansen to house. The chickens have been living at the farm for the last year, and are taken care of by Benson and the DLC staff. The Westville Chapter of the Future Farmers of America (FFA) are helping Benson with the chickens and feed, he said.

“The staff at DLC have a rotating volunteer shift,” Benson said, walking to the chicken coop with a bag of broccoli tips in his hand.

“We are thrilled,” he added. “It is very neat and exciting that Annette and her sons are taking care of the animals and that we could get this going.”

Hansen met Benson when she was looking for a place to mount her bee hives. As the local 4-H Discovery Charter School Trackers bee keeper superintendent, she and Benson and NIPSCO worked out a deal to keep the bees on a property next door to the DLC.

“NIPSCO, they are heroes. They knocked down the overgrowth in the area so we could have our own bee keeping yard,” she said. “They cut down tress and cleared it up.” 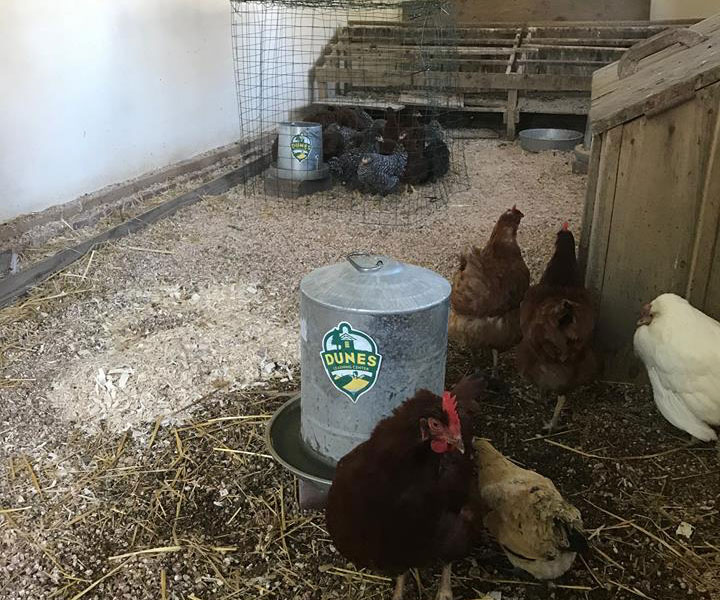 Hansen is the girl for this job. She, her husband, and two sons Xander, 13, and Dane, 11, live in a house in Porter with their own outdoor chickens – and one inside chicken named Crow –dogs, cats, lizards, turtles, and snakes. She is a volunteer art teacher at Discovery and will transition to the full-time art teacher next year and is also the Executive Director at the Izaak Walton Porter County Chapter.

Right now her day starts at 7:30 a.m. when she opens the barn up to feed and wake its inhabitants.

She and her sons visit the animals two to three times a day.

“I let everyone out to have their outdoor time and get fed and at lunch time I will sometimes stop in and say ‘Hi,’ and then come back in the evening,” she said. “People ask what I love most about being outside, and this is it. I love taking care of animals. Feeing them, watering them, shoveling the whatever… I love it all.”

Her sons enjoy the animals as much as she.

“He, Xander, is madly in love with the cow,” she said. “He has killed himself in the work. I can just be standing around because he just loves doing all the work.”

A few weeks ago, volunteers from Friends of the Indiana Dunes came out and rebuilt the fence surrounding the barn and Benson is now working on a better latch to keep those four-legged guys inside the barn at night.

“My son and I had a heck of time coaxing Number One back into the barn the other day,” she said. “Once we got him outside, he ran and jumped just like a baby! He was mooing at his buddy the goat… it was just so funny.”

The animals will be housed at the farm through the summer only. According to Hansen this year is to test out the waters. In the past, the farm has housed sheep and pigs, and her sons desperately want a horse, but ‘Who knows right now?’ she said.

“We will start again next spring with young calves, two little guys, and everyone else will come back,” she said. 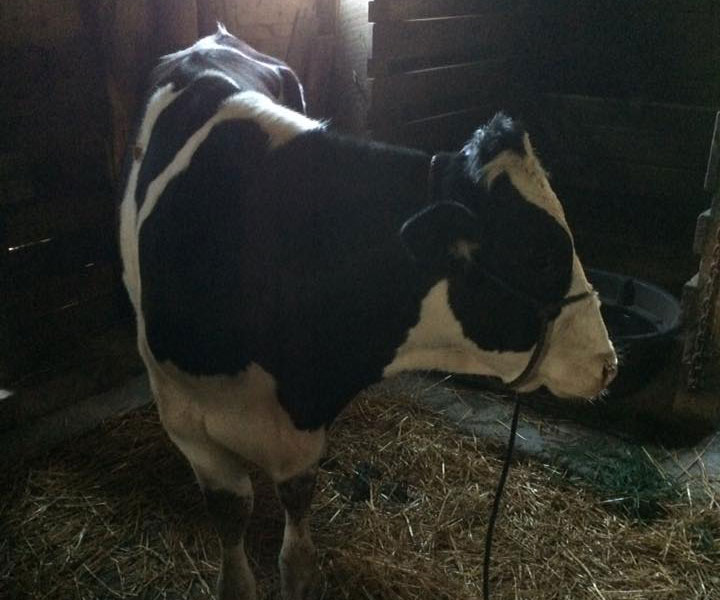 Thanks to these volunteers, Chellberg Farm is coming back to life. Every week there are more ideas and plans on how to engage the schools and public with Number One, the goat, the chickens and the ducks. The DLC is piloting some programs this May with their kids and schools are already eyeing the farm for field trips, Benson said.

“We already use the farm for educational proposes, but with the animals, the farm is more vibrant and beautiful,” he said.

The farm will be used for educational programs, workshops, fun days… you name it, Hansen said.

And, if you’re out on a walk during the day, it is just a place to visit and say ‘Hi’ to the cow.

If you would like to contribute toward the feeding and care of the animals at Chellberg Farm, you can make a donation to the Dunes Learning Center. Go to duneslearningcenter.org and click on the “Give” link.