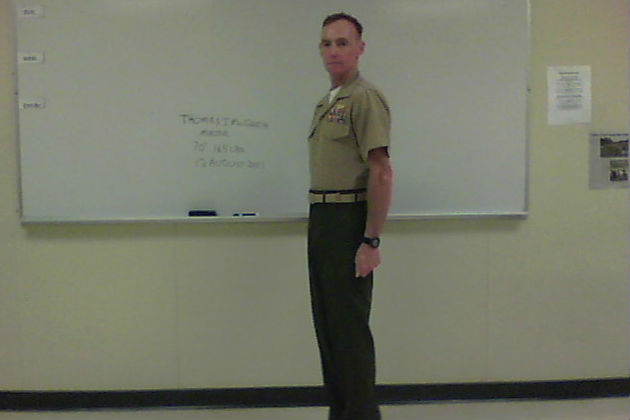 Born and raised in the Midwest, Tom McGrath has always felt a deep sense of service to his community and his country. Previously, McGrath lived in Ohio until five years ago when he moved to LaPorte County to accept a job opening at Michigan City High School as the Senior Marine Instructor for the school’s JROTC program.

McGrath enlisted in the Marine Corps in 1975, and was quickly commissioned a second lieutenant four years later. He served twenty years on active duty and almost three years on active reserve. For the past eighteen years, McGrath has been a Marine Corps JROTC instructor.

“I really didn’t know anything about the program until I got out of the Marines and heard about the opening in Michigan City,” McGrath said. “I did some research, and after finding out all I wanted to know, I decided that it would be a wonderful opportunity to embark upon.”

Five years ago, while McGrath was still living in Ohio, the opening at the school popped up, and word trickled down to McGrath that MCHS needed an officer for their program. He decided that it was a good time for a change and took advantage of the opportunity.

“My wife and I sat down and talked about the idea up uprooting our lives in Ohio, listing off all the pros and cons,” McGrath said. “In the end, we decided that this change would be a wonderful thing for everyone involved, so we jumped on the opportunity.

“The Marine Corps JROTC program is something that the whole community can be proud of,” McGrath said. “It’s a program that few schools in the county have, and is a very vibrant program for everyone involved.”

The objective of the JRTOC program at MCHS is to provide the cadets for any career in their futures. Specifically, McGrath is responsible for teaching, maintaining the Marine Corp equipment and uniforms, and general administration of the program. On a typical day, McGrath gets to the school by 5:15 in the morning and is there until 4:30 in the evening, working meetings, basketball games, football games, and such.

“I love being able to work with the students, and to see them develop in different aspects of their lives,” McGrath said. “When you get a 9th grader, fresh to high school, you get to see them develop and mature as a student and a person, all the way to graduation.”

In his spare time, McGrath enjoys spending as much time with his wife and their five children as he can.