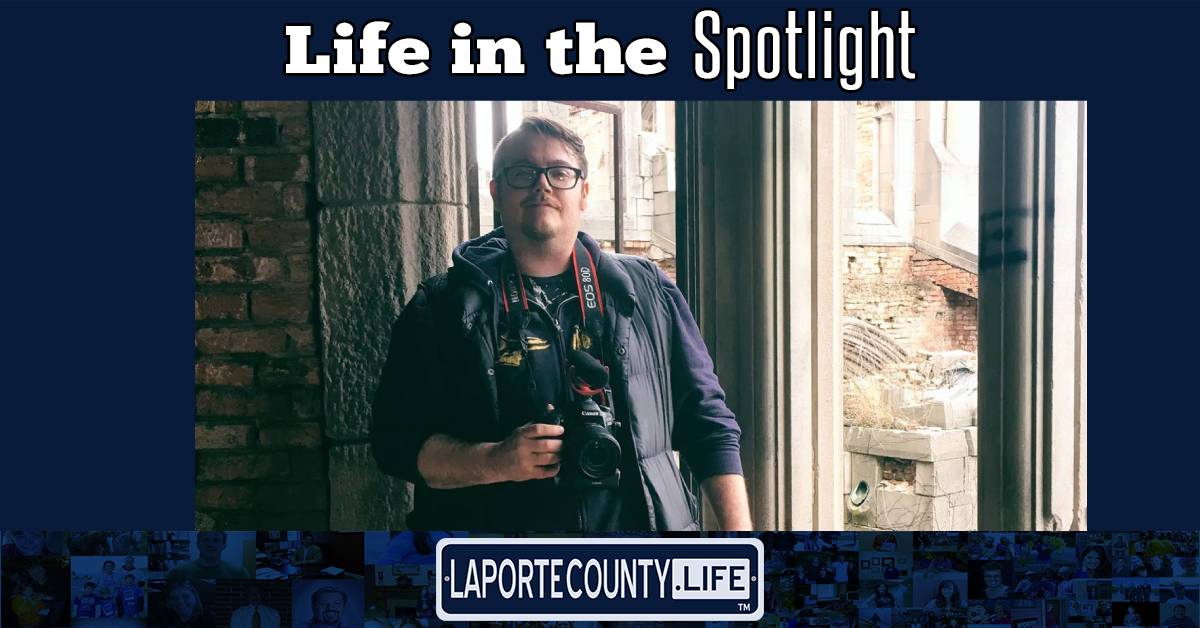 A Media Engineer at  InTouch Practice Communications during the day, and at night, his alter-ego emerges as he becomes Creativity Man --with a donning of the proverbial cape, much like the comic book heroes he loves. Musician, Documentarian, Pod-cast co-host, and much more, Jonathan Wilson lights up some of the gloom of the world with his art and creativity.

“I like to keep busy. I like to make collages; I’m just an artsy guy, it’s what I like to do,” Wilson said. “I have a lot of ideas that pop into my head that I like to pursue.”

Wilson’s origin story begins in Chesterton. A man who enjoys going against the grain of societal norms, he dropped out of High School to get his GED. He moved from job to job, and from place to place until our intrepid hero realized that he could do much more with his life. That decision led him to Purdue Northwest, Westville where he majored in Communications with a focus on media and minor in Psychology.

“There was a moment when I was working three jobs and all I knew was work uniforms and I thought to myself, “I’ve got to do something”, so I enrolled at Purdue Northwest, Westville,” said Wilson.

Currently working in the marketing world, Wilson finds a lot of joy, and creative outlets, in his current position. He enjoys using his videographer skills and is a huge fan of his bosses and co-workers.

“It’s a tight-knit company. I’ve never worked somewhere where the owners literally care about every single person who works there. And every person is extremely creative and as smart as can be,” said Wilson. “It’s incredible to be in an environment where you can bounce ideas around and make them come true. I really enjoy collaborating and working with them.”

When Wilson isn’t working, he keeps very busy. Music has been a constant in his life, and he has taught himself how to play multiple instruments. He enjoys the process of writing lyrics especially and is currently working on a concept album, exploring the ideas and themes of how people deal with set-backs and depression from the weight of the world.

His music is unique as he plays most, if not all of the instruments, laying down tracks for each one and mixing them together. While some of his music has been put out into the world, for Wilson, this is mainly a creative outlet to explore ideas and emotions.

“I just love making music,” said Wilson. “I mostly make music for myself. I’m not trying to break the music scene, I just like doing it.”

Another route of creativity that Wilson pursues is making documentaries. He came up with the idea of creating a series of documentaries highlighting the artists of Michigan City and the surrounding areas. The goal is to make multiple episodes, each one focusing on a band or artist in the community, showcasing their passion and determination. There is a large underground music scene happening, and he is wanting to highlight the talent that is abundant.

“There are so many people who live here and are so talented. I like to see what people are writing and the original music they’re making,” said Wilson. “Hopefully I can do my part to let others know that these people exist. They’re out there working a 9-5 job, and they still come home and have enough energy to make art and do something they love. I want to tell that story.”

For a man as creative and artistic as Wilson, it’s no surprise that one of his favorite areas in Michigan City is the Uptown Arts District. It is here that our Creativity Man can wander the streets, visit the many art galleries, and feel at one with the creative world. Having access to a blossoming arts and music scene is one of the major perks of living in Michigan City for Wilson.

“Michigan City is so diverse and there’s usually always something going on,” said Wilson. “The downtown area is cool and historic. Living here has been the greatest time of my life. I’m hanging out with cool people, and I’m meeting new ones all the time. There’s a good environment here.”

Wilson also enjoys giving back to the community and has volunteered with local organizations. He has spent time helping others who are seeking to attain their GEDs by tutoring them and helping them study so they can go on to fulfill their goals and dreams. He had also given his time to work with food pantries and other various community organizations.

“I’m a big believer in giving back as much as I can,” said Wilson.

Wilson’s desire to spread joy and beauty through creativity makes him the unsung hero that we never knew we needed. It’s his artistry and passion that make him a truly unique person who’s using his talents and skills to help make the world a better place.

“I try to always stay humble. I do what I do, and it’s who I am,” said Wilson. “I try to keep a child-like perspective of the world, always seeing something and trying to be as creative as I can be.”