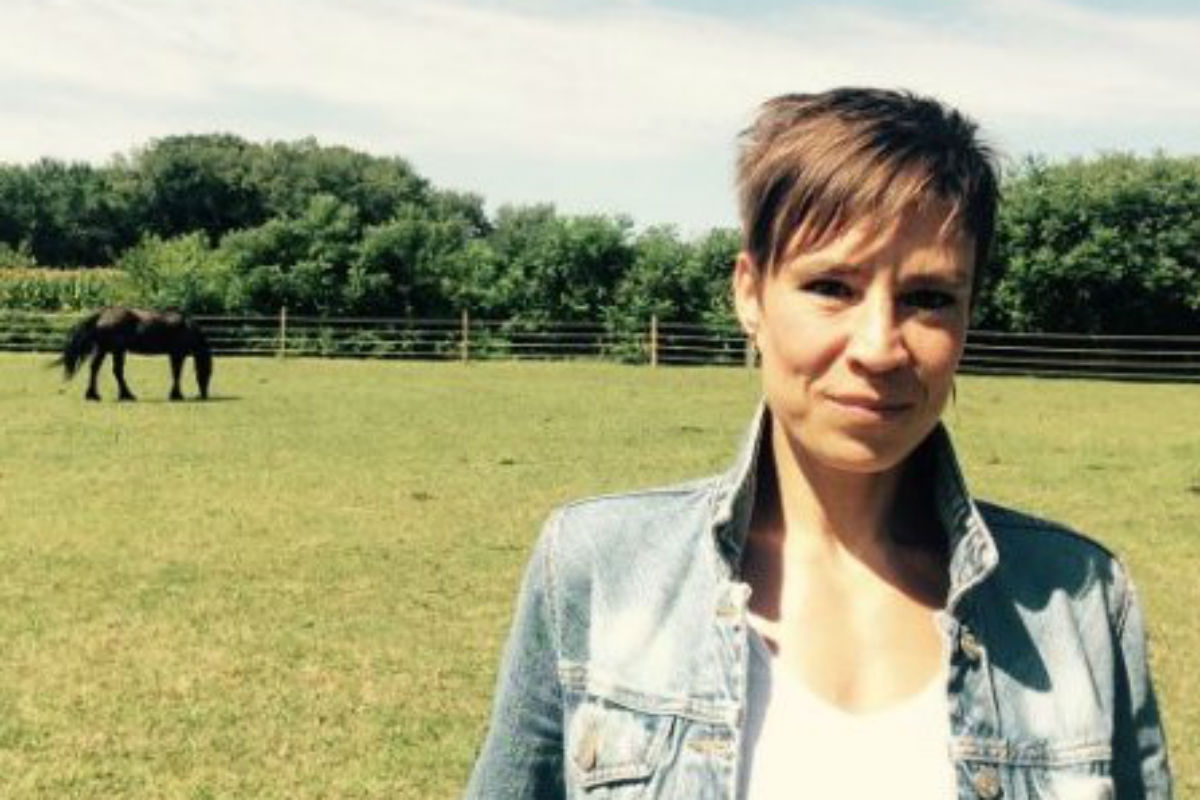 Deauke Robbens moved to the States from Belgium just two summers ago, in June 2014. She wasted no time in making a place for herself in the community. Her business, Barn Santé, is open to any and all who wish to improve their emotional health as well as their bodies.

Deauke’s husband, Renaat, works for a company named Renaat that has locations all over the world. When their Belgium factory closed they offered Renaat a position in China or the United States. It took some convincing for her down to Earth husband, but Deauke was eager to try at least a couple years in our country.

When they first moved to Indiana they stayed at the Blue Heron hotel for three months. Deauke had three goals: find a house, work out, and convince her husband to let her have a dog. It took a good deal of searching, but Deauke found a lovely home in the La Porte countryside.

She has also found quite a few things that she like about the town.

“Everyone knows everyone. I like the little lakes here, and I am surprised there are so many. I like that there is a downtown but also a countryside. We have great neighbors, they help out with the horses when we need to go out. We have privacy, but we are not alone.”

Getting a dog was a little easier. Deauke started volunteering at the animal shelter in Valparaiso.

“To be honest, I was a bit selfish doing it,” she explained, “Because I love dogs. I hate seeing them in cages.”

She fell in love with each dog she saw, and in no time was talking to Renaat about fostering one. He compromised with getting a dog of their own.

With two things crossed off her list, Deauke was left with one: working out. For her it is not just a hobby but a way of life. It has even become a career for her.

She started out taking group classes at the YMCA in La Porte.

“I felt like something was missing. I thought it was a personal approach. [The instructors] were doing their workout and the other people just mimic.”

“I have this personality that I see things and go I can do that. And I can do it better.”

The first step was getting certified in High-Intensity Interval Training, through a facility in Chicago. The second was creating her own training routine that would motivate her clients. Then she dubbed her business Barn Santé and it has taken off from there. Deauke already has a loyal base of patrons that come for weekly sessions.

For Deauke, it does not stop there. She has added more classes, brought on other instructors, and even hosted a small vendor expo. All of this is done in the heated comfort of her lovely barn.

“If there is an opportunity,” she said, “Then I jump. Some of them are bad decisions. This was a good one.” Owning a business comes with a lot of risks, like partnering with a local aerial yoga trainer. “It felt so right. I rely on intuition a lot, so if it feels right, I do it.”

One of the new programs Deauke has started at Barn Santé is a relaxation workshop meant to bring people closer to each other and closer to nature.

“This is worth so much,” Deauke said. “And it’s so simple. To be able to open people up in such a short time, I was proud of myself.”

The goal of Barn Santé is to teach people how to respect and value nature. That includes themselves.

“When you love your job, you reflect that. It makes it deeper. When people see that, it makes them value it too.”

Part of the syllabus at Barn Santé workout and workshop sessions are interactions with the Robbens’ horses. Deauke has built them a Paddock Paradise: a natural paddock concept that encourages the horses to get more exercise and live closer to the way they do in the wild. They are never locked in stalls and enjoy constant freedom. Deauke is hoping to host other horses in the future, with people willing to let their horses be a part of her workshops.

Barn Santé is a training center for the body, mind, and nature. Sante is the word they use in Europe when clinking glasses, instead of saying cheers. It is a celebration of health, happiness, and life.