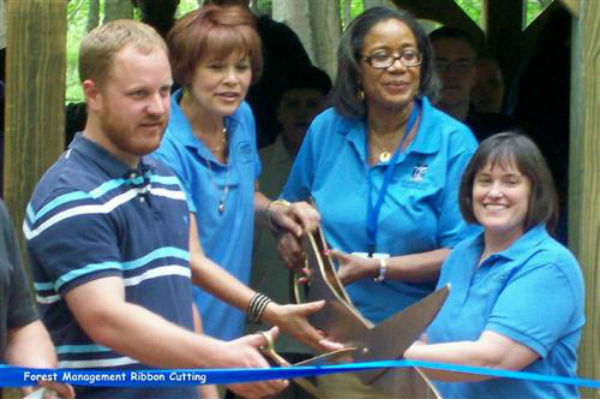 Vera Jones is a problem solver. She saw a lack of intellectual stimulation and “green” initiatives at Krueger Middle School. She answered by combining her passion for education and the environment and restructured the way kids are taught through hands on and relevant subjects. Her new paradigm of teaching at Krueger Middle School has transformed the middle school landscape. What was once an awkward time of monotonous learning has become an engaging experience of mature and independent studying. The results have been astounding and the journey there equally captivating.

Jones was born in Chesterton, Indiana, where she attended Brummitt Elementary School, Liberty Middle School, and Chesterton High School. From there she earned her bachelor’s degree in Physical Education Health and Science from Manchester College and pursued her master’s degree in School Administration at Indiana University. According to Jones, her father was a teacher and it was just something that her family did. Over the past 18 years, Jones racked up a long and impressive list of educational stations within the school corporation that all led her to her current position as principal. She started teaching 9th grade physical education and Quest at Michigan City Jr. High, from there she moved to 8th grade physical education and 7th grade science. Next, she taught integrated chemistry physics an environmental science where she was the head volleyball coach. Next, she served as the curriculum coach and director of curriculum instruction for special education in the district. She then served as assistant principal at Krueger Middle School for three years until moving into the position of Principal.

“The environmental science center is my favorite part about being at Krueger. The fact that we are able to take 102 acres of land and restore it and renew it to its natural habitat,” Jones foreshadowed.

During her tenure as assistant principal and now principal, Jones, with the help of her staff, implemented big changes that produced big results. There was a need for more personal help during school. With a bit of restructuring, she was able to include a 30-minute success time at the end of the day and time during lunch that either provides additional academic support or enrichment.

Financial issues have been the biggest setback to implementing changes and projects. Jones explained, “The support is there, but financially it is very expensive for us to do restoration projects, so we have been doing a lot of grant writing.”

But this was only the beginning of Jones’s handiwork. Now let us move to the pinnacle of Jones’ success at Krueger- the environmental science center. The school has currently finished the first three phases in their project. Thus far they have built a bird trail with 12 learning stations that is visited by first and fourth graders in the district, a forest management trail that is visited by fifth graders, and the ongoing savannah prairie. Restoration on two wetlands will begin in the spring as well as an educational water facility including rain gardens. In the future they plan to build a butterfly garden.

The inspiration for the project began when Krueger responded to the Superintendent’s request to choose a school specialization-Krueger chose environmental sciences.

“The current principal and I looked at each other and said we are on 102 acres, and there is no reason that we should not use that. With my environmental science background that made the final push,” said Jones.

The environmental focus has not just benefitted the ecosystem but the students as well. Jones elaborated, “We have seen a lot of changes in our students. They show a lot more ownership in the building. We do not have vandalism on any of our trails which we account for that fact that our students built the trails themselves. They are very protective. Our test scores have gone up 40% within the last three years-in particular our science scores. Our discipline has gone down by 50% in the building. We have seen a lot of growth in our kids.”

This is because as the habitats that the students built grow, so do they. Throughout the process the students learn leadership skills and ownership for their work. This dosage of science, innovation, leadership, and environmental science classes is an integral part of the daily curriculum.

“The students actually facilitate, build, maintain, and serve as the teachers for all of the environmental projects at the school. Our sixth graders work on water quality testing and built a rain garden, our seventh graders work on air and land pollution and participate in beach cleanups and soil testing, and our eighth graders do all stewardship and restoration,” Jones explained.

The curriculum even extends further. The wellness class has a strong emphasis on leisure activities such as orienteering, archery, snow shoeing, and fishing.

“We also have our environmental technology class in conjunction with our advanced tech class. They are currently working on what energy sources we can use on the building that will be most suitable. The kids will actually get to decide which is best or if there is a combination-wind turbines, solar, geothermal,” remarked Jones.

She occupies much of her time at school; however, when off duty she enjoys relaxing and soaking up every moment with her family. She does make time to serve as a liaison for the Trail Creek Watershed Committee and squeeze in a game of golf. For Jones, the future of Krueger Middle School is bright, she closed with, “Krueger is a really good place to be. Our kids get an outstanding education, and I would challenge anybody to find a middle school that does what we do and can teach the kids what we are doing. Anybody interested in having their kids go here just needs to give me a call.”