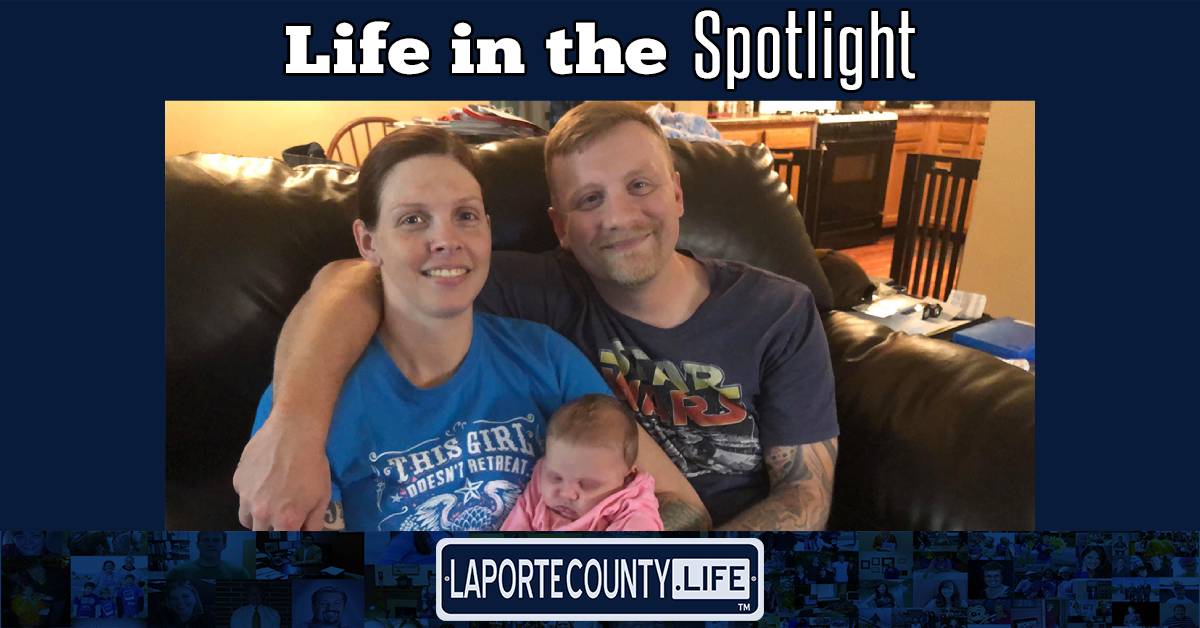 There’s a trick to catching Tim Darenski for a quick chat: wait for nap time.

Darenski and his wife Elizabeth recently welcomed their daughter Lily into the world, and life has been both hectic and heaven ever since. “People say you should sleep when the baby sleeps, but it doesn’t always work out that way.”

Darenski, a corrections officer, met his wife at work. She was preparing for her first deployment; as a veteran, Darenski was happy to help her prepare for what to expect.

“I was a truck driver in the Army,” Darenski said. “My wife was an engineer and reclassed to an MP. If we would’ve run into each other in the military, she would’ve been pulling me over and giving me a ticket.”

“It’s pretty neat because we became friends,” Darenski said, “Then there’s about a year gap where she served. When she came back home, we ran into each other, slowly started dating and then got engaged. After 11 years of marriage, we are so excited to have our first child.”

Darenski, a 13-year Army truck driver, served two tours in Iraq and finished his military career at the rank of sergeant.

“I wouldn’t trade my military time for anything,” Darenski said. “I feel like it’s made me the person I am today.”

Darenski had wanted to serve in the military as long as he could remember.

“My grandfather served in World War II,” Darenski said, “and my father served in Vietnam. Then, I served in Iraq, so the men in my family have fought in every major war for three generations.”

Although his grandfather passed away when Darenski was very young, his brother, who had a close relationship with the hero, received a lot of his memorabilia. Recently, Darenski received some photos of his grandfather’s service and put them together with photos of himself and his father to showcase the three generations of service.

After putting in six years of active duty and seven in reserves, Darenski decided to leave the military before qualifying for retirement.

“A lot of people ask why I didn’t do the last seven years,” Darenski said. “After my last deployment, it was time for me to finish up. I knew what staying in would entail and what we wanted to do with our lives, and I knew that it was just time to move on.”

A friend from the military had been doing corrections and suggested it as a career opportunity. Darenski got into it and hasn’t looked back since. It is, after all, how he met his wife.

At the time, Darenski lived in Griffith. When he and Elizabeth started dating, he moved to La Porte, where she’d lived her entire life, and that’s where they’ve made their life together.

“We both enjoy it out here,” Darenski said of La Porte. “We’ve got great hunting.”

Duck hunting brings together so many of Darenski’s passions. He used the GI Bill to get a degree in gunsmithing and has taken a few courses in dog training.

“Two things I really like are dogs and shooting,” Darenski said. “Duck hunting brings them both together.”

He and Elizbeth have four dogs: three dachshunds and a beagle.

“Our beagle is 12, but he’s always enjoying hunting rabbit, goose and dove,” Darenski said. “I took him on his first pheasant hunt recently and he did OK for an old man. Still, he’s a nice compact size.”

Darenski goes hunting with Elisabeth’s family, and they usually bring her uncle’s lab. But at almost 9 years old, the lab is starting to age out. Her father is looking to get a hunting dog soon, and Darenski looks forward to getting the opportunity to train it.

“Some dogs have a soft mouth naturally,” Darenski said, “but it takes a lot of patience and hard work to get it right. At the end of the day, though, it’s worth it.”

Darenski’s love of dogs is plain as he speaks about the heart of the matter: communication.

“What got me hooked was the first time my dog ‘got it,’” Darenski said. “When you click with a dog like that, and you realize you’re actually communicating with each other, there’s no feeling like that.”

As a new father, Darenski is in for a lifetime of exactly those feelings, though. He already beams when talking about his newborn daughter. Soon she will be laughing at his raspberries and discovering her own feet and learning how to properly pet the pooches. The depth of their communication will hold his heart. But until then, there will be naps.