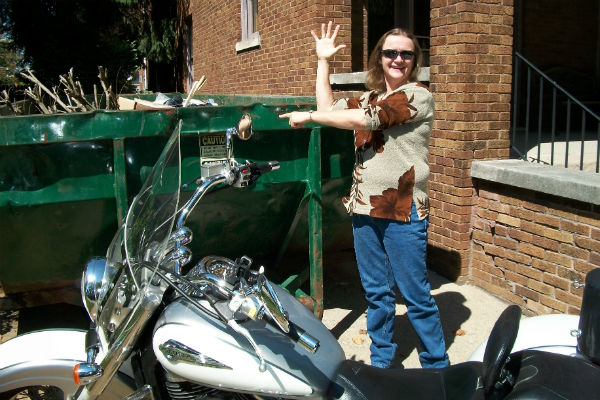 Sonshine Troche has used her unfortunate life circumstances to fuel a positive drive to advocate for women who have faced similar circumstances and desperately need hope.

Troche is passionate about her mission to “empower, educate and equip women to go out and be recovered from addiction.” The women she works with have been dragged down by drug and alcohol addiction, physical and mental abuse and poverty. Troche reaches out to them when they are in jail with few options in their future.

Troche had followed a similar path. A native of Germany, she was abandoned by her mother and left in an orphanage until she was eight years old. Her mother married a Vietnam veteran and moved with her daughter to the United States. But the fresh start didn’t overcome Troche’s anger, which, coupled with physical abuse, led her to depression and substance abuse at a young age.

Fast forward to 1995. Troche was in her early 30s and living in Prescott, Ariz., where she was addicted to meth and working as a drywall hanger. She reached a turning point when she almost shot someone in what, at the time, she considered self-defense.

“I was hardened,” she said. “I didn’t care. Drugs just make your mind hard.”

But Troche soon found out that her Christian landlady, JoAnne, did care. JoAnne knew the judge and was able to convince him to drop charges of attempted murder. Troche managed to avoid prison by what she considers the grace of God. She kicked her additions and has been clean and sober for 17 years.

Troche left Arizona when she found out she could make three times more money hanging dry wall in Indiana. In 2005, she joined the Christian Motorcyclists Prison Team Ministry and started sharing her story with prisoners at Westville Correctional Center and other Indiana prisons. She became certified with the Moral Reconation Therapy- MRT, a behavioral treatment system used with offenders and other at-risk groups, and has facilitated the program at the La Porte County Jails since February 2008.

Troche’s past gives her credibility with the addicted women.

“I give them hope because I tell them, ‘I see something good in you,’” she said. “When I get in front of them I can see their potential. I just say, ‘If I can make it, you can make it.’”

Troche had joined the La Porte County Drug Free Partnership in 2007. She enlisted like-minded people to form the Worthy Women Recovery Home in 2008. A year later, it officially became a nonprofit organization.

On Sept. 5, Troche received one of three annual awards given by the La Porte County Drug Free Partnership for individuals who work in the fields of treatment, prevention and justice. She was recognized for her work with women who are or have been recently incarcerated or have recurring arrests because of substance abuse addictions.

Sept. 7 marked the one year anniversary of the closing on a building on Maple Street in La Porte that is slowly being transformed into the Worthy Women Recovery Home. It will be a 14-bed recovery home for non-violent former female offenders with substance abuse problems. They will work, pay rent and take care of the residence.

So far, more than 160 volunteers have helped gut the house and this fall a new roof will be added by contractors who are donating their time. Additional money is needed to move forward with extensive repairs and renovations, Troche said.

Women coming out of jail need a support system to keep them from going back into jail, Troche said. Her plan is for every woman coming out of jail to have a Christian Mentor to help them adjust. Until the house can be occupied, a weekly follow-up program she calls Worthy Hope is held at the La Porte County Public Library.

By funding the Worthy Recovery initiatives, Troche said people are not funding her but, rather, are helping the entire community.

“You are increasing the productivity of the community and decreasing the tax burden and recidivism,” she said. “You’re breaking the chain that binds kids who’ve seen their mothers in jail and that becomes normal in their minds. They end up in foster homes and in the social services system. We don’t have a system to stop it.”