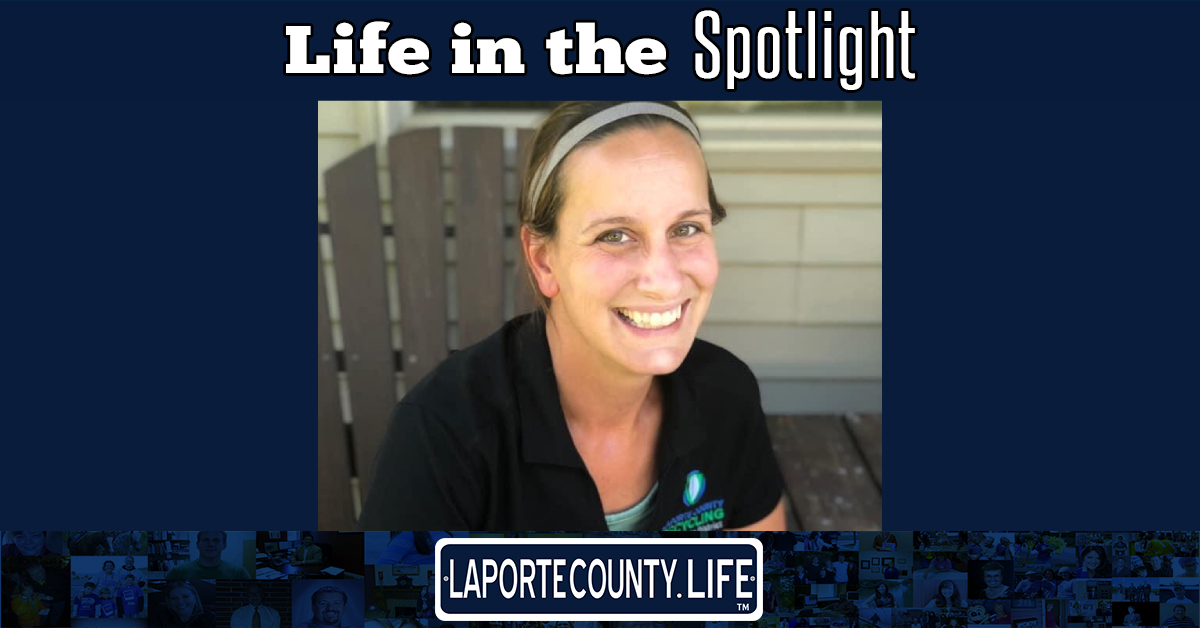 Sacha Gee Burns has nearly always made her living through the Earth in one way or another. She currently serves as an environmental educator for the Solid Waste District of LaPorte County after doing organic farming for over a decade.

“I get to go around and teach people how to recycle properly and how to compost. A lot of people don’t realize you can compost your own food scraps, and even shredded paper,” she said. “I also try to teach people about household hazardous waste.”

Green jobs were in her blood as she followed in the footsteps of her parents and grandparents.

“Growing up, my mom and grandpa had a chrysanthemum farm,” she said. “I had really bad hay fever, so I was convinced my mom was trying to kill me. I convinced her to switch over to perennials and we started doing farmers' markets. From there, I took some master gardener classes and fell in love with heirloom vegetables and we switched to that. At one point we had over 75 varieties of heirloom tomatoes.”

Her vast array of tomatoes earned her the nickname “Tomato Lady” with some of the locals. She also worked side jobs, giving presentations and educating others about gardening, composting, and more topics that helped prepare her for her current position at Solid Waste District.

“Not everybody has the same experience growing up,” she said. “If you’d never been introduced to playing out in the dirt or having a garden, it’d be hard to realize just how enjoyable it can be. The idea that you can plant a seed, grow it into a mature plant, and then eat whatever you produced is pretty much one of the coolest things in the world.”

At one point, she enjoyed the opportunity to teach after school horticulture classes at the Barker and Krueger Middle Schools in Michigan City.

“It was really cool watching kids learn about stuff like that,” she said. “I’d taken all of it for granted, having grown up on a farm. They were experiencing stuff for the first time, which will stick with them for the rest of their lives. Once you learn how to grow something, how to make your own food, I think it gives you confidence in other areas of your life.”

As an environmental educator, Burns highlights ways people can be more caring for the environment and their community. Some items cannot be placed in the usual weekly recycling bin, others need special treatment before they can be disposed of.

“There are a lot of things in your house that are hazardous,” she said. “Someone might buy a bottle of Lysol cleaning spray, look at it years later, decide it’s probably not good anymore, and pour it down the sink or toss it into the trash. That can hurt your septic tank if you have one, and the water treatment plant can’t treat those synthetic chemicals, so it’ll hurt their systems. If it goes into the landfill, animals like seagulls might carry that off. It’s amazing how many items like that can affect just by being in the wrong place.”

Most of the time, people had never had anyone tell them that information before.

“They usually seem really surprised, and often seem to feel a little guilty when they shouldn’t,” she said. “How do you know that stuff if no one has ever told you? How would you even know to look for it? It’s not the kind of stuff that comes up in everyday conversation. What I always tell people is, ‘let’s be better.’ I always tell them to reach out to me, and I’ll help them figure out where they can dispose of something.”

Burns was born and raised in La Porte and still lives there today with her two daughters.

“Once a Slicer always a Slicer,” she said. “It’s one of the coolest towns because people go out of their way to help each other. I’d never have thought to take my daughters anywhere else.”