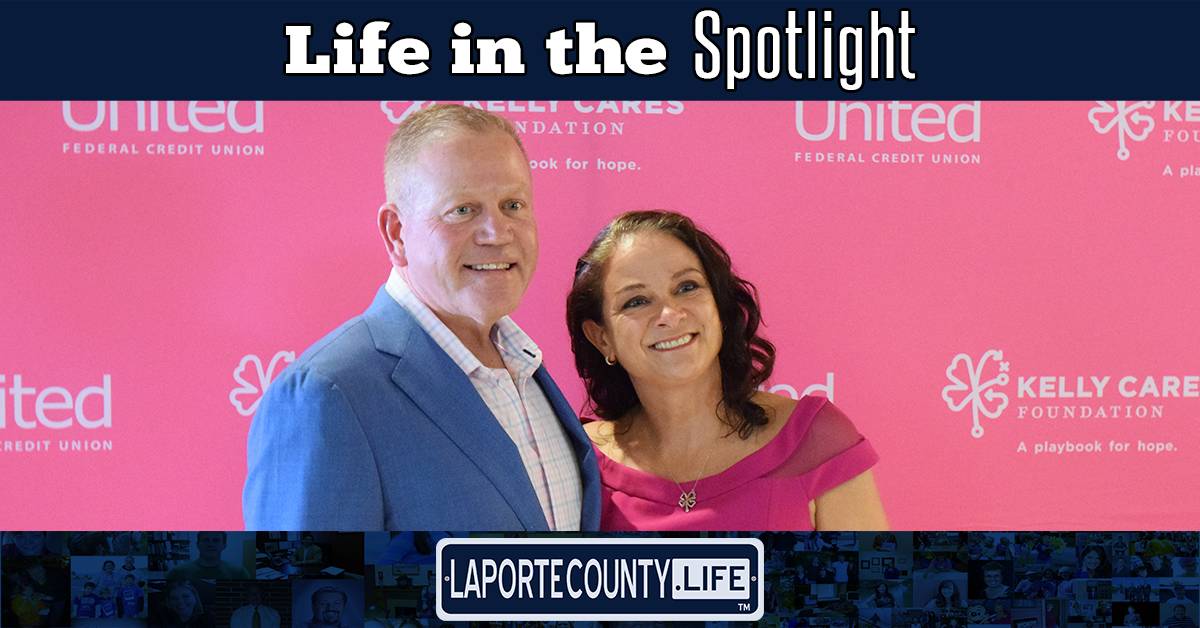 Paqui and Brian Kelly may be two of the most well-known names in the Michiana area. Between Notre Dame football and Kelly Cares Foundation, the two are nothing short of local celebrities, but Paqui never thought this is where she would be today. From a high school teacher to the face of the foundation, Paqui thanks God for the path He put her on.

In 2003, when Paqui received her first mammogram at the age of 36, something wasn’t quite right. After three or four months, she was convinced that the lump in her breast was getting bigger, so her doctors decided to remove it. It wasn’t until then that the cancer was confirmed.

“The hardest part about it was that it’s very foreign to you because it happens to everybody else, and I had three kids under the age of 5,” Paqui said. “I go through treatment, then two years later my sister gets breast cancer and tests positive for the BRCA 1 gene,” she said.

That positive test meant that her sister had a mutation in the BRCA 1 gene, which put her at higher risk for developing breast or ovarian cancer compared to someone without the mutation.

Paqui also had the test and learned she, too, was positive for the BRCA 1 mutation. She said it meant that there was an 85-percent chance that the cancer was going to come back before her five-year cancer-free milestone. She was right. Paqui was diagnosed with breast cancer again nine months before the five-year mark.

“For me, it was good in a way because that meant the statistics were true and someone making [treatment] decisions could be more confident in those decisions,” Paqui said. “So we went through round two and scheduled the double mastectomy for spring break.”

All six of her sisters were there to help her through her surgery and Paqui was up and running five weeks later. All of this was taking place in Cincinnati as her husband Brian was preparing for his new job as a football coach at Notre Dame.

“Just before I got sick the second time, we had started paperwork for the foundation and not even six weeks later I got diagnosed,” Paqui said. “I kind of laugh because we were trying to sell two houses, transition into new schools, and kind of start and rebrand the foundation during all of this.”

Kelly Cares Foundation is a small nonprofit with a big mission. The goal of the foundation is to build stronger communities through education and health. They’ve worked with parks, schools, cancer research institutes, and more than 200 community organizations in the last 11 years.

The Kelly Cares Foundation’s annual Football 101 program helps parents who know nothing about football, learn more as their sons play. It started with just 42 participants in Cincinnati. The next year it doubled and then doubled again. But when the Kelly family got to South Bend, they had more than 300 participants in the first year and it continued to grow to over 600.

“It was very fun and empowering, and it’s like all of the wind hit you at once. We were a little bit overwhelmed initially just because of how quickly it grew, but it was also God’s blessing in the same sense because we were able to make such an impact over that time period, too.”

Paqui was a chemistry teacher for more than 13 years and realized that not all teachers have the tools they need to help students succeed. So when Paqui and Brian had the idea to start a foundation, they wanted to be able to help as many people in as many areas as possible.

“There were times we wanted to help some people and we couldn’t because the mission of the nonprofit was so defined,” Paqui said. “So we left our [mission] open. We sometimes get questioned, like, ‘what is it you do?’, and we always say, ‘everything, anything we can.’”

The group intentionally stays small, without a large board, so they can focus on grass-roots efforts.

“If something comes up, like hurricane Katrina, we make phone calls to three people and see what we can do to help,” she said.

Paqui and Brian are proud to be such a huge part of the South Bend community, which welcomed them with open arms and has supported them every step of the way. Paqui couldn’t be more thankful that this is where God has led her.

“There are so many wonderful people that I’ve met here, and He puts people in our pathways for the right reasons, helping us grow as individuals,” Paqui said. “But to be able to do what we’ve been able to do in 10 years was far beyond anything conceivable.”