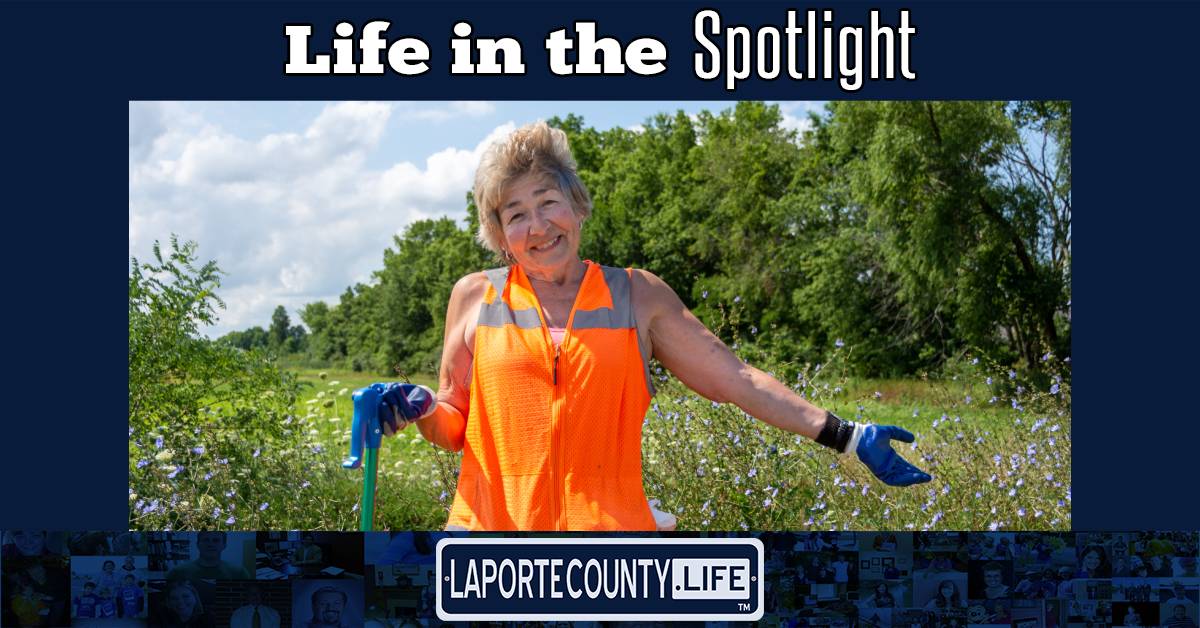 Making Michigan City beautiful, one street at a time - a profile of Nora Daurer Schultz

Nora Daurer Schultz pulls her trusty red pickup off to the side of the road, just south of the local Walmart. Pulling open the tailgate, she dons her work gloves and grabs her supplies.

“This is my ‘hobby,’ as I like to call it,” Schultz says with an irrepressible smile and positive, “can-do” attitude. A regular sight along the roads in and around Michigan City for the last decade, Schultz donates her time to picking up trash along roads and parking lots, with more than 270 bags done, and counting. Passers-by often honk and wave whenever they see her out along the roads.

“I started out small,” Schultz says. “There was a man who lived on South Roeske Ave who used to pick up trash along his road from Welnetz to Highway 20. When he moved away, you could tell.”

Born and raised in Michigan City, Schultz lives in town with her husband. They have two children - one still lives in the city and the other is stationed in California in the Navy.

Schultz is incredibly active, not just in the community, but in her life.

“I love to be up and about, doing things. If I’m not at work or out here picking up trash, I’m at the gym.”

Schultz often focuses on the area around Meijer, near the Aldi store where she works, or along Welnetz Road.

“That’s such a pretty area, such a pretty road,” Schultz says. “But I’m all over the place. Wherever I see an area that needs to be picked up, that’s where I go.”

Although they are used to her “hobby” by now, Nora says that her friends and relatives were at first perplexed by her decision to go out and clean up the town.

“They asked me all the time, ‘Why? Why do it?’ If you have to ask me why, then you’re not seeing the problem. I saw the problem, and I also saw that I could either be part of that problem, or I could be part of the solution.”

After ten years of making it her mission to be a part of the solution, Schultz has her routine down to a science. She carries a well-outfitted array of supplies including an orange safety vest, gloves, lotion, bug spray, toboggan (which she uses to pull supplies and bags full of trash), and, of course, a good quality grabber tool that is an absolute necessity.

“The ones I’m using now are the best I’ve found. Kabelin’s Ace Hardware sells them. They last forever and I can pick up a dime with them,” Schultz says, proudly.

Schultz prefers to use 13 gallon-size bags because they cut down on the weight and the bigger ones can get too heavy.

What does she do with all that trash once she bags it up?

“In the beginning, I used to take it home and throw it away. As time went on, I got more businesses to support me, offering to let me use their dumpster. There are a lot of businesses here, offering to help and I’m grateful for their support.”

Whenever Schultz finds lost items, she tries to reunite them with owners. She also separates and recycles the aluminum cans she picks up.

“I always try to find a bright spot, no matter what. Sometimes, you don’t even have to look that hard. Even when people say that it’ll only be clean for five minutes, I say yeah, but for those five minutes, it did look darn good, and I feel darn good about myself for doing it.”

“This isn’t something that everybody does, but if doing this makes some people think twice and be more careful about their trash, then it’s all worth it,” Schultz says.