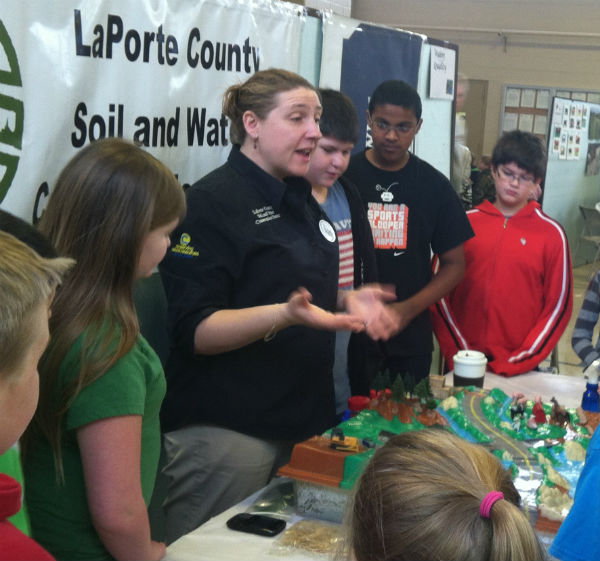 Educating the county’s youth in conservation and other environmental issues is paramount, and Nicole Messacar, education coordinator for the La Porte County Soil and Water District, has been at the forefront of that effort for the better part of the last decade.

“We try to visit schools quite a bit,” Messacar said. “We have teachers that really know what they want from us and others that call up and have us work on projects with their classes. With education, you are trying to teach these kids to have an appreciation for natural resources and then work with them as adults to fix some of the problems that have been caused by some who have not had a connection with the natural environment.”

Although she did not begin her job with the Soil and Water District until 2006, being an advocate for environmental education and issues has been on Messacar’s mind for as long as she can remember.

“I grew up spending a lot of time near Lake Michigan in Michigan City,” she said. “I quickly realized I didn’t want to be anywhere else and would always be connected to the environment.”

Messacar, a 1995 graduate of Elston High School, has worked as an intern for the Save the Dunes Council and studied environmental affairs at Indiana University. Studying at IU, she says, was what gave her the idea to begin a career in environmental outreach.

In addition to educational outreach, Messacar is a major player in the project to protect the Trail Creek Watershed - an effort originally begun in 1999 to improve the water quality in Trail Creek, which connects to Lake Michigan in Michigan City.

At the forefront of the Soil and Water District’s involvement in the project, Messacar wrote a grant application some years back that results in $200,000 being set aside from the Indiana Department of Environmental Management (IDEM) to implement the goals of the Watershed Plan, which had been put on hiatus due to ongoing legal issues with the Michigan City Sanitary District.