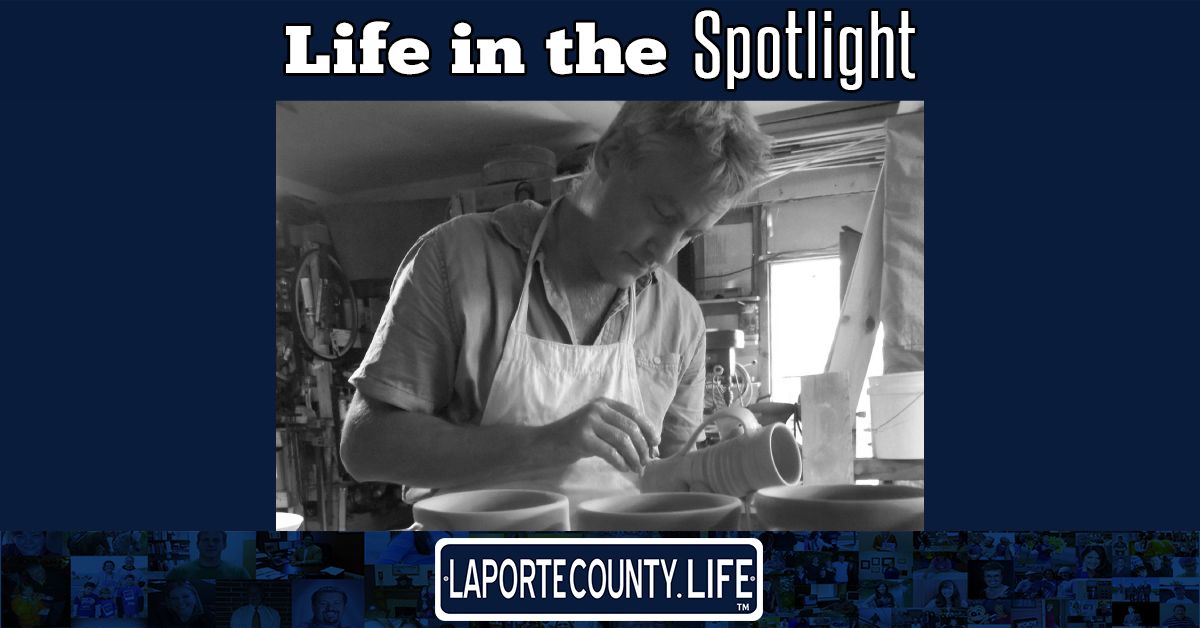 Playing around on his uncles’ dairy farms when he was younger, Jon Hook has always frolicked and relished in the beauty of the green farmlands of Indiana’s rural areas, areas that his heart grew fond of, not where he actually grew up.

Co-owner of Hook Pottery Paper with his wife, Andrea Peterson (a paper and print artist in her own right), Hook’s journey began in South Holland, Illinois, the same place where his love of pottery first ignited.

“I went to Thornwood High School, and that’s when I first started throwing pots. I had a high-school teacher that was really awesome, really in love with pottery. She let me come into her classroom whenever I wanted to,” Hook said. “She even bought some pots from me last year and was so excited to see that I was still doing it.”

Hook’s passion grew during his time at Hope College in Michigan, where he studied ceramics and English. Graduating from there, he worked for a production potter for a year, making coffee cups and doing other various tasks around the studio.

Hook cited his traveling between different studios as one of the biggest components of his active learning. Being a free spirit, he also spent eight weeks in Europe around this time, backpacking through breathtaking landscapes like The Netherlands.

Travel in general has allowed him to become more of who he is, as it’s necessary for new experiences, and foreign ideas to reach the mind, expanding one’s knowledge in the process.

Now that he operates his own business, he’s able to harness what he loves every day. And it’s been a joy for him to wake up each day ready to take on what’s in store.

“I love the work, that’s for sure. Because of how vigorous it gets, with putting up wood for the house’s heating, for example, I don’t have to go to the gym to get a workout. We’re constantly doing these complex, long-term processes. We look toward the long-term pictures and do a lot of planning,” Hook said.

“With processing clay, something I do frequently, there’s so much that goes into it. Like screening it, getting sand and rocks out of it. The more I research and do those things, the more it allows me to get results after such a long time,” Hook continued. “Other than that, I love to throw pots and build kilns. There’s a lot of complexities to it all, but I love it all; it’s awesome.”

Outside of the seemingly endless tasks that he has to complete around his studio, Hook is doing promising work. That work could be said to be on a bigger scale compared to other tasks. His theme throughout it all seems to be sustainability.

“My son, who I work with a lot and because he’s no longer tilling, is actually working with the soil and thinking more about the microbes in the soil, not disturbing them as much, which keeps him composting a lot of the waste products that we have. That whole process fertilizes the ground and makes any field richer. That’s basically the sustainable farming process,” Hook said.

On the topic of family, Hook has been fortunate enough to grow closer with everyone around him. Yet he did not sugarcoat the intricacies of balancing healthy family life.

“Yeah, it’s always challenging. But we recently sat the boys down — they’re 23 and 25 — and decided to call our family an autonomous collective. That means that we all agreed that everyone has to pull their own weight,” Hook said. “We have a pretty special relationship, all of us, and we’re always helping one another out.”

Through the combined efforts of his family’s work ethic, Hook has high hopes for the future. He wishes that people show some more concern for one of the most neglected occupations.

“I hope people start to listen to farmers, especially organic farmers, because I think they’re the answer to a lot of the climate issues we’re having,” Hook said. "There’s going to be a lot of food issues coming up, and we’re going to have to deal with them as a community. I feel very fortunate to live on the farm that we do and to help with the growth of the food. It’s a magical process. In that way, I think the biggest part of what I do is staying connected. When we first got here and started up, we truly tried really hard to meet with neighbors. Fortunately, we got to meet a lot of local farmers, and from that, so many resources. Farmers are knowledgeable about many things, and that’s why I hope to think what we collectively do is important."

Though his line of work is demanding, and the dutiful Hook is surely keeping himself busy, there are additional joys that he delights in when some spare time is granted him.

“I really love to do a lot of drawing,” he said. “Even relating to things from my college days, I still write some poetry. Also, I could make some really great sourdough bread.”

To get a glimpse into the creative side of Hook and really explore his knack for all-things pottery, you can check out his website at https://hookpotterypaper.com/, where you can find out about where his shop is located and other critical information.