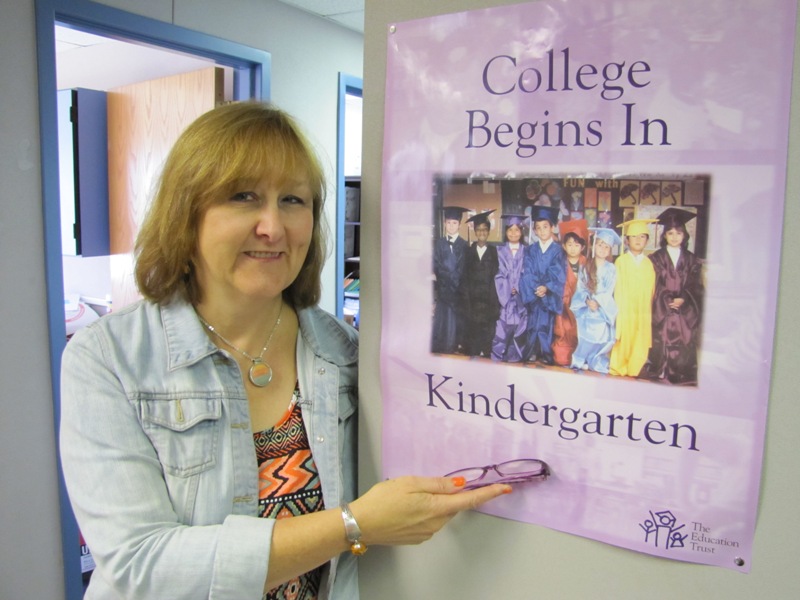 For Radford, education is a gift that everyone should receive. She believes in the importance of a clear pathway for students to be college and career ready, and strives to make a difference in the lives of children among the corporation.

As a child, she herself grew up in Hudson Lake, and went to school in New Prairie. She currently resides in Michigan City.

"I love the summer in La Porte County. I live four blocks from Lake Michigan, so I love walking on the beach and finding beach glass. It is a great place to garden; it's just lovely. The winters, not so much. [What I love about the people] is their openness and friendliness," Radford said.

The path to Director of Curriculum wasn't a direct one, and Radford found many stops along the way. Once she completed high school, she majored in education and received her Bachelors and Masters from Indiana University. After college, Radford stayed in southern Indiana, and married her husband, Steve. Together, they started a family and began raising their two kids, Nikki and Adam.

Radford began her career as a school psychologist in southern Indiana. When her children were little, she stayed home quite a bit and then started working part-time on contract work from Indiana Department of Education. Her office was located at IUPUI. While she was there, she got her Doctorate in curriculum instruction and administration. One of the people she went to classes with was from Michigan City, which gave her a contact in the Michigan City area. After spending eighteen years of her adult life in Indianapolis, she was brought back up north to work with the Michigan City Area Schools.

Today, she serves as Michigan City Area Schools Director of Curriculum. Her duties include making sure that teachers have the tools, the materials and the instructional strategies that they need to in order to meet the needs of their students. In order to do that, Radford writes grants and either offers professional development or arranges for professional development for teachers. She works closely with teachers – especially in the summer time. She is in high-gear in the summer preparing for school in the fall.

"My job is never boring – there is something new about it every day, and it is a job that makes a difference in the lives of children. I work with fabulous people. I spend most of my time working with teachers and administrators and they are great people who do their job well, and I think we do good things for children," Radford said.

Since the introduction of new state standards, Radford has been kept on her toes, making sure students are prepared for the next stages in their lives.

In the past five years, the standards implemented in the curriculum of schools have become far more rigorous and intense.

Michigan City embraces the Common Core, and provides training for teachers about the Common Core. Since the legislature has recently changed the standards to focus more on college and career readiness, the expectations for students have greatly risen. The structures of tests are more complex, and students are expected to read at a higher level in addition to being able to comprehend more complex materials. Part of Radford's job includes getting everyone ready for the changes in the tests, which contain more extensive problems where students must show all of their work.

Being in the district for twenty-one years, she has been a part of several projects. Most recently, one of her biggest accomplishments is a program called Early College, which was implemented at Michigan City High School this school year. It is designed for students who are going to be first-generation college students. This development helps freshmen stay on track throughout their high school career. By the time their graduation rolls around, they have the potential of acquiring between thirty and sixty college credits for free.

Through her work in the schools, Radford has learned things about herself she never thought existed.

"I can dig deeper than I thought was possible, and I have learned to roll with the punches. My job is important and truly makes a change to kids' lives," Radford said.

And while she's changing lives, she still acknowledges those who changed hers.

Educationally, one of her biggest inspirations is Howard Gardner, because of his theory of multiple intelligences. Gardner believes in the idea that people aren't smart in just one way, but they show their intelligence in a variety of ways.

Along with these theorists that drive her toward success, she hopes to inspire her family with the work she has done in the community.

"I think that the work that I've done has shown my kids what it takes to be successful, and that is anything worthwhile takes hard effort. I think as proud as I am of them, I think they are also proud of their mom," Radford said.

Each day, she hopes for new ways to continue to educate students with as much knowledge as possible, and looks forward to the next few stages in her career.