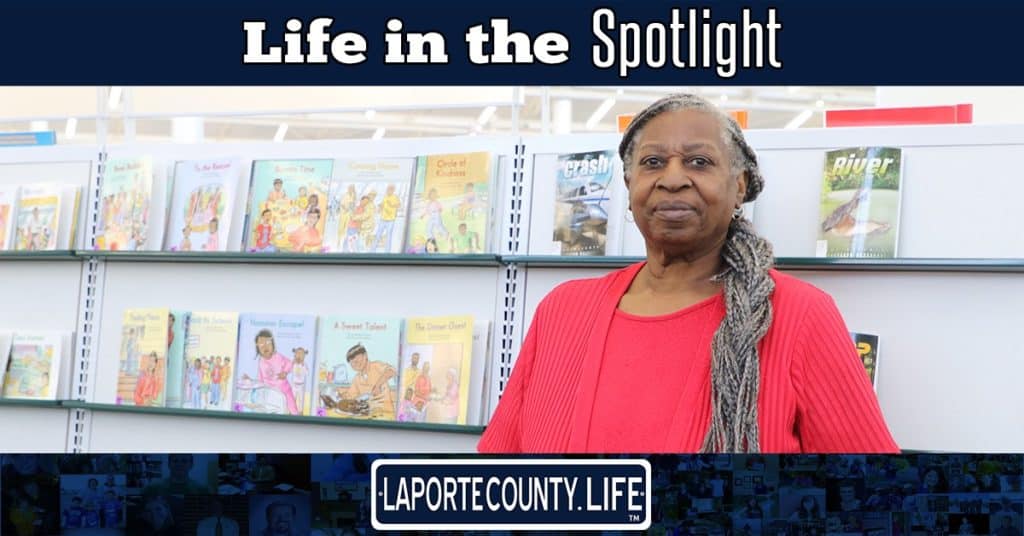 Look for the woman in the red coat. For residents in Michigan City, Faye Moore is well-known for her community involvement, so much so that the coat has become a signature sight.

“I started wearing this red coat and people started noticing me and coming to me for advice and resources,” Moore said. “That encouraged me to help that much more, to help people do better and get better.”

Born in North Carolina, Moore moved with her family to Brooklyn, New York, when she was just 8 years old. Growing up surrounded by her extended family in a classic brownstone, Moore learned the value of caring for others from her mother and continues to live that example.

“I think I’ve always tried to help people because my Mom would care for family members that would move from North Carolina to New York,” Moore said.

When Moore was 25, she headed to Indiana.

“I was tired of New York. I was raised in that country atmosphere, and city life was just so fast,” she said. “I wanted to meet a young man, get married, and raise a family but not in New York, so I moved to Anderson with my cousin.”

She took a position in the local sheriff’s office, where she began to learn more about the workings of the criminal justice system.

“I started learning and trying to help out in the community to prevent crime. My church started to go into the community to try to get people out of the environment they were in and help them learn how to be law-abiding citizens,” she said.

Moore then moved to Northwest Indiana and settled in Gary where she began looking for work. She took a position in the Humanities Department at the University of Chicago but when a secretarial job in the Indiana Department of Corrections (DOC) opened up in Michigan City, she took it.

Looking to further her career, Moore took on a role as a correctional officer. At that time, women couldn’t be promoted as easily as men. To be promoted in the correctional system then, you had to work directly with the inmates “behind the wall,” where women were not allowed at the time. Moore wouldn’t settle for just remaining a Correctional Officer, so she transferred to the Women’s Prison in Indianapolis, where she would have more opportunities for promotion.

Moore eventually retired with 29 years of service. Throughout her tenure, she was continually learning and fighting for those who needed help. One of the biggest changes she helped to make was in visitation practices. Being a family-oriented person herself, she also fought to reform visitation in the state prisons. At the time, immediate family were the only visitors allowed in the prison. Moore worked to include extended family such as cousins, aunts, and uncles as some inmates either didn’t have immediate family or were not in contact with them.

“They started letting the inmate pick who they wanted to put on their visiting list. They found that more people were coming to visit and some inmates who had never had visits now had visitors,” Moore said.

During a brief pause in working in the prisons, Moore found herself moving back to Michigan City to care for her mother. While working at Lighthouse Place, Moore met her husband, Eddie. They married and between his swing-shift work and not having children of her own to care for, she found she had time on her hands.

It was Moore’s neighbor, Hazel Thomas, who encouraged her to use her free time to get active in her neighborhood through their Eastport Improvement Association.

“Hazel became my mentor and she started encouraging me to get involved in the community,” Moore said. “She also encouraged me to get on the North Center Community Action Agency Board (NCCA). From then on, I started with the boards. I was on the NCCA board, I started on the Red Cross board, it seemed like every time I turned around someone was asking me to be on their board or on a commission.”

Over the years, Moore’s community involvement has grown exponentially. She sits on the board for the Sustainability Committee, NCCA, Meals on Wheels (she’s also a volunteer driver), and the Michigan City Women’s Commission. She also volunteers with many community groups such as the League of Women Voters, the Indiana Juvenile Detention Alternatives Initiative, and is a lifetime member of the NAACP. Being part of so many organizations is her way of caring for others.

“I enjoy knowing that I’m helping people in the community have a better quality of life,” Moore said.  “A lot of times people don’t know about the services that are available to them, so by volunteering I find out a lot of information and share that with others. It’s a networking resource to know your community and the people that live there.”

Throughout the years, Moore has also been a strong advocate for her local African-American community. Whether it is working with her local NAACP or helping with Black History Month events, her work has even earned her several awards.

“I’ve always been active in the church. I think that’s where it all started. I’ve always just tried to treat others like I would want to be treated,” she said.

“I don’t have any free time. I sleep, I eat, and go grocery shopping. That’s my free time. I’m just always busy doing something!” Moore said.  “Being so active in the community keeps me going. When you help somebody and you see them later on and they remember you and thank you for helping them, that’s all I need, just knowing that one person was helped.”

The amount of individuals Moore has helped through her stellar community service is unimaginable. Her humility and grace in caring for others is certainly worth spotlighting. So next time you’re out in Michigan City, look for the woman in a red coat. She’s willing to help.