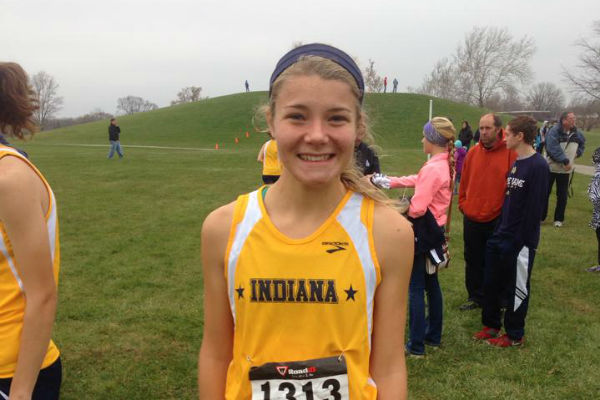 Every time I speak with Elena Lancioni I walk away with a smile on my face. She is such a pleasant young lady who is very giving of her time and always very upbeat. At age 18 she has been running more than 10 years!

When asked who it was who got her started running, she said it was her dad. He dragged her out to a 5k when she was in second grade! She believes she won her first award when she was in 6th grade; winning her age group in the Sunflower 5k, in La Porte. She’s won her age group many times since!

Her middle school cross country career started out kind of rocky. She said her mom told her at the end of that first year that maybe cross country wasn’t the sport for her! Imagine that… but she hung in there and did better in seventh grade and started to really enjoy it in eighth grade. 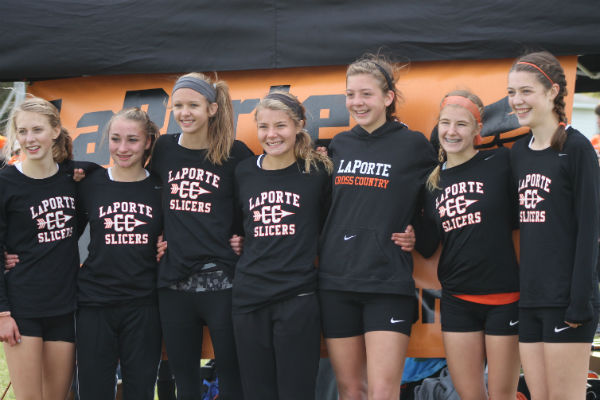 Coming in third at the State Meet this year in Terre Haute and being able to run with her team (who placed 10th in the State) was her biggest accomplishment. Earlier in the season she had remarked that she had been looking forward to running with a team in Terre Haute and not as an individual. She runs between 45-50 miles a week and started getting serious in High School adding more winter running into her training program.

Her favorite race outside of the regular Cross Country Circuit is the Footlocker.

“I like the course and it’s later in the season. It’s cooler in November and nice to have that race as the last race of the season,” Lancioni said.

Her choice for college is Bowling Green University, where she will major in Exercise Science. Her reasons for choosing Bowling Green were simply because she felt happiest there. It was a good fit with the girls and the team and felt she could make a difference there. 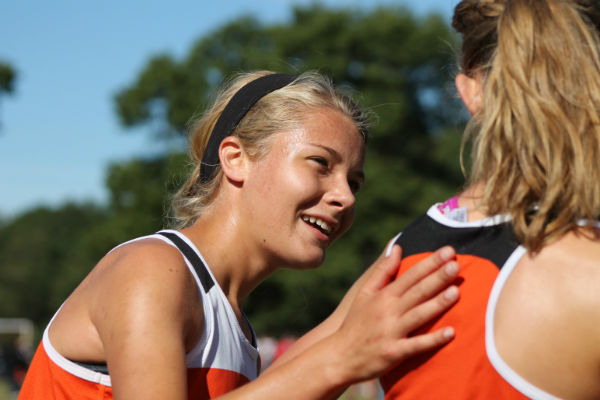 One of the things she treasures the most are the friends she has met at the different races over the years. She has gotten many phone numbers and still keeps in touch with many of her peers throughout her career. Elena collected a few more this weekend as she represented Indiana in the Mideast Cross Country meet. The top senior runners from Indiana, Michigan, Ohio and Illinois competed in Ohio where Elena placed 5th overall to lead the Indiana girls to grab the first place honors.

“She ran at Stanford and I remember watching her run in the Olympic Trials. Her journal is very insightful and she is very motivational,” Lancioni said.

As for school, her favorite subject is Spanish and particularly enjoys her yearbook teacher Ms. Parker.

“Ms Parker is very enthusiastic and encouraging not just to her own students but to everyone,” Lancioni said. “She is a good friend to everyone and likes to make a difference. She started a Kindness Campaign in the school and everyone is joining to make the school better. She supports the students and has even come to a few of my meets.”

In her spare time Elena likes anything having to do with the outdoors. She also likes to bake. The Lancioni family sponsored a foreign exchange student giving both Elena and her sister Lauren (who is 15) some great memories from a great experience. She likes to volunteer when she can. She ran with Girls on the Run a couple weeks ago, but most practices are the same times as mine so I didn’t get to do as much as I would have liked. She has a dog named Rocky and a cat named Bullwinkle.

When asked what people wouldn’t know about her, she replied, “That I write in cursive all the time, most people print a lot more but I always do cursive.”

When asked what she would like people to know about her, she replied, “That I’m a friendly person. That I am always willing to be someones friend.”

I guess that about sums it up for why Elena Lancioni is a Life in the Spotlight.