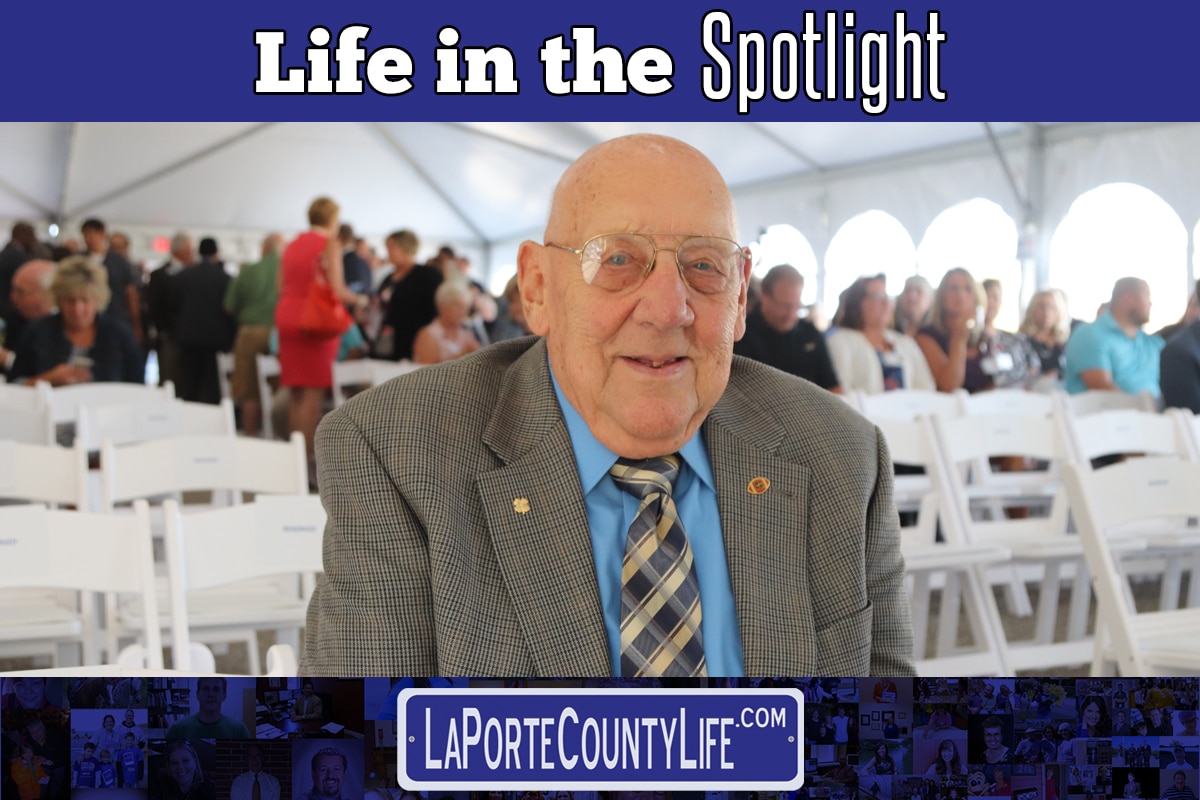 If you live in the La Porte County area, you likely have run into Ed Gondeck at least once. He grew up in Michigan City and went to St. Mary’s High School (now Marquette Catholic High School). After graduating, Gondeck worked at Joy Manufacturing Company, then finished out his working life on the Toll Road, and retired when he turned 65.

He met his current wife, Lillian (Lil), in La Porte.

“I was on the La Porte County Council for 14 years, and Lil worked in the courthouse. 29 years ago I moved to La Porte with Lil, when we got married.”

Gondeck, who turns 88 this summer, has spent a majority of his life simply giving back. His first taste of volunteerism was as assistant Scoutmaster for the Michigan City Boy Scouts, leading his own son. However, after Gondeck retired he couldn’t resist becoming a helping hand in the La Porte County area and beyond.

He’s serving his 20th year on the La Porte City Fire Department Merit Board where he runs regular tests to promote and hire loyal firemen. For the last 24 years, he’s ushered at the Notre Dame Football stadium, where he catches a game every once in a while. And, he is in his 29th year as a leader of the sheep committee on the 4-H extension.

“Since I’ve moved to La Porte I have been active in the Fraternal Order of Eagles, and involved in the auxiliary at the La Porte Hospital,” Gondeck said.

He was one of the honorary golden-shovel groundbreakers last August for the New La Porte Hospital that will open in 2020.

These days, Gondeck spends most of his time at the hospital, greeting people, assisting with discharging patients, gift shop maintenance, and organizing fundraisers that benefit young professionals.

“It all started when I had a knee replacement surgery at La Porte Hospital. They treated me so good up there,” Gondeck said. “When I got discharged, I was interested in volunteering, so I filled out an application.”

Soon enough, the auxiliary board urged Gondeck to become a more focal part of the team. He served as vice president, then moved up as president for a six year term.

“The auxiliary hosts two fundraisers each year and raises money to support healthcare scholarships,” Gondeck said. “Last year we gave out 18 scholarships to students in La Porte County who are going into the medical field, like nurses and lab technicians.”

Gondeck sees giving back as a part of life and gives thanks for the people who have given back to him during his time of need.

Gondeck encourages younger generations to become a more focal part of volunteerism in our world today.

“I go in to the hospital later today, and I’ll keep doing this as long as I can,” he said.