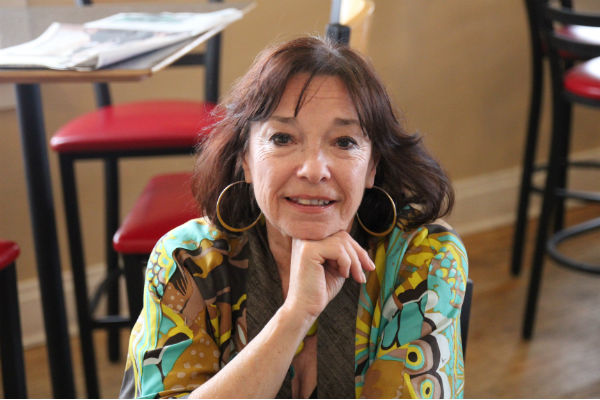 I sat in at a small table inside David's Delicatessen in New Buffalo, Michigan. Across from me was a unique and lovely individual. Her hair was dark, her smile was bright, and she wore a most excellent pair of very high-heeled sandals. Ladies and gentlemen, meet Dani Lane. She is in the limelight as this week’s A La Porte County Life in the Spotlight.

Lane was born in Los Angeles and raised in Old Town, which is a neighborhood in Chicago. She attended an inner city school then went on to the Art Institute of Chicago, where she gained background in costume and dress design. By trade, Lane is a freelance graphic designer. Her first love, though, is acting.

“The other thing I’m part of, which is also in Michigan City and certainly part of La Porte County is the The Dunes Arts Foundation or the Dunes Summer Theater. And I’ve been involved with that for maybe twelve going on thirteen years. And I’ve been on the board off the board, but always working in some capacity with the theater,” Lane said.

Lane used to work for a graphic design company in Chicago. The man that owned the company bought another place in Union, Michigan in the 1970s and the entire studio would come over and hang out in his swimming pool or on his tennis courts. This is where Lane met her husband, Jack Lane. In 1987, she and  Jack moved to New Buffalo, Michigan where they have lived ever since. Lane became involved with the Lubeznik Center for the Arts in Michigan City through a friend. The Lubeznik Center is not only an art museum, it provides opportunities for individuals the opportunity to become an art advocate experience all types of art whether it’s through classes, volunteering, performing arts, or exhibits.

“I was asked to participate with special events there,” Lane said. “I found that the Lubeznik Center was just really a fantastic organisation with the potential to grow into a really major art force in the region.”

Lane is the President of the Board of Directors for the Lubeznik Center. She is also involved with a Women’s Advocacy Group in Michigan City that just started. The group will be having its first special event on September 14 at the Dunes Summer Theater, and the the Advocacy Group’s committee will be introduced. She is also involved in an initiative called Artspace. Artspace is known nationwide and is a non-profit organization that helps to provide affordable space for artists and art organizations to live, work and thrive in the community. They were contacted by the Lubeznik Center to come and check out Michigan City to see if there were any candidates for a site. The Warren Building located on Franklin Street in the Uptown Arts District in Michigan City was selected to be the official Artspace site in June 2011.

“Art is good for the economy. It’s good for education. Children who participate in the arts tend to do better in every single field,” Lane said. “Art just in general has a very positive effect. it empowers children.”

Truer words were never spoken. Are there any pearls of wisdom that you would like to pass on to readers?

“I don’t ever want to hear somebody say they’re bored because there’s just so much to do or to get out there and learn,” Lane stated.

This writer couldn’t agree more, and couldn’t be happier that she met such a lovely lady. I hope, readers, that you all continue to learn and teach and be as unique as Dani Lane because she is a La Porte County Life in the Spotlight.

To find out more about the Lubeznik Center for the Arts click here!

Want to know what’s happening at the theaters in your area? Click here!