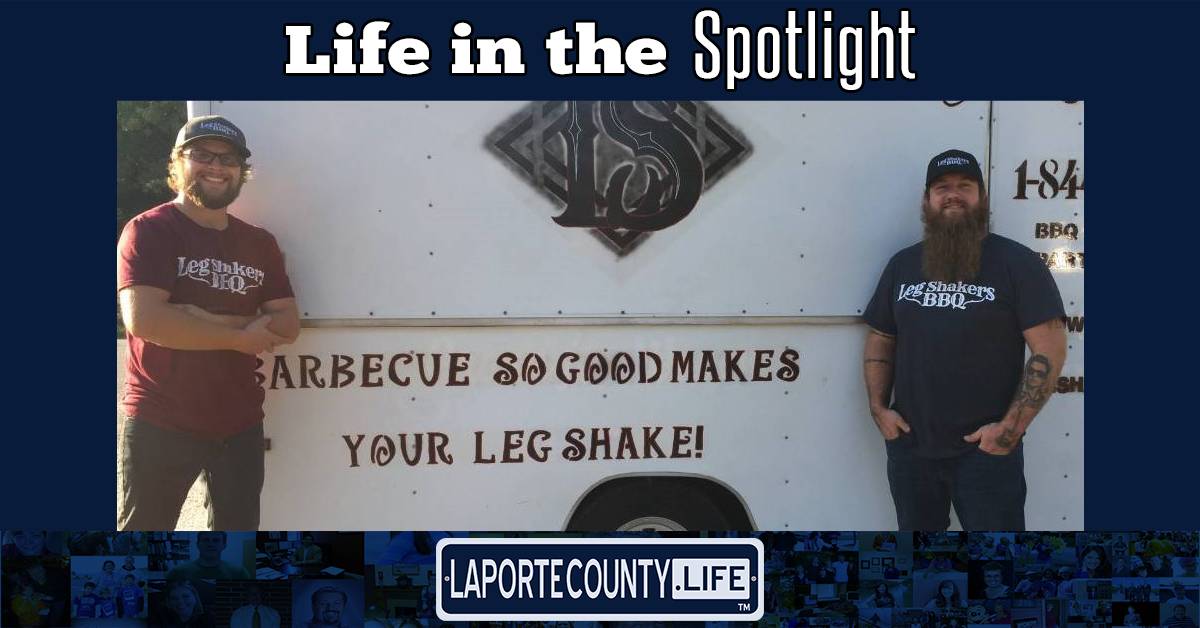 Brothers, business owners, and musicians Dan and Jon Egolf of San Pierre are putting spice into the community. Owners of Leg Shakers BBQ—“barbecue so good, it’ll make your leg shake”—the Egolf brothers are using their talents to put some tastiness into their community.

Born and raised in San Pierre, the two have been a singular unit for as long as they can remember.

“We’re a package deal. You get one brother, you get the other brother,” Dan said.

The brothers followed a similar career path, taking jobs in a local factory. Jon operated a brake press while Dan worked a band saw. It was at this factory and other positions, including working with Swan trucks, that the duo picked up skills that would eventually help them start their own barbecue food truck business.

The Egolf brothers began their passion for barbecuing several years ago. One of their friends made his own jerk chicken, inspiring the pair to create their own recipes. They took the time to develop a tasty BBQ sauce and rub seasonings, and they perfected their grilling. People enjoyed their BBQ so much, they decided to start their own food truck business.

“I never thought it would turn into something like this. It was just one of my favorite side hobbies. The more I made it, the more people wanted it,” Jon said. “It finally got to a point where I wanted to get it out to everybody.”

They’ve been serving the Starke County community with their delicious food, and the brothers hope to expand to the surrounding communities next year. They plan to spend the winter preparing to propel their business into new territories. They know people will want barbecue food, despite the winter cold.

By this point, you’re probably wondering how it would be to work with your brother. For the Egolf brothers, it’s just second nature.

“It goes so well sometimes because we don’t have to talk to each other, we just know what to do and get it done,” Dan said. “It’s been like that for years. He’s my best friend. I get to work with my best friend.”

When the brothers aren’t working on their BBQ business, they enjoy fishing, canoeing, and primitive camping. They’ve taken several trips to Minnesota and enjoy the quiet and peace they have found there. It’s a chance to disconnect from the world and reconnect with themselves.

“The peace of being outdoors is refreshing,” Dan said. “There are no cars, no technology, you get back with yourself and when you get back to ‘reality,’ you get a good perspective on your life and what you have.”

The brothers also enjoy using their musical talents to play in their church band. Both versatile musicians, Jon plays guitar and mandolin while Dan plays bass, drums, and ukulele. They said playing is a great opportunity for them to give back to their church family.

“Our church is very supportive, and we’ve had a lot of friends there that have helped us out. Our music is a blessing that we love to pass on to them,” Jon said.

The pair have found that there is a way to blend both their music and their love of barbecue. They recently started DJing as well as catering, blending tunes, and food into one delicious barbecue experience.

“Barbecue and music go together,” Jon said. “We have all the equipment from our band days, so we’re getting ready to promote the DJ side [of the business]. It can be the ultimate barbecue party.”

What once began as a hobby has turned into a passion and a growing business, and the Egolf brothers are grateful for this new opportunity.

“We’re grateful and thankful that we’re our own bosses. With our previous positions, we were caught inside four walls, but now we can be outside and enjoy what we do,” Dan said.

To find out just what makes their BBQ so delicious, or to request their catering services, visit their website: https://www.legshakersbbq.com/.