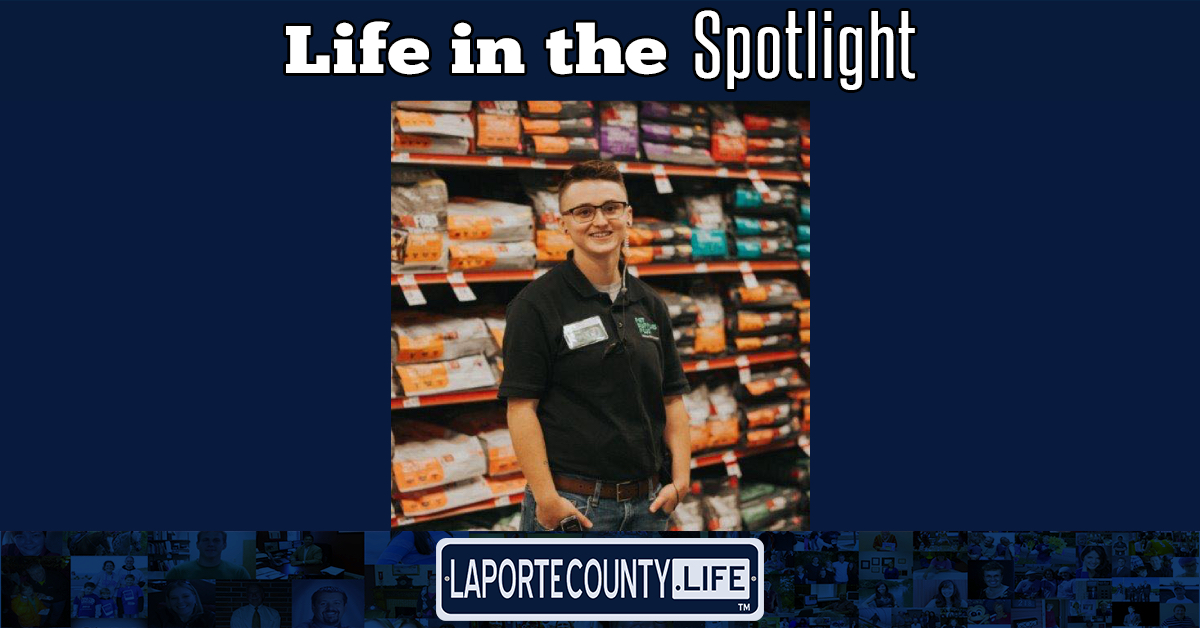 A mini horse, some ducks, and a tiny goat in a camouflage puffy vest walk into a store…

Nope, not a joke.

As store team lead at Pet Supplies Plus in La Porte, Cameron Croyle has seen lots of interesting pets accompany their humans into the store. The most exotic were two tiny monkeys, and while the critters can definitely pull your thoughts from one place to another really fast, Croyle wouldn’t have it any other way.

“It can get super distracting in here sometimes. You have a lot to do and it’s always the day 200 puppies come in. But to be honest, it’s hard to have a bad day here,” Croyle said.

The job combines a lot of what the North Judson native loves: community and animals.

“Every small-town vibe you could ever imagine is in North Judson. Everyone knows everyone, and there are good community vibes going on there, and I feel like having grown up there helps me with my outlook here.”Croyle said. "I like to bring that sense of community back to my employees and customers."

Croyle moved to La Porte at age 15 and entered the workforce after high school. Retail is where Croyle feels most comfortable.

“I started at the outlet mall in Michigan City. I worked at Adidas and The North Face. That’s when I started to learn and love the community of it,” Croyle said. “At North Face, for example, we had to do 20 hours of community work every quarter. That’s where I learned that you can kind of correlate giving back to the community with your career.”

Croyle has been able to bring that philosophy to the job at Pet Supplies Plus and the La Porte community.

Reptile day is a favorite, but so are the other pet and product demos they do out in the community.

At 23, Cryole is wise beyond age when it comes to understanding the value of customer and community relationships.

“Managing a store – it’s tricky and can be a lot, but fortunately, I feel like I was cut out for the position,” Croyle said. “With in-store retail, you’re battling online stores. So how do we turn that into the right business culture? It’s by giving every person who walks in the door your time. I want to treat every customer who walks in the door like they are number one in my world. It’s about creating that family-type community.”

It seems to be working. Croyle said the store has quite a few regulars and having the pet washing stations helps, too.

“Customers come in and can have that sense of community with each other, too,” Croyle said.

Croyle didn’t really have pets growing up but has a house full of furry friends and humans now. Croyle and fiancé Elissa Wright live in La Porte with Elissa’s three daughters (ages 14, 9, and 6), two beagle pointers mixes (Homer and Marge), a Russian tortoise (Igor), Barry the Hamster (who eats so much he kind of looks like a Guinea pig) a fish tank, an unexpected pet mouse, and Frank the outdoor cat.

Homer and Marge came from an adoption event at the store, in fact.

“We were just moving into a new house, and my fiancé was like, ‘You can get a dog in a few months once we settle in,’ but in my head, I heard, ‘Get all the dogs right now.’ A week later, there we were with Home and Marge,” Croyle laughed.

Croyle shouts out Wright, and the store’s owner when it comes to loving the job.

“Elissa is the hardest working person I know, and with three daughters and the pets – life can be very full. But it keeps us on our toes and brings the best out of both of us. I feel like we’re on the same page, wanting to make sure that everything we do brings good things back to the community,” Croyle said.

“I never thought of staying in the retail world but the kind of culture that he has created here – I feel like I can retire here.”