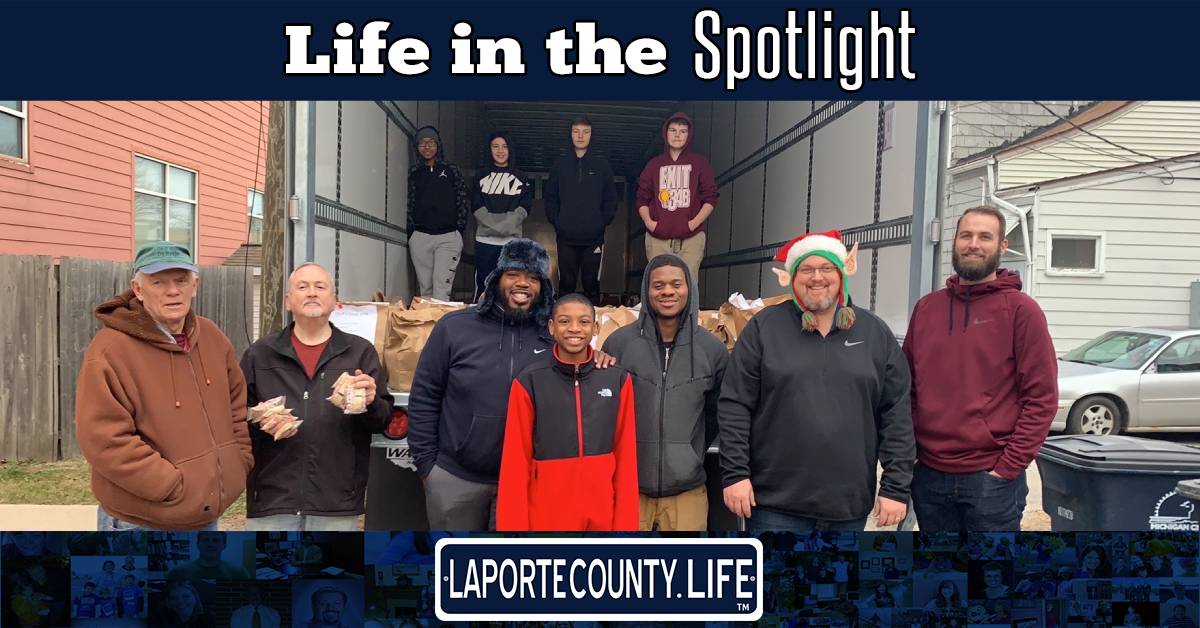 Williams is pictured in the middle left wearing the fur hat. This photo was taken during his basketball team's salvation army service project mentioned in the article.

Over the 10 years of serving as a coach, mentor, and educator, working with children has taught Brandon Williams a lot – about his community, and about himself.

“I just have a heart for service,” he said. “It started when I was studying at Indiana University.”

Born in Gary and raised in Michigan City, Williams graduated from high school there before attending Indiana University Bloomington for telecommunications. The degree was important, but his experience there included a long list of community service and leadership roles: president of his fraternity, dorm president of his residence hall, and member of the Indiana University National Pan-Hellenic Council, and advocate for community engagement at the Shalom Center, one of Bloomington’s largest daytime homeless shelters.

“All of these experiences made me want to serve, learn, and give back even more,” Williams said. “I’m not concerned with attention because there have been things I’ve been a part of and helped with in the community, that papers wrote about, but I wasn’t given any credit. I’m honestly not moved by recognition, it’s about helping people get better.”

“I serve kids who may have had some difficulty in class,” he said. “I help them get refocused and back on track for having a successful school day.”

He’s also been a basketball coach for over 10 years, and heads the 8th-grade boys’ basketball team at Barker Middle School, is an instructor for the Michigan City Basketball League, and owner/operator of Simple Leads to Spectacular Basketball Training.

“It’s important that we serve and educate those that are coming under us, and to be honest, our city could do a better job of offering clear and concrete things for our youth to do,” he said. “Our Barker boys’ basketball team helped unload two tractor-trailers around thanksgiving for the Salvation Army. I try to impress on my players that it’s not just about playing a sport, but having your heart and mind in the right place as well.”

It was important for him to come back to his hometown and make what difference he could.

“I had opportunities to go other places, and that’s not to say I won’t explore some options in the coming years, but it was important to come back home to serve and give back,” he said. “I spoke with the late Becky Williams, founder of the Hope Program, and she pressed upon me the importance of teaching, leading, and serving.”

“We have some amazing children in this community, with a variety of different abilities,” Williams said. “Academically, musically, artistically, we have to keep encouraging them to be better, and to love and uplift one another.”

Williams strives to serve as a role model for the kids in his community, and help them learn through his story.

“I deal with people from all walks of life via school, church, basketball, and so on, so it’s important for me to serve with love and understanding,” he said. “It’s important because as a black man, statistics say that I should be dead, in prison, or just in the system. I’m one of the ones that beat the odds. No, I’m not perfect by any means, but I feel like I show other young men that I speak openly and candidly with them about myself when I cross paths with students in school or in the community.”

One of William’s own role models was right at home, his mother.

“She influenced me the most because of how hard she worked and watching her sacrifice so much for me growing up,” he said. “She did the best that she could as a single mother, and was and still is amazing. I wouldn’t be where I am today without her unconditional love and support. The older I get, the more I appreciate her.”

Other than his mother, he cites many role models and educators who helped him make it to where he is now, and paved the path for where he is going.

“I’ve gotten to where I am today through faith and continued hard work, but I’m nowhere near where I want to be and where I’m going to be,” he said. “Still, through God allowing people to enter my life that have shared their knowledge and wisdom with me, I’ve been able to walk through some doors that once seemed impossible to open.”