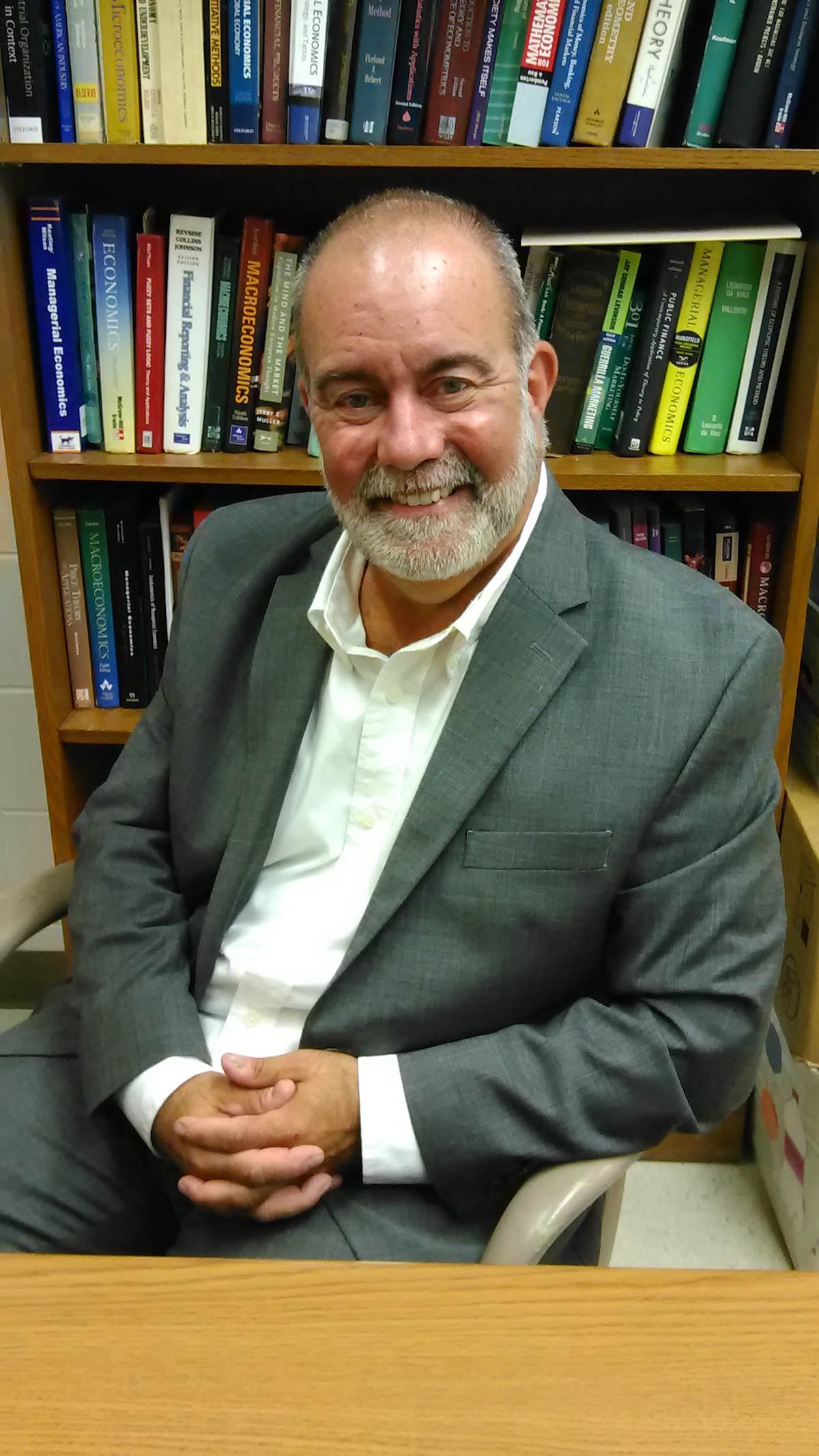 Professor Anthony Sindone tells his students that economics is personal. For a man whose life is a pattern of research and demonstration of the way people in our region spend our money, Tony’s words cannot be more true.

“Everything connects,” he said, “But your individual decisions on what you do and how you relate to other people in that way is the economic actor. It is you as an individual. As an individual you are just but a piece of all the interaction.”

When you shop for groceries or pay your bills there is a person involved at every step of the way. It is important that we all understand how that works. Anthony recommends that even students not majoring in Economics or Business take his course so that they may have a better grasp on what it takes to make their world work.

Anthony once had no intention of teaching at the college level. He joined the Air Force after high school, and was able to continue his education while enlisted. His first choice for a degree was Engineering.

An undergraduate degree came slowly. Tony took classes part time, both on the military bases where he was stationed and at the community colleges near them. He finished at the California State University in San Bernardino.

Tony switched to a Business Management degree because he did not like the math involved with Engineering. Ironic, since it was a class about numbers that made him switch his major again. Something about the economics course he was taking struck his interest.

It took him another 8 years after leaving the military to earn his graduate degree at Notre Dame University in South Bend. Tony and his wife Marcia moved to La Porte during that time to give their kids a better life. He continued to work while attending school part time.

“I identify very closely with the students we have here [at Purdue Northwest]. I had to work my way through college. Nobody paid my way.”

Tony liked to create his own jobs, like when he started a real estate business that flipped houses for profit. Entrepreneurship was something he was passionate about and thought he would continue to pursue after graduation. To some extent, he did.

Teaching a class at Notre Dame, though, changed the course of his life.

Tony accepted a request to teach made by the school. He fell in love with the material and seeing the response he got from his students.

Thus, 1987 was the beginning of his teaching career. He’s accrued 29 years of experience at Notre Dame, Indiana University of South Bend, Mendoza College of Business, and, most recently, Purdue University Northwest.

“What I like about the entire Purdue Northwest campus, now that we’re unified, is the fact that we are really student focused. I’m really about the students, I want to see people succeed. Here, from the chancellor to the staff, we are all about the students.”

Tony does not restrict his teaching to the college campus but instead stays involved with the business community of the region. He is preparing for his third summit through the Regional Council of Economic Advisors. Tony will also be giving an Economic briefing in the fall to the La Porte County Chamber of Commerce, something he does twice a year.

The Regional Council of Economic Advisors was founded by a group of professors, including Tony, from PNW, Indiana University, and Valparaiso University, as well as some other industry leaders. They gather and analyze data such as employment rates, income fluctuations, and top employment industries. This information can then be shared with the community at a moment’s notice or, as in the case of the Chamber, as a diagnostic speech.

“[Collaboration] is tremendously valuable. Nobody has a monopoly on good ideas. So when we collaborate with our colleagues even outside of our own specific fields, I think it is one of those cliches where the whole is greater than the sum of its parts. What comes out of collaboration between 2 or even more is a better idea (it is more rigorously researched) that on your own you may not have come up with.”

Tony even collaborates at home. He and his wife Marcia wrote a book together called “Raise the Blue.” It is a guide to being a foster parent based on their own experiences. For ten years the took in struggling children and sick babies, determined to help the kids in good times and in bad. They adopted their last child, Jonathan, after his biological parents’ rights were terminated.

Together, Tony and Marcia have four children and seven grandchildren. All are fulfilling his wish to see them thrive.

Tony’s goal for himself is to keep doing what he is doing: exploring the world around him with his wife, and teaching his Economics students how it all fits together.