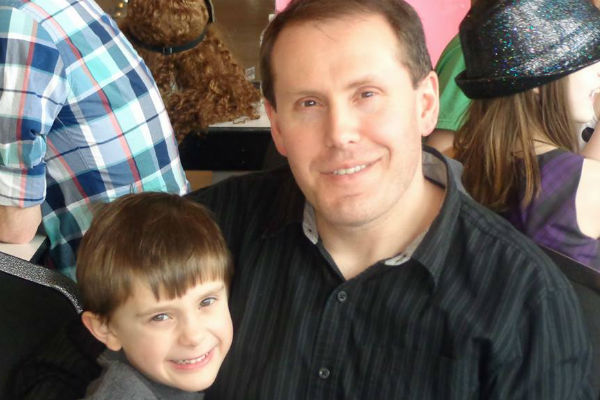 Andrew Tallackson- survivor, writer, producer, pianist, editor, and most importantly father. He wears many hats; each one with skill and finesse. Tallackson can serve as inspiration to us all as he handles any hardship with an inextinguishable spirit. In the early minutes of my first encounter with Tallackson, I realized that this is a man that forges powerful connections wherever he goes. I was eager to learn the past, present, and future behind this man, and I was not disappointed by his story.

“I am exceptionally happy and blessed,” seems to be the common theme in his life.

Born in Chicago, he grew up in the Miller Beach section of Gary; however, he technically grew up in Michigan City considering his family’s frequent visits.

“I always wanted to work and live here. I knew that from a young age,” Tallackson reminisced.

He attended Nobel Elementary School and then attended the Emerson School for Visual and Performing Arts for middle and high school. He double majored in Journalism and Film at Indiana University-a major he actually has ended up using in his career. Out of school, he began working for the Peru Tribune for five years as a reporter, news editor, and managing editor. It was there that he met his wife Alice.

“The Michigan City paper was a sister of the Peru paper, and they needed an entertainment editor which is what I have always wanted to do. So when that job opened in 97’, I came to the News-Dispatch, and we moved to Michigan City where I worked for 15 years.”

It was a risk moving from Peru to Michigan City. Tallackson’s wife had tenure as a teacher and no familiarity with the area. Uprooting to the area was a dramatic leap of faith, but it was the right one.

“We have the best friends that we have ever had. We have an incredible supportive church that we attend. We both have jobs that we went to college for. Through great medical care I am still here. We thought we would never have children, and we have an amazing seven-year-old son. I feel that La Porte County was meant to be. We are supposed to be here,” he explained.

It was here that Tallackson got to dig into the subject he loves most- the art scene. He did movie reviews, play reviews, and even got to meet Tom Hanks and Daniel Craig at the Road to Perdition press junket. Then came one of those unexpected challenges that would ultimately change the course of Tallackson’s life. He was diagnosed with Crohn’s disease and in 2002 the disease nearly took his life while sitting in Swingbelly’s.

“The disease had basically zeroed in for the kill, and I was in the hospital eight times and had to leave the News-Dispatch. I had two surgeries last year that basically corrected the problem,” he explained.

Tallackson believed the disease would prevent him from ever working again. So in January of 2013 he began freelancing for The Beacher to bring in some type of income. In May he received a call from the paper requesting that he take over as editor. He gratefully accepted the position all the while taking on another huge project- co-producing the John Hancock film Swan Song that is set to come out this summer. He tackled that project as well as a hernia surgery on top of training for editor in a blur of busy months.

“I could not believe it. It was just a tremendous blessing. I went from sitting there thinking that I would never work again, at 42 my life had come to a crashing halt. To the next year, being offered job as en editor at a weekly newspaper and co-producing a movie. It is just wild,” he expressed.

Tallackson has enjoyed the career switch from typical news to the non-traditionalist Beacher. It covers positive elements tied together with a real estate focus. His staff as well as his advertisers are some of the best people around and create a constant upbeat environment. But as his love for the job all falls back on his love for journalism.

Journalism is an important component to Tallackson’s life, but it would be impossible to paint his whole picture without mentioning his son Will. This precocious seven-year-old has changed Tallackson’s perspective on life and he has gained a cult following on Facebook for his humorous antics. At the mention of his son’s name, Tallackson lights up.

“Every parent thinks their kid is bright. This kid is exceptionally bright, in a way that he can sometimes be too smart for his own good. This is a kid who wants to be President. He knows all the presidents, vice presidents, first ladies, and their terms. He is very funny and sweet,” Tallackson explains.

He along with his wife knew that Will would be their only child, and they have made it count. Will possesses an extremely selfless heart at such a young age. For his seventh birthday Will chose having a large party where each guests brought a gift to be donated over a small party with personal gifts. Each of his guests brought a stuffed animal to be given to Franciscan St. Anthony Health: Michigan City where Will once had his tonsils out. Will gave bags of stuffed animals to the hospital, and just this month, the hospital contacted the family for a press release.

“I think Will learned that it is better to give than receive. It is more meaningful to be with your friends and family than to have a million presents. He never once asked about getting his own presents or keeping the stuffed animals. He got it,” Tallackson said.

Tallackson and his wife have a simple philosophy when it comes to raising Will that appears to be working.

“We do not care what he does with his life, we just want him to be a good kid. We just try to instill that over and over again,” he muses.

In his spare time, Tallackson is a talented pianist and a member of his worship team at La Porte First Church of God. He even got to play piano scores in his movie Swan Song. Additionally, Tallackson formed the Young People’s Theatre Group that puts on a performance each summer to unite children in the area.

For his future, Tallackson will be putting pen to paper. He will be writing the book version of his film Swan Song, and eventually finishing his book about his son Will.

“But mostly, I just want to grow old, and I want to watch Will grow old. I think last year put everything into perspective. I am content with where I am now and where I am headed,” he closed.