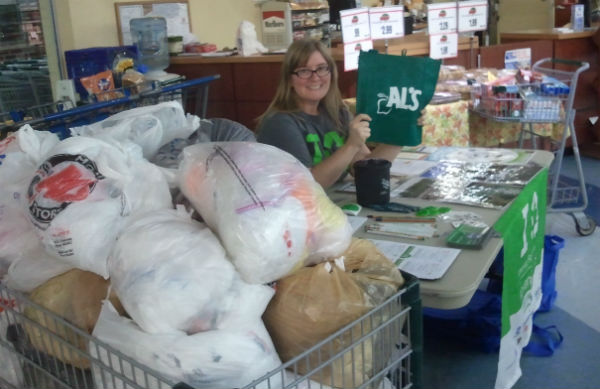 Recycling has always been something Alicia Ebaugh, education coordinator for the La Porte County Solid Waste District, has been passionate about. But spreading the word about it’s importance was never something she thought she could make a career of.

“I always wanted to be a newspaper reporter,” said Ebaugh, a native of Sioux City, Iowa and current La Porte County resident. “That was my dream job.”

And after receiving a bachelors degree in journalism and communications from Iowa State University, Ebaugh had indeed become a reporter - working for a pair of newspapers in Iowa before moving to Michigan City in 2009 to continue her career as a reporter with The News-Dispatch.

“I came here because it (Michigan City) was close to Chicago and I thought it would be easier for me to eventually find a job there,” she said.

But shortly after relocating to Northwest Indiana, she visited the Lake Michigan shoreline.

“I went over to the lake and I loved it, at that point I knew I never wanted to leave,” she said.

In 2011, after six years in the newspaper world, Ebaugh was named the education coordinator of the La Porte County Solid Waste District. She calls the job “a perfect fit” for her.

“I’ve always been passionate about recycling and the environment,” she said. “Those are two causes I have been committed to since I was a kid.”

“I also love teaching kids,” she added. “It’s important to know at a young age that we cannot keep wasting land to put garbage in.”

She says she is “blessed” to be at the Solid Waste District, calling it an opportunity she never thought she would have.

Part of her outreach duties with the District is to visit schools. Much of this comes during April, when Earth Day is a focus at many of the local elementary and middle schools. She is in the midst of coming up with more ideas to engage high school students as well.

“Most of the impact I make from this job comes from personal interactions,” she said. 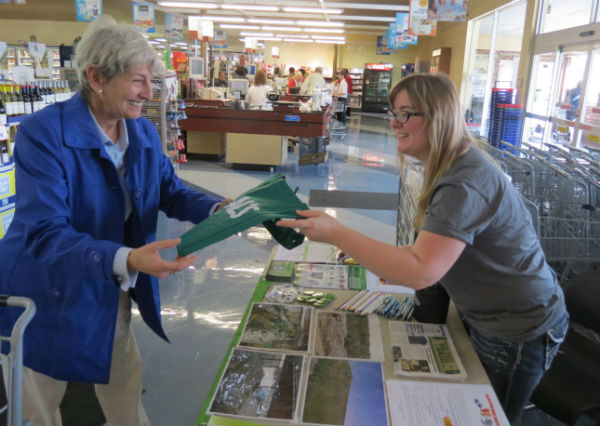 Other “personal interactions” include reinforcing the importance of recycling and the environment at special events. The Solid Waste District’s involvement with America Recycles Day (November 15) has increased significantly over the last two years, when Ebaugh has organized a four-day event where customers at Al’s Supermarket locations in La Porte County are encouraged to bring in plastic bags from home and trade them in for a reusable bag.

On the first day of this year’s trade-off, Ebaugh was able to collect 651 plastic bags at an Al’s location in La Porte. She said that number was more than double the number of bags collected all of last year.

“You can tell people are really taking a liking to this,” she said. “It is so cool to see people learn about plastics and reuse."

In addition to giving away a reusable bag, Ebaugh will talk with every customer about recycling and the county’s procedures behind it. Other tidbits of information also leave the Al's customers interested in learning more.

For example, Ebaugh told one woman at an Al’s location in Michigan City on November 7 that the average person creates about 4 ½ pounds of waste a day, which adds up when you look at it on a yearly basis.

“If you put something in the trash, that might be easier,” she said. “But when you are recycling, you are being a good steward of the earth.”

The last Recycles Day event in La Porte County this year is scheduled for Thursday, November 14 at the Al’s Supermarket in Michigan City located at 3535 Franklin St.

As a La Porte County government agency, Ebaugh says she would like to focus on spreading the word to people living in the rural areas of the County, the ones who do not have the benefit of a city refuse system.

“Even though they don’t have trash service, it is good for me to educate people that you can put recycled items in bags,” she said.

While Ebaugh’s passion is evident with her ever-growing knowledge of recycling, she manages to find time to serve the community in other ways as well.

A year ago, she was named a court-appointed special advocate for CASA/Harmony House, an organization that assists abused and neglected children by finding volunteers to keep in touch with families and take the children out for fun. Ebaugh has been working with the same child for a year now, and finds just as much gratitude in her volunteer work.

“It’s very rewarding,” she said. “They need you more than you will ever know. Children are the ones who really need a voice, and it’s a blessing to be able to give them that.”

Life in Michigan City also offered Ebaugh a chance to be involved with theatre, something she says she has also been “a lifelong interest” of hers.

After serving as a producer for plays and shows for the Footlight Players theatre group, she began the acting gig she had dreamed of for years this past summer when she played “Golde” in the showing of “Fiddler on the Roof.”

From doing her part in saving the environment to helping children on a one-on-one basis, Alicia Ebaugh is without a doubt a La Porte County Life in the Spotlight.