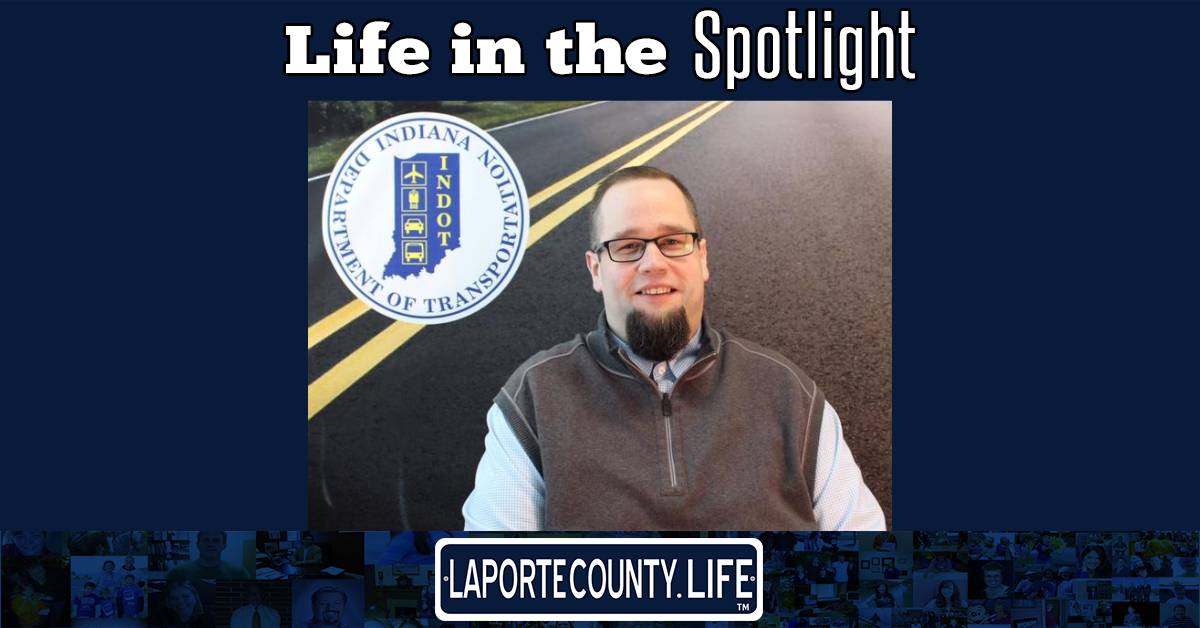 If you follow the Northwest District of the Indiana Department of Transportation (INDOT) on Facebook, chances are you’ve experienced a few hearty laughs from their informative and creatively crafted updates. While INDOT focuses on providing Indiana residents with quality, critical communication, they love to sprinkle their page with a touch of humor when appropriate, particularly when it comes to weather updates. Every clever quip on unseasonal snowstorms or comical take on Mother Nature’s unpredictable Midwest behavior was thought up by none other than Adam Parkhouse, Michigan City native, South Bend resident, and current Director of Communications for INDOT’s Northwest District.

“I started here as Media Relations Director in 2018, where I handled media inquiries and ran our social media,” Parkhouse said. “We have a robust Facebook page with a strong presence that we’re proud of.”

Upon entering this role, Parkhouse was fortunate to have a guiding force in the form of his predecessor, Matt Deitchley.

“Matt is the one that really spearheaded the agency and got these creative posts going. He’s got a great sense of humor that he used when appropriate in an effort to build a solid following on the platform,” Parkhouse said. “When I came on, I was similarly geared, and saw an opportunity to continue to use the page as a creative outlet. We wanted to have fun with it, but do so in a way that helps build up our following so that when we do have important things to say we have more eyes on them.”

This tactic has proven incredibly lucrative, and to date INDOT’s page has more than 85,000 likes.

“Last I checked we were ranked number seven in the country in terms of likes compared to other Department of Transportation pages,” Parkhouse said. “What we do and the way we engage via social media has established a great link with the public. We’ve found it highly effective and it definitely works in our favor.”

Though these humorous posts serve as an entertaining method of communication in the moment, they play a much bigger role in the overall mission of INDOT.

“The posts are certainly a fun way to engage with the public, but ultimately their silliness is a means to a greater end,” Parkhouse said. “The more people follow us for our fun content, the more people will be exposed to critical information in the future, such as road closures, accidents, and safety updates.”

Parkhouse creates posts with unique style and relatable voice, an ability he no doubt enhanced during his 17 years working in the news industry.

“I started my career as a correspondent for The News-Dispatch of Michigan City, and was then brought on as a full-time sportswriter by our then Sports Editor Justin Breen,” Parkhouse said. “Our company then bought the Herald-Argus in La Porte and I became Sports Editor for both papers simultaneously.”

During his years in news, Parkhouse found strong professional influences in the form of Breen and Managing Editor Dave Hawk.

“Dave had been in news a long time and had decades of wisdom to pass down,” Parkhouse said. “He was kind of the grizzled veteran whereas Breen had entered the industry more recently. Having those two was like having a good mix of the old and the new and shaped a lot of the way I would eventually tackle the job moving forward.”

“That’s kind of how I see myself as well, someone in the middle ground that likes to strike a balance between things as much as I can,” Parkhouse continued. “I like to understand all sides of an issue and see where folks are coming from.”

Parkhouse began shaping his career in high school, when he identified his talent for writing and aimed to combine that with his love of sports.

“In high school I knew I liked writing and I knew I liked sports, so I started thinking of opportunities to bring the two together,” Parkhouse said. “In college I started moving more in that direction, going back and forth between wanting to work in writing or broadcasting, and ended up landing on the journalism side of things.”

Parkhouse’s solid reporting background served him well in his transition to INDOT as Media Relations Director, as demonstrated by his success with the organization’s Facebook page. While he has certainly filled this role well, Parkhouse was recently promoted to Director of Communications and will be passing the posting torch to a new hire in the coming weeks.

“It’s important that we continue to build our audience on social,” Parkhouse said. “Not everyone will do that in exactly the same way, but we do expect the person who takes over to continue to think of creative posts, whatever that looks like for them.”

At home, Parkhouse enjoys spending time with his wife, Tabitha, and their two children, Cecily, 4, and Cooper, 2.

“I love spending time with my kids, which is good because they take up a good chunk of my time,” Parkhouse joked. “My wife and I love to go to concerts together. It’s tough to get away right now, but we take advantage of that time when we can.”

From his initial move to the organization to his most recent advancement, Parkhouse has no doubt that INDOT is where he is supposed to be.

“I’d love to be at INDOT as long as they’ll have me,” Parkhouse continued. “I really enjoy working for the state for a lot of reasons. Where I once wondered where I might fit in as a sort of outsider coming from the news industry, it’s been great to find an employer who values that background and the work I’ve done while also affording a lot of opportunity to keep improving.”