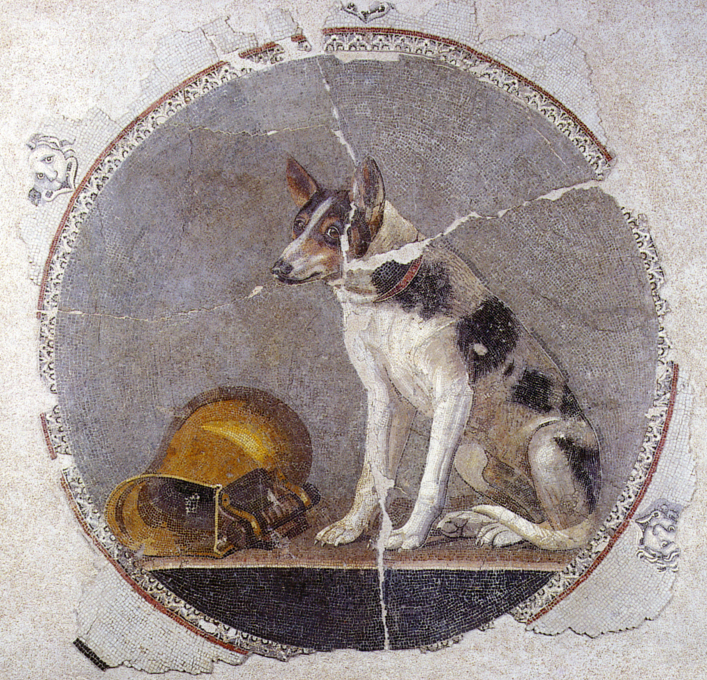 Anyone with a furry companion has known that feeling when they come home to find some precious item of theirs chewed, nibbled, broken, or otherwise despoiled and the frustration that rushed through their brain at that instant. This is generally quickly followed by the turned head and guilty, sullen gaze of your erstwhile domesticated friend that has just broken that sacred trust between human and canine that trails back to before the dawn of civilization. Their eyes avoid yours like two ping pong balls magnetically repelled from your own as if by a sudden reversal in polarity.

You’ve probably experienced this, but did you ever think to memorialize your dog’s shame for all time? That is exactly what one artist did in ancient Alexandria, Egypt sometime between 200 and 100 BCE. Using tesserae, made of small stone cubes, the artist recreated the scene of one dog’s humiliation that has lasted over two millennia and shows viewers a scene that could just as easily be viewed on someone’s facebook or Instagram feed nowadays: a red collared, spotted dog standing next to a knocked over vase, with an expressive look of guilt on its face.

The artist that made it would have been living under the Greek Ptolemaic dynasty and this is reflected in the Greek style of the mosaic, a common feature in Greek, and later Roman, art that would have adorned public spaces or private rooms. Clearly the artist had talent and used their prowess to express shadow, reflective light, and, of course, one small pup’s shame that has outlived kings, palaces, and empires.

Do you have shameful photos of your furry friends? If so, post them in the comments!