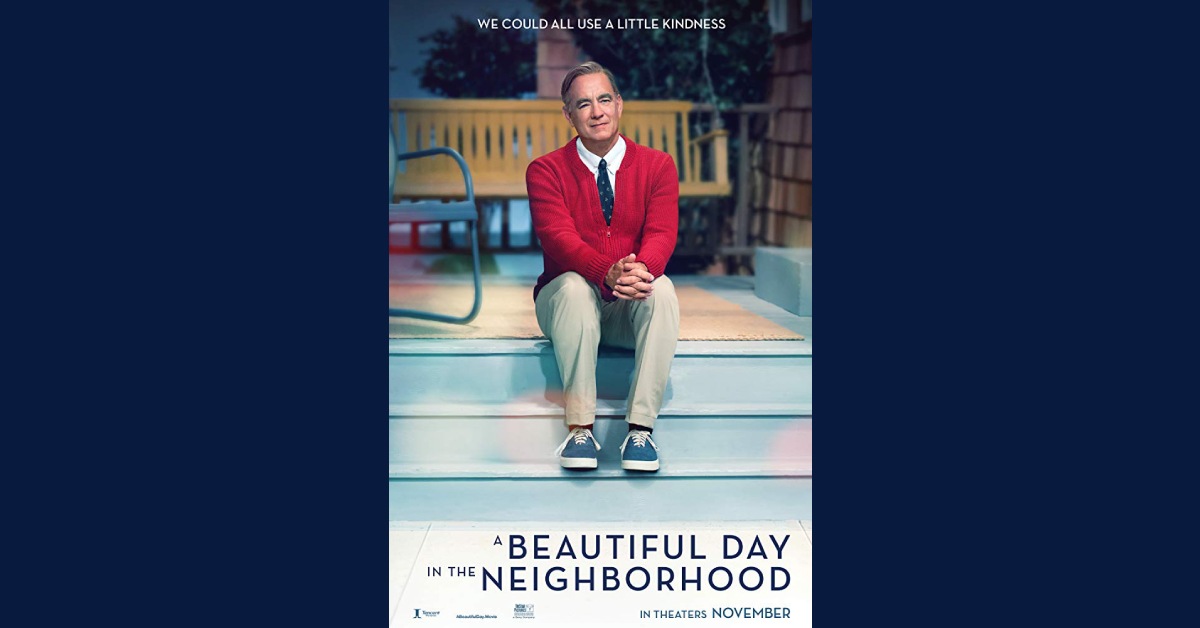 Magazine Journalist Lloyd Vogel (Matthew Rhys) suffers from a checkered past that has left him unwilling to communicate his feelings with anybody, including his wife. His father Jerry Vogel (Chris Cooper) has recently re-entered his life, and his complicated relationship adds to Lloyd's unhappiness. Lloyd’s life takes a turn, however, when he is assigned to interview TV’s Mr. Rogers (Tom Hanks). He is challenged to write an essay on the positive influence Rogers has on others. Fred Rogers may be just the man to help Lloyd open up his heart to others, and learn to forgive.

To begin, Director Marielle Heller does an astounding job of presenting “A Beautiful Day In The Neighborhood” as a continuation of the classic children’s program. Outside of Mr. Rogers, all of our favorite childhood characters make an appearance in this movie as well. Mr. Mcfeely, King Friday XIII, Daniel Tiger, and all of the other classic puppets make appearances. Heller transitions between real life and the television show flawlessly. I personally loved the way that Lloyd’s life issues are basically transformed into a brand new episode of “Mr. Rogers Neighborhood.”

Cinematography aside, the music in “A Beautiful Day In The Neighborhood” also excels. The score by Nate Heller sounds like it was produced thirty years ago, and in a positive way. From a simple Casio keyboard to some smooth brooding jazz, Heller provides a musical background that would make Fred Rogers proud.

Speaking of the titular hero, Tom Hanks spellbinds as Mr. Rogers from beginning to end. The vintage characteristics of this childhood idol are all there from beginning to end. It’s obvious that Hanks dedicated much time and effort studying Mr. Rogers, and it is on full display in this film. Don’t be surprised to see Hank’s name mentioned come awards season, he truly delivers one of his top performances yet. Although it is a smaller role, Chris Cooper is great as Lloyd’s father Jerry. He plays a great unsavory character but also does an excellent job of conveying a man that is trying his best to change for the better.

“A Beautiful Day In The Neighborhood” is a great movie that unfortunately has one flaw that permeates negative vibes throughout the whole film. This flaw is the writing and execution of the main character Lloyd Vogel. I have zero issues with Vogel being the central character of the movie, it seems like a great idea to show first hand that Fred Rogers was able to turn even the darkest of hearts to Happiness. My main objection, however, is that this theatrical version of Vogel is extremely unlikable. He only thinks of himself, pays zero attention to his newborn baby for the first 3/4 of the movie, and somehow tries to discredit the nicest man on earth. Does he become a better person by the end of the movie? Of course. Unfortunately, even Vogels' moment of clarity doesn’t necessarily make us like him anymore. The writers should have subdued his hate just a tad in the film. It would have had the audience side with him a little more, while still accomplishing their ultimate goal. Finally, there was also a dream sequence in the movie where Vogel is transported into the Mr. Rogers universe. It was kind of bizarre, I felt like it was misplaced in a movie based on true events.

“A Beautiful Day In The Neighborhood” is a feel-good movie that will have viewers of all ages leaving the theatre with a smile on their face. The production value is phenomenal, and excels at recreating the feel of the classic “Mr. Rogers Neighborhood”. Miniature sets, clothing, and music combine to place the viewer right in the living room of the show’s set. Tom Hanks hits on all cylinders as the kind and beloved Fred Rogers. His voice, look, and mannerisms bring one of America’s most beloved Television figures to life for a new generation to enjoy. The character of Lloyd Vogel is the one negative aspect of the film. His feelings and issues could have been presented in a manner that didn’t turn the crowd against him.

Issues aside, there is something here for viewers of any age. People who grew up with Mr. Rogers, or fans of Tom Hanks will definitely be more entertained than a random viewer. Regardless, Hanks will positively engage any moviegoer once he slips on the classic Rogers sweater. The warm and positive feelings evoked by this film make the viewer feel as if they are comfy and safe in there as well.