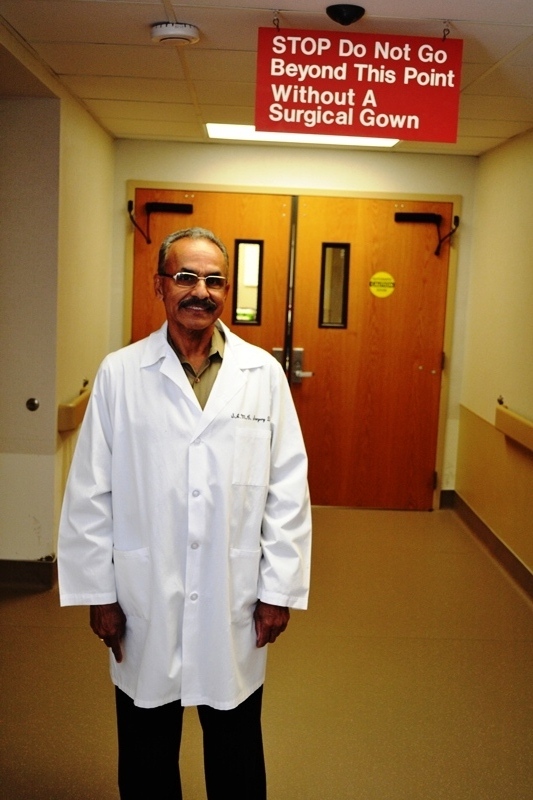 After joining the Franciscan St. Anthony Health-Crown Point medical staff in July 1974, just four months after the hospital opened, and being the lone physician remaining since that first year, P.R. Unni, M.D., has seen growth and improvements in myriad areas.

But an aspect that may not have been surpassed since the early days is one many people might not expect -- the cafeteria food.

“The patients and doctors really appreciated the food – it was some of the best in town. Restaurants would complain that they were losing business because of our cafeteria. Doctors would look forward to having dinner meetings here and we were told that even people who didn’t have to be at the hospital would come here just for the food,” Dr. Unni said.

The urologist said he was drawn to the hospital by a physician-friend who recommended it and by Crown Point’s “cozy, quiet, friendly atmosphere,” that remains to this day.

“It was a brand-new, modern hospital that became very busy and competitors were opening satellite branches to compete. We had an excellent staff – the nurses were friendly and the patients were very happy; they preferred St. Anthony to other hospitals,” he said. It also attracted his son, Ramesh Unni, M.D., who later joined the staff and also shares a practice with his father.

The bustling economic climate, spurred by the steel mills in the earlier days, likewise contributed to the hospital’s growth.

“There was a good industrial base in Northwest Indiana that made practicing medicine very stable from a financial aspect,” Dr. Unni recalled.

The following decades have brought numerous advancements in health care and the way it is practiced – some of it positive, some of it seeing growing pains.

“The advent of da Vinci robotic surgery has brought big changes to urology services. These days, 80 percent of prostate cancer surgeries are done with it. The surgery is less invasive and painful, there is less bleeding and in general, faster recovery. Many procedures are done as outpatients – patient satisfaction with treatment is much higher,” he noted. He also cited advancements in laser surgery for providing similar outcomes.

The overall health care environment has evolved into a challenging one of increased competition with “a lot of pressure to minimize costs,” Dr. Unni said.

“Insurance companies are seeking to reduce costs and patients complain costs are increasing too fast. There is pressure from industry and the government and health care dollars are shrinking,” he added.

The doctor-patient relationship also has evolved along with technology, with physicians often needing to spend more time explaining test results.

“With the Internet, people are gaining more knowledge of their bodies and sometimes becoming more demanding, wanting more CAT scans, MRIs, etc., and insurance companies resist expensive tests. The use of electronic medical records also takes more time, which can mean seeing fewer patients. It also has cut down on eye contact during visits, as we record the information on the computer, which sometimes makes them uncomfortable,” Dr. Unni said.

But he believes that process is improving and will more so, in time.

Dr. Unni said he has no plans to retire, as long as his health permits, and no plans to leave Franciscan St. Anthony Health.

“I still look forward to my patients and seeing them happy with their treatment makes me very happy. The positive feedback keeps me going. I also enjoy the friendly atmosphere here and in the community (he lives a few blocks from the hospital) and the camaraderie with the other physicians and nurses,” he said.