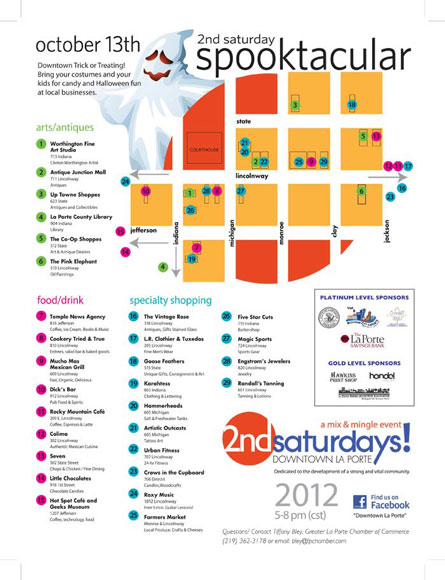 Halloween comes early to Downtown La Porte for the 2nd Saturdays Spooktacular and Downtown Trick or Treat. Downtown businesses stay open late from 5pm to 8pm on Saturday, October 13 and will feature treats and tricks for the kids. Bring the kids out in costume early for a fun filled downtown event. There are businesses on State Street, Jefferson Avenue, Indiana Avenue and Lincolnway that remain open late. For a full listing of businesses, visit the Downtown Facebook page.

The 2nd Saturday Spooktacular will also feature horse-drawn hay rides throughout downtown sponsored by Hensler Nursery. The hay ride pick up and drop off will be located in the Herald Argus parking lot at State and Monroe Street. Also in that parking lot will be a Spooky Car Show and an appearance by the Northwest Indiana Ghostbusters. Come out and see the Michiana Antique Auto Club members and friends with spooky versions of their classic cars.

This is the last 2nd Saturday of the year and will return in 2013.There will still be plenty to do downtown, including the Santa Parade on November 24, 2012 at noon. Attendees of the parade may vote on the best Holiday Window Display and enjoy a Santa’s Village after the parade. Individuals, groups and businesses are welcome to be a part of the Santa Parade, and parade applications and sponsorships are available at the Greater LaPorte Chamber of Commerce, 803 Washington Street, or by calling 219-362-3178.