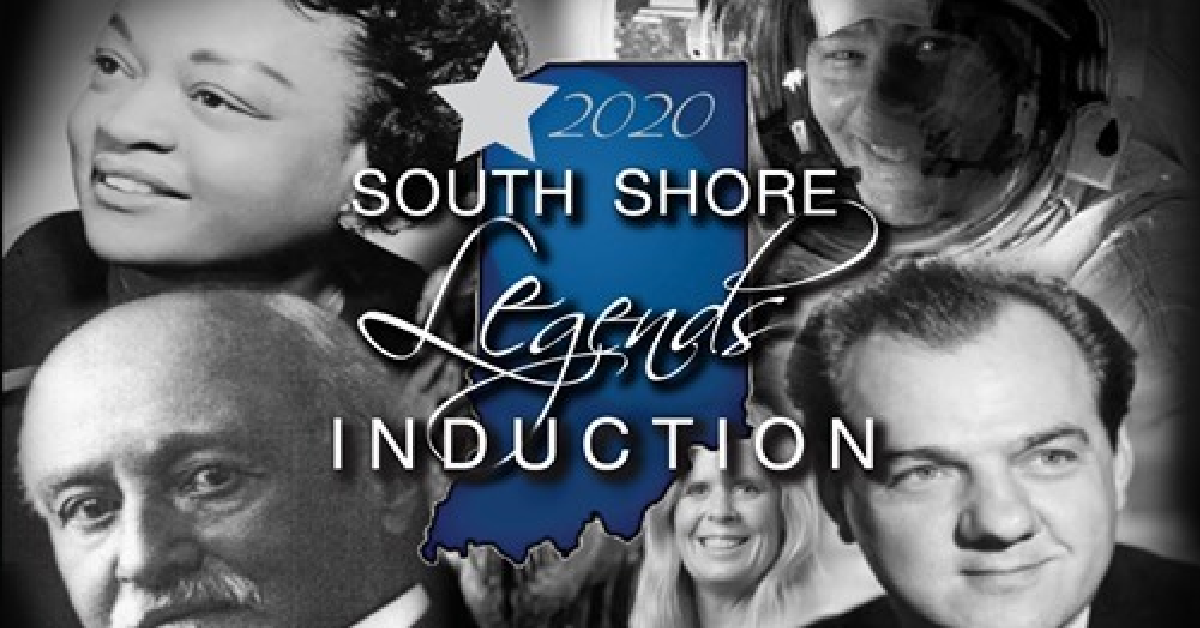 Two new Legends became the 77th and 78th inductees to be honored on the South Shore Wall of Legends at the Indiana Welcome Center on at 6 pm on Thursday, December 10th. The Wall of Legends Project is sponsored by BP Whiting Refinery.

The 77th Legend is Donald S. Powers (1920-2015), a WW II night fighter pilot who also served in Korean War, who despite modest beginnings helped create the Community Foundation of NWI, and among other philanthropic and distinguished organizations, later served as President of the Purdue statewide board helping to put the university on the world’s map for civil as well as electrical and computer engineering.

The 78th Legend is Alvah Curtis Roebuck, (1864-1948), a native of Lafayette, IN, who spent 15 years as a self-taught watchmaker in Hammond and later joined Richard Sears in cofounding Sears and Roebuck, one of the most transformative retailers in world history which would become America’s largest retailer over a century until eclipsed by Walmart in 1989.

Also recognized was the 17th recipient of a $1000 Legends Scholarship sponsored by First Midwest and managed by Legacy Foundation. Priscilla Obeng-Mensah, a student from Ghana attending Purdue University Northwest, is this year’s recipient. The purpose of the scholarship is to honor students who exemplify the Legends values in striving for a college degree.

In a first, because of Covid-19, the Legends induction was held on a “Facebook Live” event sponsored by NWI.Life, co-hosted by Speros Batistatos, President and CEO, South Shore Convention & Visitor’s Authority (SSCVA), and Chris Mahlmann, Founder, GreatNews.Life. Last year, the induction occurred just prior to SSCVA’s annual Christmas Party, which was postponed this year.

SSCVA, the Wall of Legends is based upon four values of Exploration, Courage, Creativity and Innovation. This is an all-volunteer initiative led by a panel of Judges representing the 7-counties of Northwest Indiana, said John Davies, founder and coordinator of this annual project. Stephen McShane, archivist, Calumet Regional Archives, Indiana University Northwest, served as Legends Consultant from its founding in 2004 until this year.

Typically, South Shore Legends are historical contributors, not modern-day innovators. Legends are individuals, living or dead, who have had a substantial impact and have lived or worked in the seven counties of Northwest Indiana, which are Jasper, Lake, La Porte, Newton, Porter, Pulaski and Starke. These individuals were “trailblazers” and “exemplars” whose records of personal conduct serve as examples to others.

He served as a night fighter pilot off of carriers during World War II. He joined the Navy shortly after Pearl Harbor and was discharged I946, but recalled to active service in 1950 and served as a jet fighter pilot in Korea. His beginnings in civilian life were modest. Upon graduation from Purdue University, he was employed as an assistant agent in the Lake County Agricultural Extension Office. He also served as Secretary of the Lake County Fair Board. He ultimately entered the insurance and real estate business opening the Don Powers Agency in Munster. He is known as the chief developer of Munster. He developed Briar Ridge Country Club, and contributed financially to creating significant initiatives such as the Center for Visual and Performing Arts and Community Veterans Memorial in Munster. He helped create the Community Foundation of Northwest Indiana, serving as its president and chief executive officer. He also impacted Purdue University Northwest and financial sectors, serving on the boards of Mercantile Bank and NIPSCO.  He also served for 15 years on the statewide Board of Trustees for Purdue University. From 1981 to 1989, he was President of the Board. The largest building program in the history of the campus was passed during his tenure. This included significant investments in the civil as well as electrical and computer fields of engineering and helped educate the next generation of engineers and innovators. Mr. Powers was nominated by Monsignor Joseph Semancik, Ph.D., and John Davies.

He lived and worked as a watchmaker for 15 years as a teenager and young adult in Hammond. He responded to a newspaper ad in the Chicago Daily News that Richard Sears put out shortly after opening a shop on Dearborn Avenue in Chicago seeking someone to fix watches. Roebuck ended up co-founding Sears, one of the most transformative retailers in world history, the largest retail company in America and the company that built Sears Tower. Sears and Roebuck partnered up while they were in their 20s and launched a catalog of watches and jewelry in 1888 that would eventually balloon to 532 pages and spawn a mail-order empire that shipped everything from furniture to snow blowers to laxatives and motor buggies, bringing the world to a still largely rural America. Ironically, the Lafayette native “decamped” to Chicago because of romantic disappointment. According to the Entrepreneur Hall of Fame, which bestowed national recognition on Roebuck, he “wanted advancement and like many Hoosiers saw Chicago as the city of new opportunities.” Originally, the company was named the A.C. Roebuck Co., after Roebuck. It was renamed Sears Roebuck and Company in 1895. Wanting a quieter life, Roebuck sold his stock for $25,000 at that time. Roebuck returned to the company twice, ending his career compiling a history of a company that would grow into America’s largest retailer.  In other business ventures, he invented a typewriter and distributed motion picture machines. Mr. Roebuck was nominated by Joseph S. Pete.