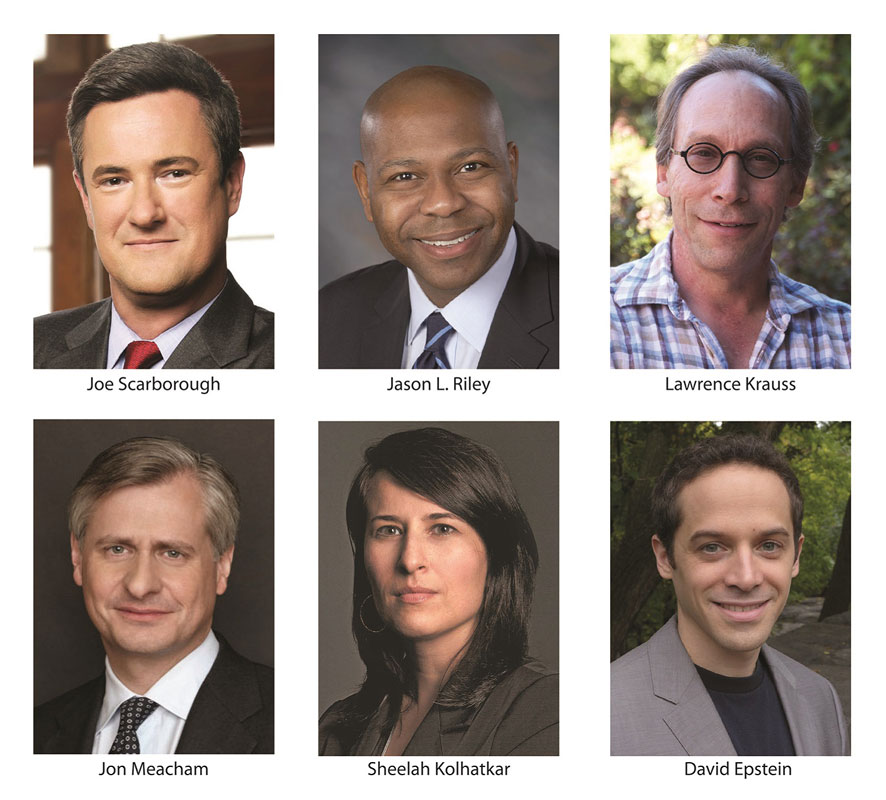 The Forum continues its commitment to presenting guest speakers who explore compelling issues, providing audience members a unique opportunity to hear from experts in their fields speak about topics in the news and to pose face-to-face questions in a town-hall style forum.

All programs will take place in the James B. Dworkin Student Services and Activities Complex on the PNW Westville Campus, 1401 S. US Hwy. 421. Each program will begin at 4 p.m., with doors opening at 3 p.m. Forum Executive Director Leslie Plesac will host the series.

The 2017 Sinai Forum season speakers are:

As popular on stage as he is on TV, Scarborough brings the same energy to his speeches as he does his morning show. With his off-the-cuff commentary, he offers a dynamic and fast-paced perspective on the current political and media landscape and the headlines of the day.

Scarborough has been named to the prestigious “TIME 100” list of the world’s most influential people. He and his television co-host Mika Brzezinski are listed in “Vanity Fair’s” top power players in the media. Scarborough served as a member of Congress from 1994 to 2001.

Jason L. Riley - Sept. 24 at 4 p.m. CDT
The State Against Blacks
Jason Riley’s thesis is that government efforts to help the black underclass – which began in earnest with the 1960s War on Poverty and Great Society programs – have a poor track record. He will discuss why many of the socio-economic gains that occurred among blacks in the first half of the 20th century have been stalled or reversed in the second half, even as civil rights legislation passed and black political clout grew enormously. He will include his thoughts on why this should inform policy decisions going forward, but rarely does.

Riley is a senior fellow at the Manhattan Institute, a columnist for the “Wall Street Journal” and a Fox News commentator for more than a decade. He wrote the books “Let Them In,” which argues for a more free-market focused U.S. immigration policy; “Please Stop Helping Us” about the track record of government efforts to help the black underclass; and “False Black Power?” an assessment of race relations in the Obama era, to be published later this year. A book signing will follow the program.

Lawrence Krauss - Oct. 15 at 4 p.m. CDT
The Greatest Story Ever Told – So Far
Award-winning theoretical physicist, “New York Times” bestselling author and advocate for scientific reason, Lawrence Krauss will tell the story of the discovery of the hidden world of reality – a grand poetic vision of nature – and how humans find their place in it.

Krauss blends research and storytelling to reveal the lives and minds of the remarkable, creative scientists who helped unravel the fabric of reality, using reason rather than superstition and dogma, to understand why we exist in a universe where fact is stranger than fiction.

Krauss is the author of 10 books, including the New York Times bestsellers “The Physics of Star Trek” and “A Universe from Nothing”, and his most recent book, “The Greatest Story Ever Told – So Far.”

“Scientific American” called him a rare scientific public intellectual dedicated to educating the public about science. A book signing will follow the program.

Jon Meacham - Oct. 29 at 4 p.m. CDT
Understanding Trump: A Historical Perspective
Presidential historian Jon Meacham will explain why he believes that we are in “uncharted American waters,” and why, in terms of American politics, “we’re in a new day.”

Meacham takes a nonpartisan view of the populist fervor that ascended Donald Trump to the nation’s highest office. Meacham has studied the president as he continues to break precedent on issues from his combination of public and private interests to his use of social media.

A Pulitzer Prize-winner and contributor to “TIME” and “The New York Times Book Review,” Meacham is known for his depth of knowledge about politics, religion and current affairs. He understands how issues and events impact our lives and why historical context matters.

His biography, “Destiny and Power: The American Odyssey of George Herbert Walker Bush,” debuted at number one on the “New York Times” bestsellers list. His book, “American Lion: Andrew Jackson in the White House,” won the Pulitzer Prize in 2009. A book signing will follow the program.

A lively, insightful speaker, Kolhatkar will discuss the rise of a powerful new class of billionaire financiers during the past two decades which marked a singular shift in the American economic and political landscape, culminating in the election of President Donald Trump and the unprecedented wealth of his cabinet members.

She was a features editor and national correspondent at “Bloomberg Businessweek” and has profiled well-known personalities including Massachusetts Sen. Elizabeth Warren, Pimco founder Bill Gross, hedge fund mogul John Paulson and President Trump. A book signing will follow the program.

David Epstein - Dec. 3 at 4 p.m. CST
The Sports Gene: Inside the Science of Extraordinary Athletic Performance
In this exploration of athletic success and the so-called 10,000-hour rule, Epstein will tackle the nature vs. nurture debate and trace how far science has come in solving it. His research helps to rethink the very nature of athleticism.

As a writer covering science, medicine, sports and frequently combining all three in the same project, he will share how his research led him to tell the story “The DIY Scientist, the Olympian, and the Mutated Gene.” He will share the story of Jill Viles, a muscular dystrophy patient who had a theory that she and Olympic sprinter Priscilla Lopes-Schliep shared the same gene mutation, a theory that led to significant research and exploration with biotech companies offering to study Viles’ genome for scientific discovery. A book signing will follow the program.

Students who show a valid high school or university I.D. may attend at no cost.

Tickets can be purchased by credit card online at www.pnw.edu/sinai-forum or by cash or check at any of the following locations: The Lubeznik Center for the Arts, 101 W. Second St., Michigan City; Kabelin Hardware, 512 Andrew Ave., La Porte; or the Porter County Community Foundation, 1401 Calumet Ave., Valparaiso.

Additional information about the Purdue Northwest Sinai Forum is available at www.pnw.edu/sinai-forum.