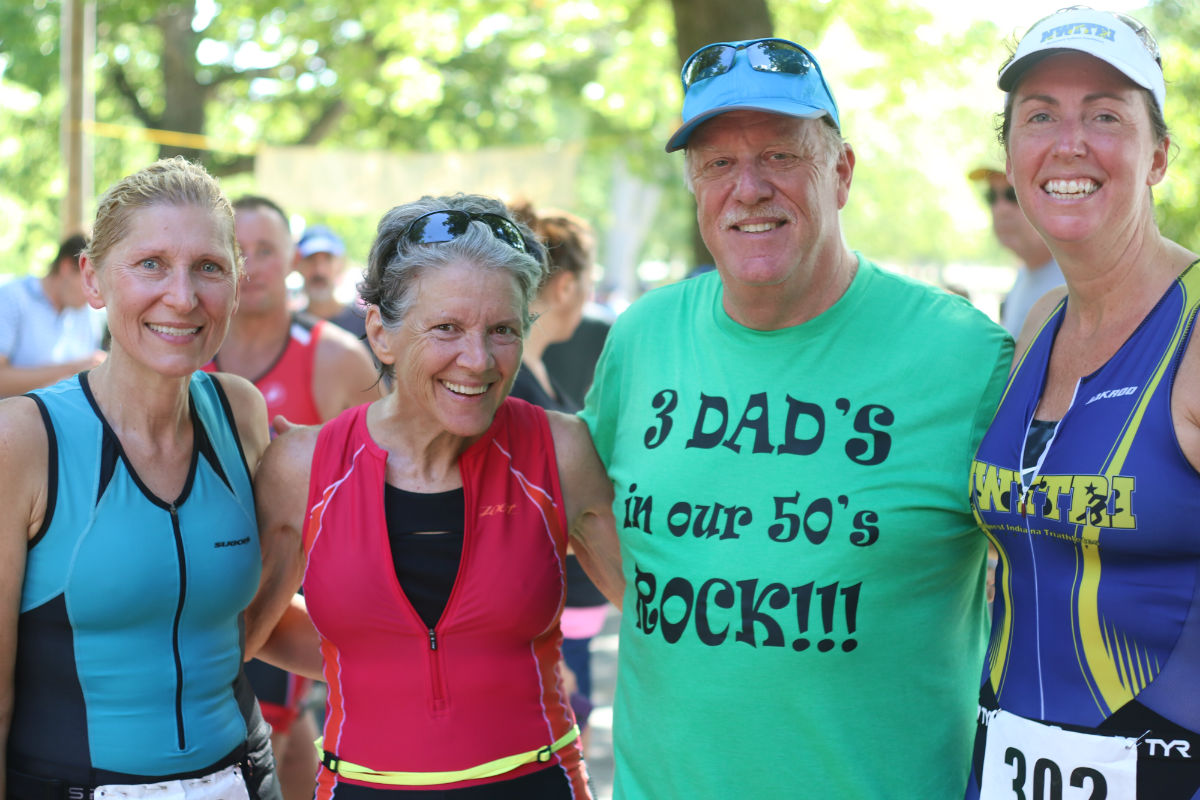 Triathlons are not for the unmotivated. The combination of a quarter-mile swim, 12.4-mile bike ride and a 3.4-mile run is a tough feat for anyone. Despite the challenges, over 300 participants decided to take up the 37th Annual La Porte County Family YMCA Triathlon on Saturday morning. Athletes of all paces and ages took part in another fantastic run of the triathlon, one that couldn’t happened on a more gorgeous morning. Among these athletes was Rick Gosser, pictured above. Rick sported a shirt from Tri4Glenn.com - a website dedicated to the memory of a fellow triathlete. 100% of the proceeds raised from these are shits are being donated to Glenn's daughters.

“We’re so happy that we have great numbers and that everyone’s come out here to be part of this again. The proceeds from the triathlon supports a great cause - our scholarship fund - and every bit helps,” explained Cindy Berchem, CEO of the La Porte County Family YMCA. “There are people here from all different places across the country, and of all different ages. We’ve also been blessed with great weather and warm water, and this is the first year in a long time that we’ve gone without wetsuits. All around it’s a great morning for us and for the people who come out to be a part of this.”

No matter what year, the La Porte County Family YMCA’s triathlon is a great draw to the people of La Porte and from around the region. Located at the beautiful Soliders Memorial Park, it’s a easy connection on why the race has been running for over three decades. Watching all of the participants “dip, ride, dash” across the park, it was obvious that there were no restrictions for anyone who wants to "try" the tri. It only takes persistence.

Carol May Osborne, a La Porte resident who turns 84 years young next month, participated in the bike portion of the triathlon in a team with her other family members. Osborne’s granddaughters and grandsons participated in the race with her, with her great-granddaughters cheering on the sidelines, and explained that the tri is a tradition in their family. Though this might be her last race, Osborne stated that she can’t stay away from being a part of the triathlon.

“I’m here this morning because my son told me that since I could do a race 32 years ago - because I’m so old and it was so long ago that I had to spin the wheels myself doing the Aqua 10 in Minneapolis - and he thinks I could still do it now,” Osborne stated. “I got hooked after that race, I’ve never felt a feeling like when you cross a finish line. This is probably my last triathlon, but I’ve done this one for 15 or 20 years. The tri is really a family affair, and I’m happy that I get to keep doing this with all of them.”

Though there were regular participants like Osborne participating in the tri, every year is also a new opportunity for someone to take their first ever dive into the race. On the opposite end of the spectrum Mark Gray, a 13 year-old from La Porte, ran his first ever tri on Saturday. With some encouragement from his friend and a little bit of courage Gray completed his first triathlon - though it certainly wouldn’t be his last.

“I got a text about the race and thought doing this would be fun, and it was,” Gray stated. “The tri was a bit longer than I thought it would be, and the sun got to be a bit harsh, but it was great to finish. It was awesome because I passed some people and they kept saying like ‘Good job, buddy.’ That felt really great. I can’t wait to do another one.”

As the morning came to a close and the runners crossed the finish line to be reunited with their family, friends, teammates, and their biggest fans, it became clear why the La Porte County Family YMCA has made this a La Porte tradition for many different generations: there is no other place that exudes more positivity and optimism during a single morning. The tri bikers, swimmers, and runners - no matter what place they came in - all had a great morning under the summer sun. This tri will surely be back for another great year and for more great years in the future.