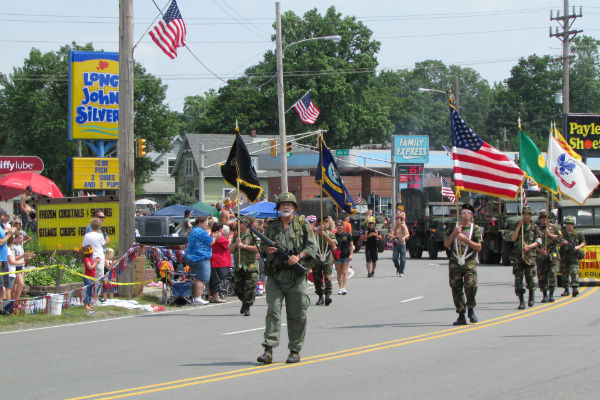 We would like to make the public aware of our arrangements for the Fourth of July Parade this in terms of traffic and parking restrictions. Traffic will be diverted off of State Road 2 beginning at 8:30 AM on the Fourth of July. No traffic other than the parade units will be allowed on State Road 2 (Lincolnway) between Philadelphia Street and Andrew Avenue on the day of the parade between 8:30 AM and the end of the parade.

Access to the staging area for the parade will be restricted well in advance of the parade by barricades as will access to the parade route when it is closed. All motorists should remember that driving around barricades is against the law and they will be cited if they do so. For events like the Fourth of July Parade pedestrian safety is the number one priority of the La Porte Police Department and we will not tolerate any dangerous or illegal driving behavior.

Parade spectators are reminded to adhere to the city ordinance which prohibits the placement of blankets, chairs and other items along the parade route more than 24 hours before the official start of the parade. No blankets, chairs or other items may be placed along the route before 10:00 AM on July 3, 2013. Violators will have their belongings confiscated and will be cited.

Those folks attending the parade are asked to be considerate of everyone around them during the parade. Since the parade is first and foremost a family event; officers have been given orders to arrest any intoxicated, unruly or belligerent spectators. Fireworks violations that occur along the parade route are also going to be addressed aggressively due to the public safety issues involved. Citizens are reminded that due to the crowds, noise and confusion, the parade is definitely not a good place to bring pets. Parents are also strongly encouraged to closely supervise their children and perhaps even attach a note to the clothing of younger children indicating where the parents are along the parade route; just in case a child wanders off.

The detour route around the city for SR 2 will be Boyd Boulevard to US 35 to Crescent Drive to Eighteenth Street. All east-west streets north and south of the parade route will be open. The main detour route for east-west traffic through the downtown area will be along Factory Street, Brighton Street, Washington Street, State Street, L Street, Second Street and Colfax Avenue to and from State Road 2. The detour for US 35 from the north will be to exit the US overpass and then travel either east or west from there. The detour for US 35 from the south will be either Boyd Boulevard or Crescent Drive as previously mentioned. We are reminding motorists that the traffic on the Fourth of July is always very slow and congested; so, if you have a low tolerance for these types of traffic conditions, you might want to stay out of the downtown area.