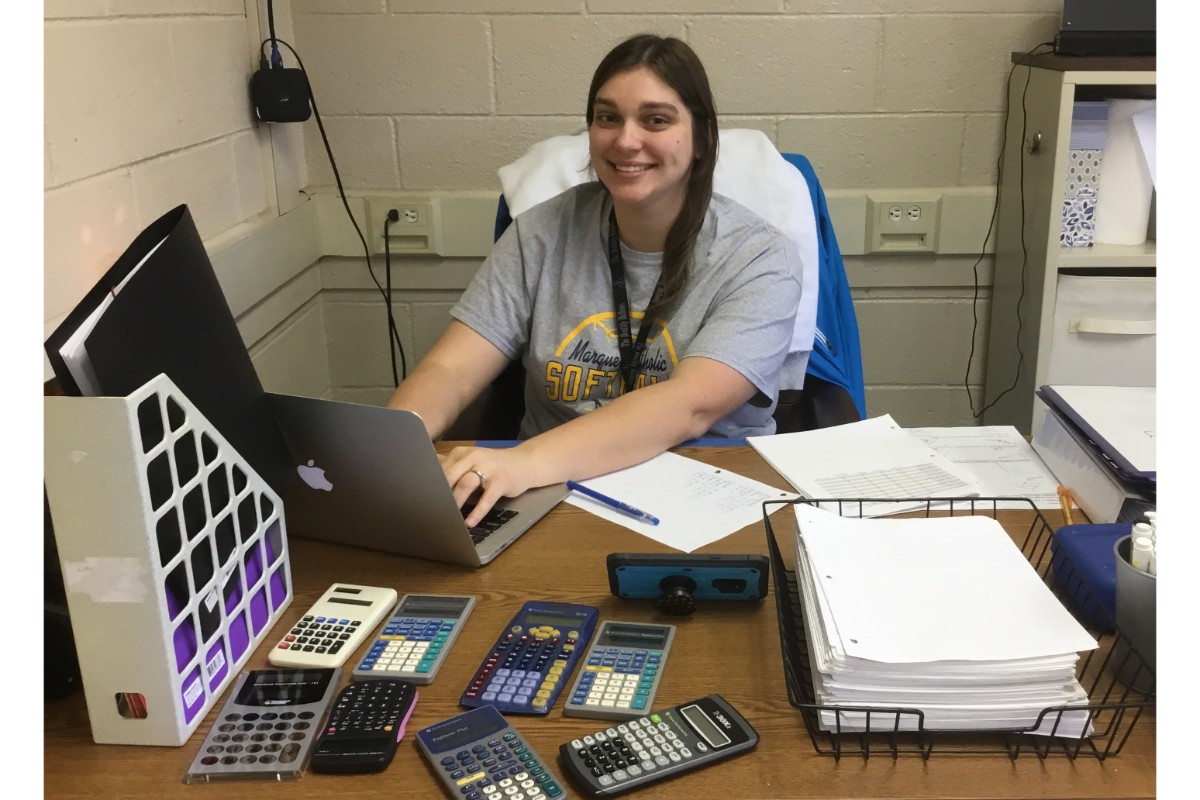 Teacher Spotlight
Mrs. Theresa Strole is one of the newer teachers at MQTT. She has been teaching for 7 years at other area schools, but this January will be her first full year as a member of the MQTT family.

Strole teaches geometry because she likes “the logic of math. It’s organized and methodical, but you still get to be creative in deciding how to approach problems. I get so excited about some of the topics I get to teach, and I hope that I can get at least a few students as excited about math as I am.”

Her teaching philosophy is student-centered.

“I like students to be in charge of their own learning,” Strole said. “I try not to run a class where I’m just giving the notes, and students are just copying. I like students to think and build notes as we go so they can see the connections between past and current material for themselves.”

Her favorite part of MQTT so far is “working with the students. I love when someone asks a question or makes a comment and I can tell they’ve made a new connection in their mind.”

She is inspired by “several great teachers” who taught her. Strole “wanted to work hard for and make them proud.”

It’s never a dull day in Strole’s classroom. Some of her favorite comical moments in class include “the day-to-day comments students make without thinking...like the student who told me, ‘I think autumn is my favorite month.’

“It always strikes me as funny when students quote me to each other,” she continued. “I had a student who was going to give a performance and was nervous what his classmates would think. Another of my students said to him, ‘It’s like Mrs. Strole says: ‘You’re weird. Just own it!’”

Outside of school, Strole can be found grading with her husband who is also a math teacher. The pair loves spending time with their two cats, as well as friends and family.

Student Spotlight
Destiny Harrington is an ambitious sophomore at MQTT. Harrington is a student in the MQTT University program, as well, which allows students to graduate with an associate’s degree at the end of high school. She is a member of the MQTT Lady Blazers basketball team and plays post.

Harrington “likes how physical it is and the hands-on nature of the sport. I enjoy being on a team, and the basketball team is an amazing one to be on.”

This season her “primary goal is to have fun and just work on bettering myself and the team as a whole.”

Harrington also is involved in her community.

“I helped out at different events at my church. I also help out some of my neighbors doing small tasks like laundry.”

Her inspiration is her parents, and “it is because of their hard work and determination” that she “gets to do so many things that I wouldn’t be able to otherwise.”

Her favorite part of being a MQTT student is “all the people and experiences that we get to have. We always get to meet new people through the exchange program here.”

Her advice to any new students is, “There’s nothing to be nervous about. Everyone is welcoming, and you will fit right in.”

December Magic
To kick off the Christmas season, on December 2, students had the opportunity to travel to Chicago for the Christkindlmarket. This was December’s Global Fellowship trip. Students had time to browse the market and experience the German culture.

Then, they walked to admire the Macy’s Christmas window display. Afterwards, they had free time to do some Christmas shopping and catch a bite to eat. The group reconvened and finished off the day with ice skating at Millenium Park.

Zoe Kolosci went on the trip and commented, “I knew this would be a great experience to spend some quality time with my friends so I decided to attend this month’s Global Fellowship. I also went on the same one last year. Global Fellowship is a great way to experience other cultures that you might not get to be part of otherwise.”

Abby Ryan also had the opportunity to go.

Overall, it was a wonderful holiday experience for everyone who attended.

Also, there was a “Holiday Bake-Off” on December 14. Students whipped up a masterpiece or baked a family recipe, and brought it in to be judged. After judging, students had the opportunity to try some of the delicious treats. December 14 was also Ugly Sweater Day. Students paid $2 to wear their favorite “ugly sweater” to immerse themselves in the season.

Another event MQTT students took part? Adopt-A-Family tree. Students could take a gift tag with an item to purchase for a family in need, such as hats and gloves or a board game. The program supports Catholic Charities and families in need. ‘Tis the season for giving!