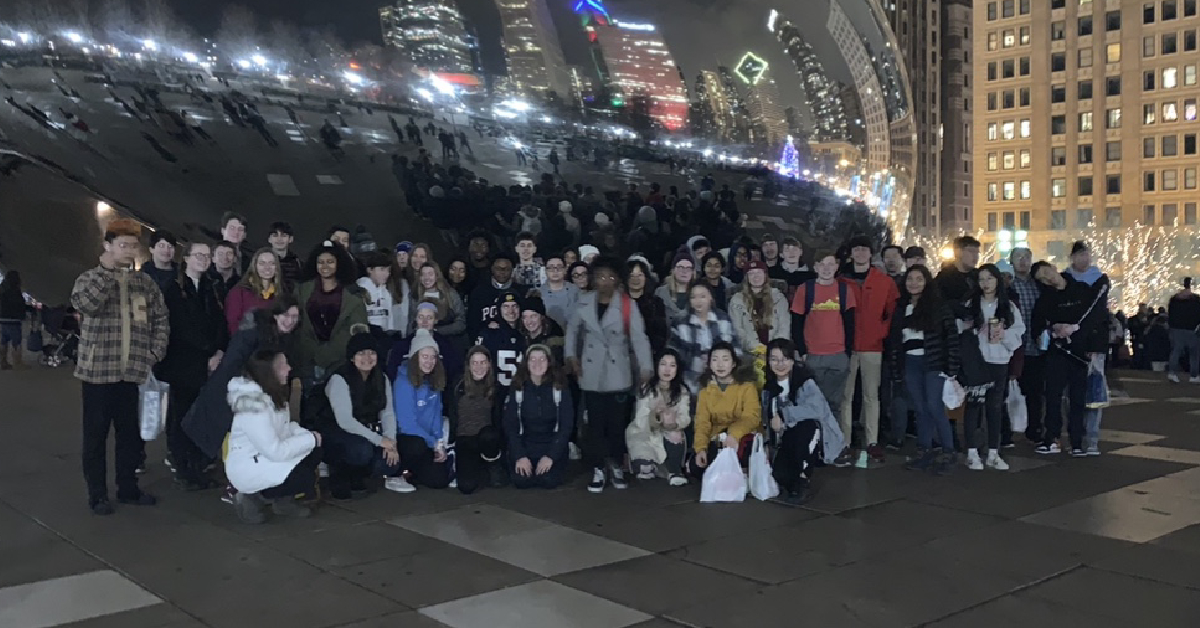 On December 8, two busloads of Marquette students and chaperones headed to the Christkindlmarket at Daley Plaza in Chicago. The open-air market featured stands full of souvenirs, food, and beverages, giving guests a glimpse at Eastern European Christmastime. Marquette students were allowed to roam the market, speak with vendors, and enjoy the atmosphere of Christmas lights and apple cider. Once they were finished, the students checked in with their chaperones and the group walked to Macy’s to see the window displays, opulently decorated for the holidays. After one more headcount, the students were given a few hours to explore the city in before meeting in the evening at Millenium Park for ice skating and dinner. The group skated and took photos with the Millenium Park Christmas tree and the sculpture Cloud Gate, and then headed back on the bus after a long day in the city.

The annual trip to the Christkindlmarket is arranged by the Global Fellowship Club of Marquette Catholic High School. The club aims to provide cultural activities to allow the students to widen their horizons through first-hand experiences. Originally, it was named the “International Club” and provided the international students of Marquette opportunities to experience American culture through trips to the Loop, Chinatown, and the cities of Northwest Indiana. Over the years, it evolved to allow Marquette students both local and international to come together to share these experiences. The club holds several events throughout the school year in conjunction with visiting Chicago, such as visiting the Don Quijote restaurant in Valparaiso to enjoy authentic Spanish food. The club is sponsored by Christine Roder, but students weigh in on the events they are interested in experiencing, and each event is open to the whole student body. The club has had strong support over the years for its inclusion of all students and the rich cultural experiences it provides.

Christine Roder has been part of the international program since she began teaching at Marquette nine years ago. She oversees the World Language Lab and teaches English as a New Language (ENL). In the World Language Lab, students can independently study and practice languages at their own pace using Rosetta Stone, a language learning application. As an ENL teacher, Roder helps students to advance their proficiency in English. The school welcomes international students from South America, Europe, and Asia, and they come with very different cultural backgrounds that require Roder to have a more dynamic approach. Much of Roder’s involvement in the program is making sure that the students have made a smooth transition into American culture, as well as Marquette’s unique culture as a community.

Joining the Marquette community is a smooth process for the international students because Roder has made it so personal. At the beginning of the year, she walked each student through the technology, campus, and schedule. She then focused on helping them build relationships with their teachers, from writing a proper email to asking for a recommendation letter for college applications. Finally, she remains accessible to support them through their learning and growth.

“Making connections with students is what it’s all about,” she said.

Roder’s makes it clear that being a teacher is about advancing and strengthening students to be global citizens.

Roder is an alumna of Marquette Catholic High School. She attended Western Michigan University and earned a Bachelor of Arts in secondary education and Spanish, and an ENL endorsement. She returned to Marquette to teach nine years ago, appreciative of her own Catholic education and with a desire to provide her students with the same opportunity.

“I wanted to be for my students what Karen Breen [English Dept] and Sherry Remijas [Spanish] were for me,” Roder said. The greatest reward, in Roder’s words, is watching the students grow and learn during their time here.

Ally McConnell is the only senior on the Lady Blazers basketball team. As the captain, she upholds a lot of responsibility on and off the court. During practices and games, her younger teammates look to her for guidance, leadership, and encouragement. McConnell was part of the two-time state championship team, and she hopes to help pass that legacy to the team’s new faces.

“The most rewarding aspect is knowing that I am playing for my school and making a name for myself when I leave Marquette,” McConnell said.

She also plays varsity volleyball and softball. According to her, the most demanding aspect of being a student athlete is balancing athletics with schoolwork.

As McConnell plans to attend college to study elementary education, keeping her grades up is very important to her. She hopes to gain scholarships for her participation and accomplishments in sports, but she works hard to excel in her schoolwork, too. She is thankful for the teachers at Marquette for their flexible instruction and support in her endeavors. Her biggest advice to her fellow students is to go do the things that [they] always wanted to do, even if it seems impossible.

The Marquette choir will be presenting the Celtic Christmas cantata “Have You Heard?” on December 11. The concert also displays the talents of individual student musicians and singers. It has been organized by Amy Crane, and the cantata will be directed by her. The concert will take place on December 11 at 7 p.m., in Marquette Catholic’s Theatre.

Marquette’s Fall 2019 final exam week will begin December 16 and will end on December 19. Over the last few weeks, students and teachers have been preparing for the assessments that will close the semester. In addition to ending the semester strongly, all students have met with Mary Kay Mark and Tracy Wagner in academic advising to build their second semester schedules. The Spring 2020 semester will begin on January 6.