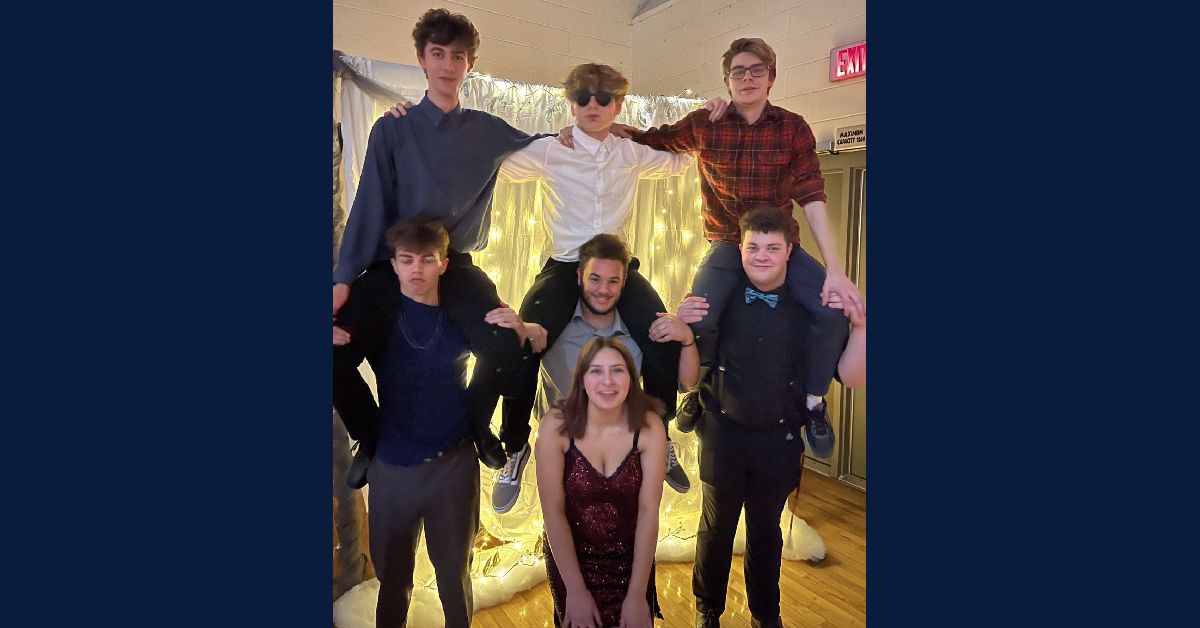 Westville High School (WHS) celebrated homecoming last week. Leading up to the homecoming game, there was a spirit week.

The first day was Mathlete vs Athlete, where students either dressed as a nerd or an athlete; the second day was Adam Sandler Day, where students were asked to dress as the star Adam Sandler does in baggy clothes; day three was Dynamic Duo Day, where people dressed as their favorite duo from popular culture; day four was Soccer Mom vs. Barbecue (BBQ) Dad, where students showed off their best impression of a soccer mom or BBQ dad; and the final day was Hat Day as well as dressing in orange and black to show Blackhawk pride.

Many students had a ton of fun this year with the different themes.

Friday, December 9, there was a pep rally before the school day was over. The cheerleaders did a routine to the senior class’s song, “Feel This Moment” by Pitbull featuring Christina Aguilera. Along with the cheer routine, there was a free throw competition between two WHS teachers and students.

The homecoming game was against Boone Grove High School and both WHS boys’ and girls’ teams played.

WHS won against Boone Grove for both tips of the game, with the boys’ game ending with a final score of 51-23.

The next day, December 10, the homecoming dance was held. The theme for this year was Winter Wonderland. It started at 8:30 p.m and ended at 10:30 p.m and was held in the upstairs gym.

All the students who attended had a wonderful time dancing to music and talking to friends. Everyone came dressed up in fancy attire appropriate for the homecoming dance. The students and staff who helped with putting the event together did a fantastic job with the decorations and food. The dance truly looked like a winter wonderland.

Next week is finals week at WHS, and students are working diligently to prepare for their exams.

Finals week is a tough but rewarding time for students. It means that winter break is finally on the horizon.

The week is a shortened one, with students only coming to school Monday through Wednesday.

Each day, either two or three finals will take place leading up to the last day before winter break.

There will also be a talent show taking place held by Senior Melody Pearson and English Teacher Emily Wagner. It will be held on January 9 in the upstairs gym at 6 p.m.

It costs five dollars for entry, and all proceeds go to supporting the Drama Club.

The talent show is for performing any talents such as singing, dancing, or magic tricks, to name a few.

Candace Archer is the head of the Fine Arts Department at WHS. Archer teaches theatre, band, and choir. It is Archer’s fourth year teaching at WHS.

“I’ve known my high school music teacher since fourth grade. He is the one that made music click for me. I’ve always loved music, but he made the music theory part click for me,” Archer said.

Archer’s favorite part about teaching the Fine Arts, theatre specifically, is putting on the production.

Archer enjoys working with groups in band and choir. Archer teaches them the songs and helps them when it comes time to perform them at the concerts.

Due to a student not being able to participate in the theatre class’s recent production, Archer stepped up to the plate and volunteered her time to be a part of the main cast.

“My favorite part of being part of the cast was that I felt like I was able to get closer to the entire class. Even though we skipped a few lines, we covered, which is something that every director hopes that their cast will be able to do,” Archer said.

Archer is also the director of the spring play, "Peter Pan." Currently, production is going very well and the actors have everything blocked.

“It is a fun experience overall, working with all the age levels from kindergarten to seniors. Everybody is so different,” Archer said.

Outside of WHS, Archer is a part of the Great Lake Sound Chorus as well as a church chorus.

“Don’t take life too seriously. You will never make it out alive," Archer said.

Archer’s dedication to WHS as a whole is extremely admirable. Archer has a lot on her plate but still manages to carry a friendly spirit and always has a positive attitude.

Joshua Beadles is a senior at WHS and a cheerleader for the Westville Blackhawks. He is the only male cheerleader on the team.

“It is definitely an experience, but I think growing up in a predominantly female house prepared me,” Beadles said.

Recently Beadles went All-American, an honor bestowed upon amateur athletes who are considered to be of high regard, for his work as a cheerleader. He is the first male cheerleader in WHS history to achieve this feat.

“I am thankful for the opportunity, and I am glad I made All-American. I would like to thank my coach, Robyn Markos, for helping me along the way and giving me the skills necessary to become an All-American,” Beadles said.

Along with being on the cheer team, Beadles also is taking many college courses at WHS such as the English Composition class (W131) through Indiana University.

“It helps me prepare for college and it is one less college class I have to take,” Beadles said.

The W131 class is not the only difficult class Beadles takes; he also takes AP Calculus. In his junior year, he took a Dual Credit Pre-Calculus class through Ivy Tech.

“I decided to take Calculus because I feel like it would be a waste to take Pre-Calculus and then not take Calculus. My favorite thing about Calculus is that it is a smaller class, so Mrs. Michelle Lancaster can help us more,” Beadles said.

Beadles plans on going to Purdue University Northwest (PNW), but his plans might change along the way. Beadles is determined to major in kinesiology, which is the study of the body’s movement.

“I decided to major in kinesiology because it is something that interests me and that I can apply to daily life. I like that PNW is close to home and is less expensive than Purdue’s main campus,” Beadles said.

Beadles is most excited about the variation that comes with college life and making new experiences.

In Beadles’ free time he enjoys working out and playing video games like “Retro Bowl” and “Fortnite” with his friends.

“I enjoy playing video games because it is one of the main ways I stay in contact with my old friends. When I win a game, I get a rush of adrenaline,” Beadles said.

Beadles is an inspirational and determined person. Beadles always put forth his best effort when it comes to schoolwork and his activities outside of school. He is always kind to everyone he knows, and always has a smile on his face.

“I try to spread joy and laughter everywhere I go because there is not enough happiness in this world,” Beadles said.