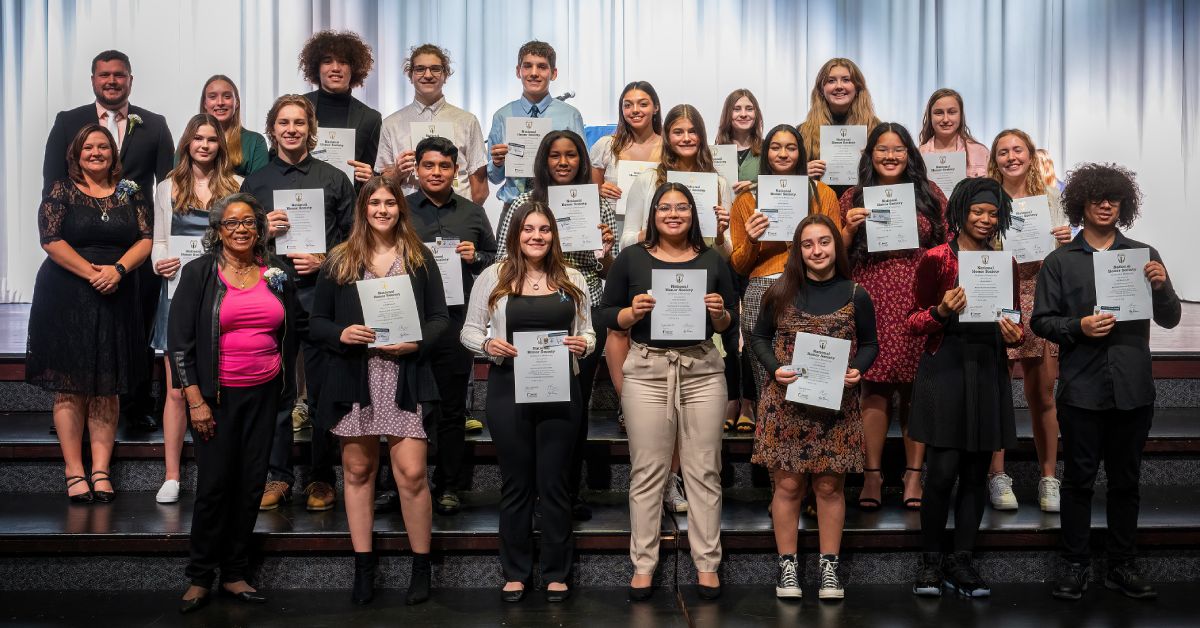 Character, scholarship, leadership, and service - these are the four pillars a National Honors Society (NHS) student must embody. Being considered for the NHS is a daunting task and quite strenuous to achieve. On October 27, NHS held a beautiful ceremony in the auditorium where around 20 new members were inducted.

The fall sports have been put to a complete rest as the Michigan City High School (MCHS) Athletic Department held the Fall Sport Awards ceremony. Girls Soccer, Boys Soccer, Girls Volleyball, Girls Golf, and Boys Tennis all gathered in the auditorium to receive the MVP award and Wolf award, which represents the athlete who works hard and keeps the team morale up.

Winter sports have finally begun, with Girls Basketball kicking the season off on November 2 at Hobart High School, and more recently the Girls Swimming and Diving teams had their first meet at home.

Anticipation has been building before the boys’ first basketball game of the season, but there will be a Boys Basketball blue-gray scrimmage held November 18 to display the boys team in action.

With Thanksgiving around the corner, the MCHS students are filled with excitement over the nine day break that accompanies the holiday.

The week following Thanksgiving Break is sure to pick up MCHS students' spirits.

December 2 through December 4, "The Addams Family Musical” will be brought to you live in the MCHS auditorium. Students and fans alike will be able to view the hard work the theater students put in for a memorable performance.

Shortly following the musical production, MCHS will be hosting “One City One Sound,” the district-wide music concert. At this spectacular event, the MCHS band and choir members, as well as middle and elementary students in the Michigan City Area Schools (MCAS), will perform a series of winter and Christmas songs.

Many teachers at MCHS have also once attended the school. Many students often forget that teachers were once students and had similar experiences.

Ashley Koza is the Spanish III and IV teacher at MCHS as well as head gymnastics coach. She herself attended MCHS as a gymnast, and her experiences from being a student and athlete continue to affect her way of teaching and understanding today.

At the ripe age of two years old, Koza began her journey in gymnastics. Koza began competing when she was between the ages of six or seven, and transitioned to a local gym called Platinum Gymnastics LLC. She ended up quitting gymnastics around middle school, but through much coercion from coaches and the MCHS gymnastics team, she came back for high school gymnastics.

During Koza’s freshman year of high school, the MCHS team had a very young group of girls. This allowed the team to go through a building period of strengthening and developing.

In Koza’s freshman year on the gymnastics team, about a week before her conference meet, her dad passed away unexpectedly. After this, gymnastics became a big constant in her life; it was something that she was able to control when everything else was uncontrollable.

“I ended up finishing my freshman year. I missed going to regionals by maybe a couple tenths, and that was when I first realized that I had a shot at placing, maybe even advancing to regionals or state, so that summer I told my coach I wanted to be good. I wanted to win,” said Koza.

Koza returned to the gym and put in a lot of time and energy. She continued working and made it to state in her sophomore year. This was Koza’s defining moment. She had the realization that her work and all the sacrifices she’d made for the sport were paying off. During her junior and senior years, Koza continued to work hard and progress in gymnastics, making it to state again before retiring her leotards.

Although gymnastics may seem like scores and winning is the only thing that matters, that is entirely untrue. Gymnastics was an escape for Koza. It was something she could pour her heart and soul into and get away from the craziness of reality.

Koza’s relation to MCHS extends beyond her time as a student. As the Spanish III and IV teacher, she continues to be a part of the MCHS family.

“I didn’t really like Spanish. My freshman and sophomore year, it wasn’t my favorite subject, and I actually was trying really hard to switch to French. My counselor and a couple other teachers in the building convinced me to stick with it. They were like, ‘Well, there is somebody new coming in that sounds like they’re really excited to be a teacher, so maybe just give it a shot,’” said Koza.

In Koza’s Spanish III class, she came to the realization that Spanish was so much more than just learning vocabulary. She then decided there that she was going to become a Spanish teacher.

She felt the urge to submerge herself in Spanish and attended Indiana University (IU), where she took Spanish classes and worked hard in order to achieve her goal of becoming a teacher. She was driven by the challenge of learning an entirely new language. Koza threw herself into Spanish when she went to Spain for a semester, challenging herself in ways she had never anticipated. Now she is the resident Spanish III and IV teacher at MCHS, where she continues to be challenged by her students.

Kozas experience as a student athlete has impacted her way of teaching. She learned how important it was to be understanding of her students and their situations.

“The majority of my students do something outside of school, whether it’s work, clubs, or sports. I think being such a dedicated gymnast has allowed me to better understand my students and better sympathize with them when they have late nights or lots of practice. I also think that it's helped me to understand that, when things get difficult, you can’t just quit,” said Koza.

Senior year can be draining. After constant work, focus, and determination during junior year, students often struggle staying motivated. Garrett Baldwin, a senior at MCHS, has a very different outlook on staying motivated than most.

Being a senior in high school, Baldwin is looking forward to what comes after he leaves MCHS. This idea has caused Baldwin to shift his mindset and zone in.

A student's success can only sometimes be measured in the teacher's ability to understand a student's circumstances as well their ability to develop the students strengths and nurture their weaknesses.

“The teacher has to be very understanding and transparent with their students. I feel like everyone should be learning the same thing and stay on the same page,” said Baldwin.

Baldwin understands the importance of academic success in relation to athletic talent. His hopes of playing college soccer have driven him to succeed academically so that he will not be holding himself back.

“For me, it just took college soccer to focus on things and get a grip on life, stay committed to what I love,” said Baldwin.

From freshman year to senior year Baldwin noticed a sizable difference in his attitude. As a freshman, Baldwin never anticipated having the opportunity to play college soccer. Through much hard work and dedication Baldwin committed himself to the sport and continues to improve.

Aside from athletics, Baldwin originally planned to major in physical education, but has more recently been exploring majoring in early education. His inspiration for wanting to be a teacher is out of the goodness of his heart and his hope to help others.

“My mom’s a teacher, and I just like helping younger people in general. I like helping them learn and inspiring them to be better,” said Baldwin.

Baldwin urges others to understand the importance of their freshman and sophomore year. It's those years that set you up for the future as a junior and senior. Although during senior year motivation can be hard to come by, Baldwin pushes through and does whatever it takes to be successful.