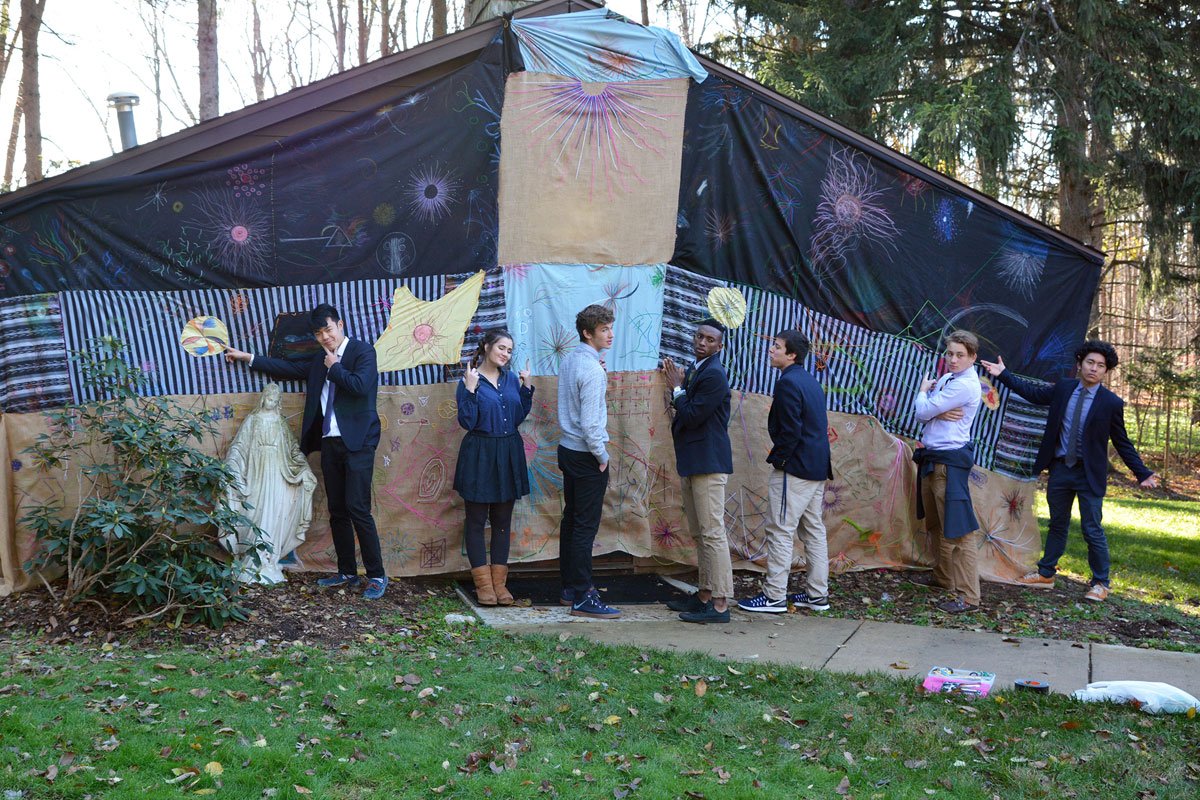 The Arts Take Center Stage
On December 5th, the sweet sounds of guitars, flutes, and pianos rang out across the frosted campus of La Lumiere School. The annual holiday concert was in session, playing twice that evening with performances at 4 p.m. and 6:30 p.m. The La Lumiere Choir sang traditional Christmas carols such as “Carol of the Bells” and “Christmas.” They were assisted by La Lumiere’s jazz ensemble, whom also had notable solos such as “Blue Christmas.” The students had been practicing for weeks and did an amazing job at bringing holiday cheer to campus. Afterwards, Christmas cookies and hot chocolate were offered in the Student Center.

3-D art students unveiled what they had been working on for the semester to the rest of the school this December. In a stunning visual display, the students wrapped the Chapel for their project titled “Quantum Threads.” Many hours of labor were put into this stunning piece including traveling to the Fermilab with the physics students to observe photos of particles colliding with each other in a particle accelerator. The students then replicated those images of colliding particles on pieces of fabric, which they stitched together to create the quilt they used to wrap the Chapel. The project was inspired by artists Christo and Jeanne-Claude. 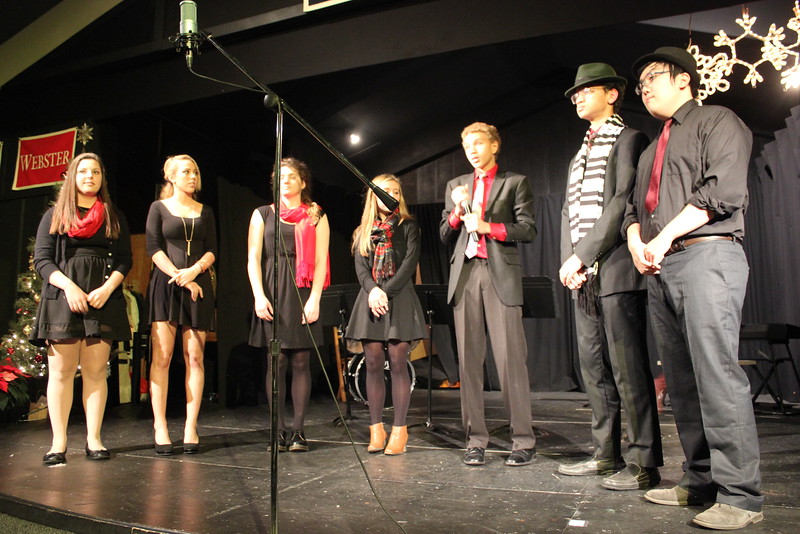 Finals Week vs La Lumiere Students
Finals week has started on La Lumiere’s campus Thursday, December 15th. The students are adequately prepared, having reviewed intensely the week prior during Dead Week. Multiple reminders to study and stay positive were said throughout the week, and the freshmen especially were given tips and advice. With the finish line in sight, many are determined to end the year strong.

Students paused their studies Thursday evening to either tune in or drive down to Varsity White’s game against former state champions New Albany High School. The game was held in New Castle, Indiana at the largest high school gym in the state. It aired live on ESPN, and it was a lively, enjoyable game. La Lumiere won 85-63. The game against New Albany is just the tip of the iceberg for impressive wins for La Lumiere sports this December. The girls varsity team beat Chicago Latin 40-34, and boys varsity blue beat South Bend Trinity 80-76. 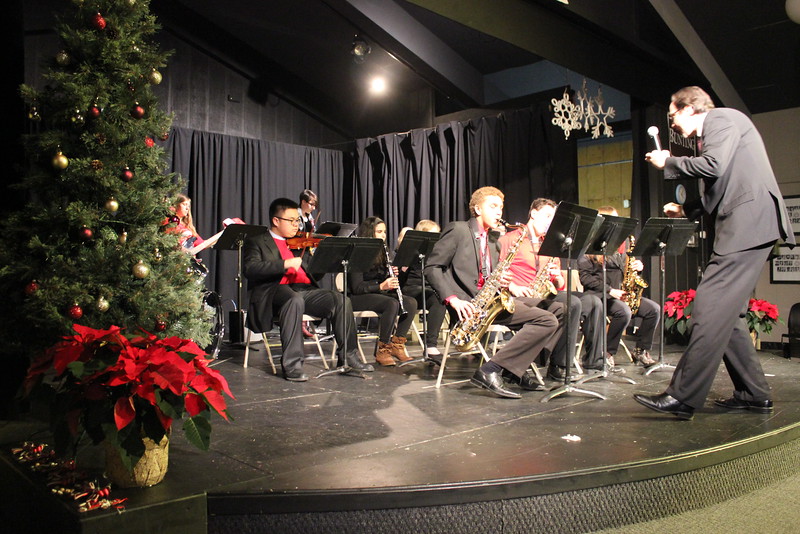 Winterfest was announced this past week and is set to begin when students return on January 9th. Winterfest is a way to break up the boring winter with fun activities and theme days. So far, a ski trip and tubing expedition is planned. 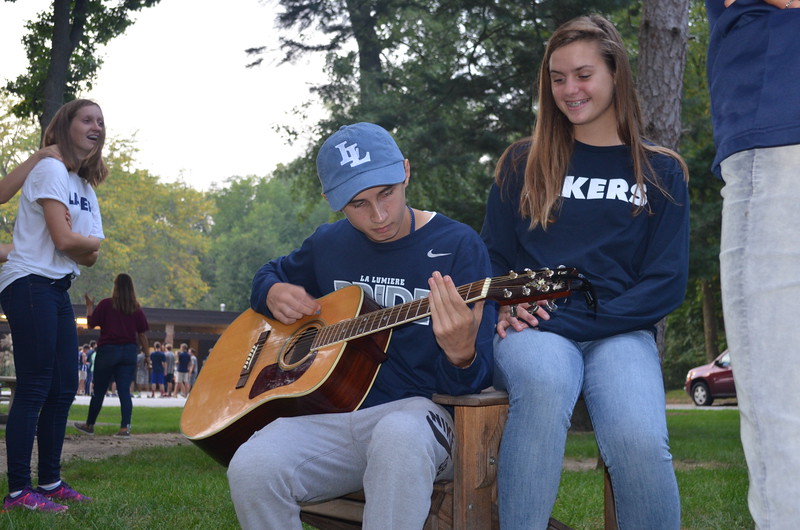 Student Spotlight: Connor Fife
Not many freshmen have the courage to stand up in front of the entire school and sing a Christmas and Elvis classic, but that is just what Connor Fife did all while playing the electric guitar.

“I started playing guitar about a year and a half ago,” said Connor. “I taught myself.”

Besides being a self-taught musician, Connor is also involved in many activities at La Lumiere. In the fall, Connor managed girls soccer and now plays on the boys JV basketball team. He is an avid member of Jewish Club as well.

For Connor, the most exciting thing about performing at the Christmas Concert was singing and playing an Elvis song. He was unsure that students even knew Elvis sang “Blue Christmas,” or if they had ever even heard an Elvis song before. To be able to combine classic with Christmas was the perfect recipe for Connor.

“In the long run, my dream is to tour around the world, first the U.S. and then hopefully [my music] will make an impact on the rest of the world,” said Connor. As his hand moved frantically along the guitar, delivering an astonishing solo, everyone was silent knowing they were witnessing poetry in motion. There was not a doubt in the room that one day Connor will achieve his dream. 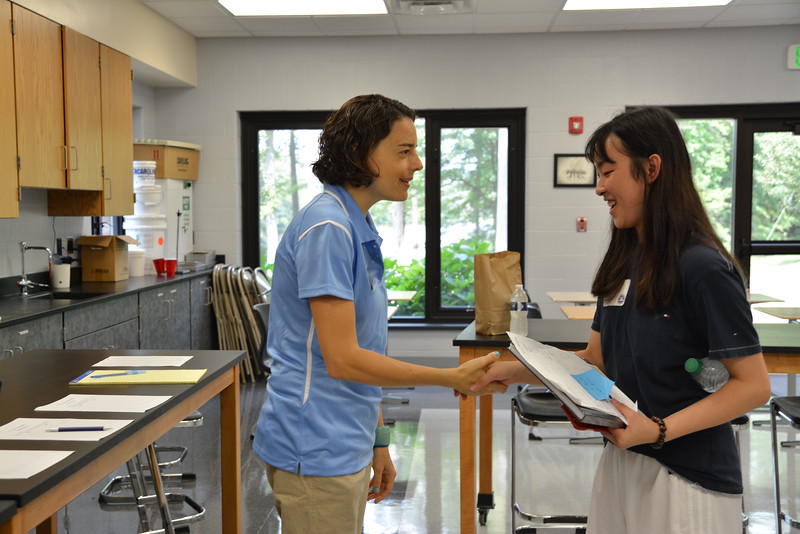 Teacher Spotlight: Katie Wall
Art and science are words that rarely appear in the same sentence together. Artistically speaking, science is too restricting when it comes to the creative mind. Scientifically speaking, there is no time to be creative when you must follow a strict set of guidelines to have an experiment be successful. Or at least, that is the general consensus on two. Katie Wall, the new art teacher for La Lumiere, sought to challenge and break down the stereotype that art and science could never intermingle in a project with her 3D art students titled “Quantum Threads”.

“I was inspired to introduce this project "Quantum Threads" in 3D art because I am fascinated by the relationship between art and science. The 3D art group studied Contemporary Art, Fiber Art, Installations, and Quantum Theory, and then we took a look at how both science and art rely on each other to help humanity understand the universe,” said Wall.

The project was a multi-media fiber art installation involving a study in quantum theory and contemporary art. It involved discussion, sewing, drawing, and writing. Each student contributed their pieces which were then sewn together to create one large piece of fabric. This fabric was then wrapped around the chapel.

“The things that have been rewarding to me so far as the La Lumiere art teacher is exploring the world of creativity with the students here. The learning environment is very rich and diverse. I enjoy examining and developing ideas as well as connecting with the students through their individual artistic processes. I look forward to continuing to develop this process through more Fine Art Fridays and Gallery events.”

Fine Art Fridays are a way for the fine art students to showcase their work to the public. They are held every Friday complemented with snacks and drinks. An open mic is held so musical guests may show off their talent as well.