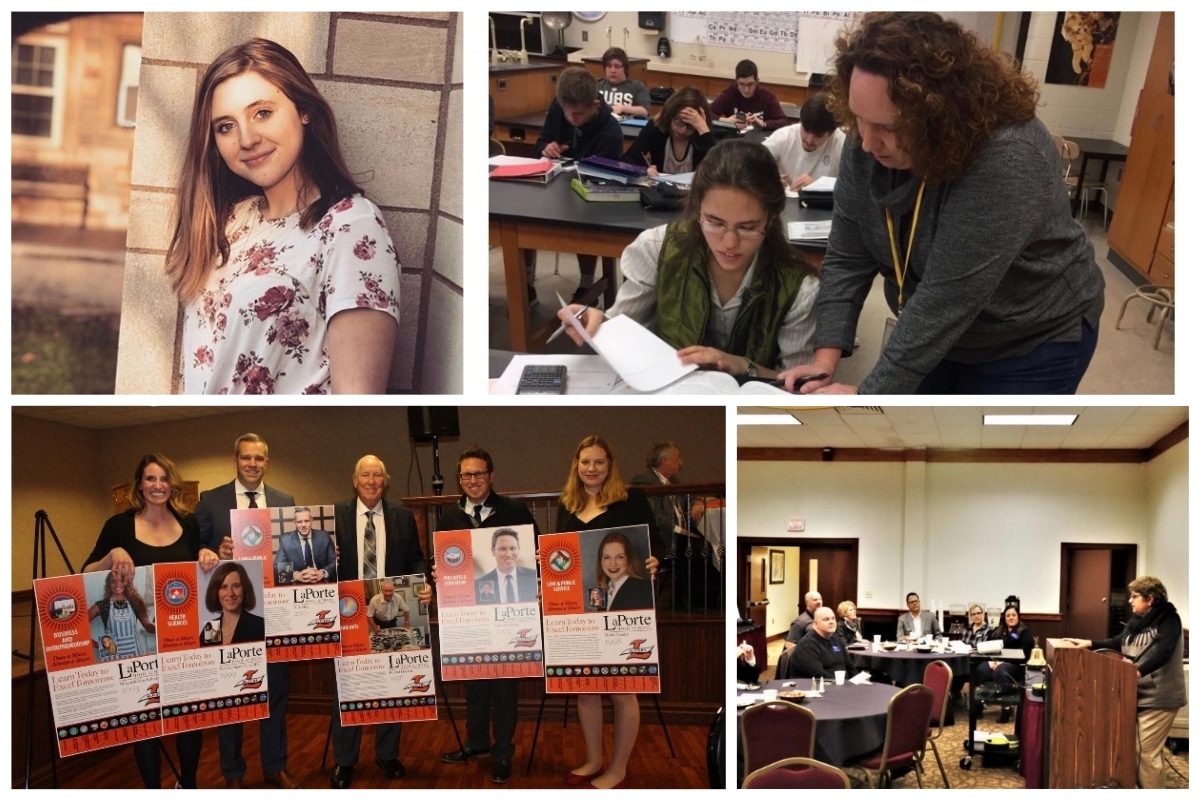 Students at La Porte High School are found participating in several sports throughout the school year, but only some can say that they focus on their activities year-round. Kennedy Phelps, LPHS freshman, is one of La Porte’s Varsity bowlers, and she is a fine one at that.

Phelps is a bowler for the girl’s bowling team at the high school, and she has already shown proof that she is serious about her game. Kennedy is often found dedicating nearly all free time to improving her game, both physically and mentally.

Starting varsity as a freshman is not something that all are able to say. Phelps competed as a Junior Varsity member of the LPHS team during her 8th grade year, and coaches were instantly impressed with her talent and sportsmanship.

“I was beyond happy to finally get a chance to show that I have the talent to be on Varsity as a freshman,” Phelps said.

Phelps has also recently decided to take her game to the next level, beginning competing in larger scholarship tournaments. The Northwest Indiana Junior Tournament Players Association or NWIJTPA, is one of the most recognized tournament associations in Indiana, hosts monthly tournaments throughout the Region. Tournament conditions are tricky, with tougher patterns help bowlers learn to adjust to different setups they may face in the future.

“I was super excited to find out that I would be starting bigger tournaments. They give me a chance to get the feel of what the tournaments and lane conditions will be like when I go to college,” Phelps said.

As Phelps takes her talent to the next level, LPHS is excited to watch her talent soar for her next few years.

Mrs. Owens, LPHS’s physics teacher, is not just an ordinary educator; recently leading the 2019 Science Olympiad team to state and continuing her focus on preparing students for upcoming exams, she stands far above the title of “teacher.”

Owens began teaching over 20 years ago, but she came to LPHS in 2008 after spending time at Eastbrook Junior High School and Oregon-Davis Junior/Senior High School. Owens has taught many science classes, from Earth Science to AP physics throughout her career.

“I have taught many different science classes. I love teaching science and showing students how the world works,” Owens said.

Owens has always been interested in the study of science. She loves watching students reactions as they learn something new or experience an exciting demonstration.

“My favorite thing about teaching is the students. I love spending my day with all types of students, hearing their stories and jokes, helping them grow and learn. Students make each day different and enjoyable,” Owens said.

The admiration between Owens and her students is not one-sided. Students have found her classroom to be an escape into comfort.

“She’s great at teaching and is obviously so passionate about it. She’s always willing to help the struggling students,” said Genevieve Tucker, a junior at LPHS.

Even as some students can find Physics to be a difficult topic to study, the love and appreciation for Owens from her students is undeniable.

What Has Been Happening?

Students at La Porte High School have been given the opportunity to attend weekly meetings of the Rotary Club of La Porte.

Rotary consists of members from different countries, continents, and cultures. They are able to come together and build friendships and connections while creating ways to make a difference in the world.

Located in La Porte, the Rotary Club holds Monday meetings at 11:45 a.m in the Conference Center of Best Western. Selected students of LPHS are able to attend meetings in which they listen to a speaker and enjoy a lunch provided for them. Students also have the opportunity to introduce themselves and share information about their role as a club member at LPHS, bridging the school-community gap.

“The Rotary Club allows community members to see what is happening in classes at the high school. The meetings are a great opportunity for students,” Maddie Bildhauser, senior, said.

Rotary meetings are not only great opportunities for members to hear about what is going on at the high school, but it’s also an excellent chance for students to hear about experiences of those in the community who have made differences.

“I learned a lot at the meeting I attended, and I am so grateful for the opportunity I had,” Bildhauser said.

Selected students will be given opportunities to continue attending Rotary Club meetings as the year goes on.

The La Porte High School Learn Today to Excel Tomorrow banquet will be taking place on April 11th at the Silver Palace in La Porte, Indiana.

Each year, the top 10% of seniors are invited to attend a banquet held to recognize their outstanding academic achievement as well as honor a guest educator they choose to bring with them. Attendees dress up and are provided a meal funded by the Rotary Club of La Porte.

Seniors in the top 10% select a current or former educator who they feel have made a difference in their education or life in general and escort them to the annual banquet. Selected students also give a speech and present their selected educator with a gift, often handmade, which they feel honors their guest.

Being a part of the top 10% is a true honor for all students. For many students, being in the “top ten” is a goal they have had since freshman year.

Seeing as previous years have been memorable nights for all students, this year is planned to be nothing less.