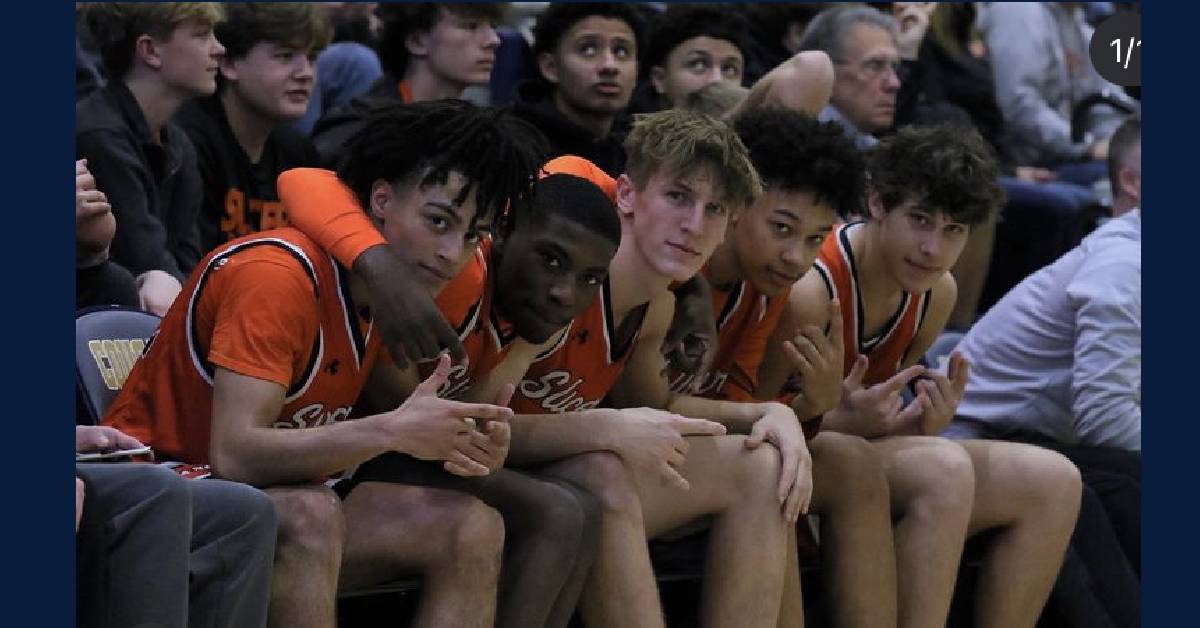 Lake Central won the tournament against La Porte in the championship game.

LPHS Junior Rylan Kieszkowski has become a key player on the roster and played an important role in the Slicers reaching the championship with impressive play on both sides of the court.

“We played solid the whole tournament. I feel like we are getting better, and the tournament brought us more together because we spent a lot of our time over Christmas being with each other,” Kieszkowski said.

In other news, LPHS has a bandit on the loose. Not just any bandit, however, but a sticky note bandit.

Scattered all over the halls on Friday, January 13, motivational sticky notes were scattered throughout the entire school.

No matter where you were in the school, a sticky note was there.

They were found on walls, lockers, tables, water fountains, and even the ceiling.

The annual LPHS variety show is coming up. On February 3, different performers will show their acts. It is at 7 p.m. at the Performing Arts Center (PAC).

The Variety Show at LPHS dates all the way back to at least 1999.

The Master of Ceremonies this year are Brenda Cooper and Erin Parker.

Auditions this year are taking place at the PAC on Wednesday, January 18. Students will perform their act in front of the music department.

Based on the turnouts from the recent years, there are predicted to be around 12 groups and 30 students.

The Variety Show is run by the music department, but they get help from PAC Director Morgan Hanson and Dance Teacher Jessica Tenbusch. The music department teachers are Joe Clark, Elizabeth Cravens, and Thomas Coe.

LPHS also has staff who perform for the show, but no one knows who those will be yet.

“I am hoping that Scott Upp will recite some poetry. I think it would bring smiles to a lot of the students,” Teacher Matthew Sullivan said.

Depending on the amount of performances, the show usually takes 45 minutes to an hour.

Additionally, there is a $5 cash fee at the door for those who wish to watch.

English Teacher Jennifer Scanlin is truly a shooting star in a galaxy. She is always on the move with creative and innovative ideas to keep her classroom exciting.

Scanlin has always had a feeling that she wanted to become a teacher. She loves her mugs that say “World’s Best Teacher," and Scanlin was always playing school with her cousins and fighting over who got to be the teacher.

Her parents noticed her love of teaching and bought her a blackboard with chalk. They set it up in the laundry room and she taught her invisible students almost everyday.

Although she knew she wanted to be a teacher, she didn’t know what she wanted to teach. She tried her hand at math and elementary education and additionally considered science and history, but English seemed like it offered the most possibilities to be creative.

While she likes to call herself self-taught, she went to college in many places. Her college journey was rather adventurous.

She started at the University of Illinois at Chicago. Next, she downsized to a smaller college - Moraine Valley Community College.

Though Scanlin is a teacher, she feels that her students are teachers as well. They teach her new things everyday such as how to do the Dougie and how to take a screenshot.

Interacting with her students has become a highlight of her day.

“I love my job. I love coming to work. I love interacting with students, and I long for the days when the cafeteria made slightly underbaked chocolate chip cookies. Please do something to bring those back,” Scanlin said.

She has been teaching for 21 years, and she can’t wait to create and learn new things in the years to come.

Scanlin’s happy place is under the stars and at the lake. She is comforted by the sound of the waves crashing and the feel of the water.

In her free time she is spent beach walking, traveling with family, taking late night back road drives, letter writing, painting with watercolor, and boating.

Currently Scanlin’s favorite book is "Daisy Jones and the Six" by Taylor Jenkins Reid. Other favorites include "Sleepers" by Lorenzo Carcaterra and "To Kill a Mockingbird" by Harper Lee.

One interesting fact about Scanlin is that she applied to work for the railroad and made it to the final interview before getting cut.

Additionally, Scanlin took a six year break from college with less than a semester to go in order to care for her grandfather. During that time, she started her own sign business.

If Scanlin could go anywhere in the world it would be to the North Pole to check out Santa's operation and maybe apply to be an elf after she retires from teaching.

She’d also love to scuba dive in Hawaii, go white water rafting out west or on the east coast, travel to Alaska to see the Northern Lights, and even go on safari in Africa.

“If I could have any superpower it would be time travel. I'd love to have lunch again with my grandpa, or spend hours talking with my mom over a huge plate of cheese nachos, or see what the future holds," she said.

LPHS Senior Kyah Sturm is a student who is involved across various clubs and extracurriculars.

She is involved in the Quiz Bowl and the Photo Club as well as holding the role of vice president of Creative Writing Club.

She is a college hopeful and has dreams of landing in Purdue University. She is undecided on her major.

In her free time, Sturm enjoys being creative and spending time writing or with her friends. She also listens to and plays music.

Like many people at her age, high school is a major part of her life. The effects of her high school experiences have not quite set in for her yet.

“I think high school is my life right now. I’m not sure I’ll really notice how much it shaped me until I leave it. I can say that being around so many different types of people has definitely helped me learn more about my personality,” Sturm said.

She has grown greatly as a person in her four years of high school. From her freshman year, she has improved her ability to cope with her mental health, which is an important skill for her present and future.

She has also gotten into new things and has changed up her style to her enjoyment. All of this has led her to become more comfortable with the person she is.

In Sturm’s free time she can be found writing, listening to music and hanging out with her friends. She has her happy place in her home where she can relax and decompress.

Due to her being a very busy person, Sturm has had to learn to keep school as the top priority in all of her endeavors.

She has learned to let herself catch breaks and realized that every second does not have to be spent on the future.

“Just breathe. I promise it gets better,” Sturm said.