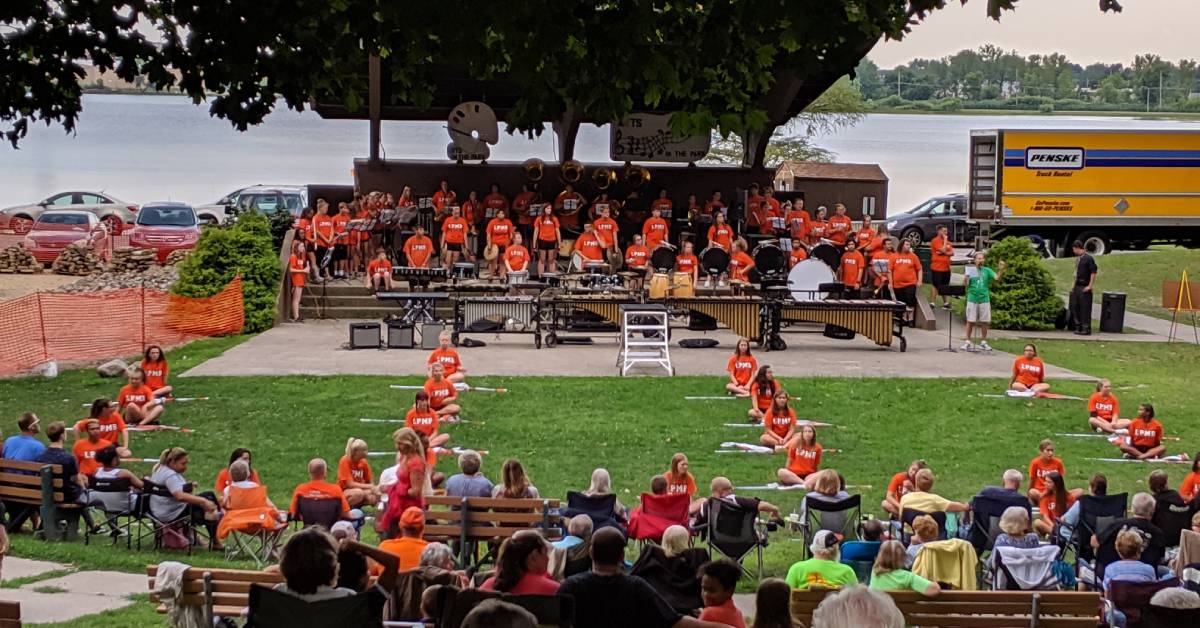 Arts in the Park

On Wednesday, August 14, La Porte’s very own Arts in the Park held their annual concert with the La Porte Marching band.

The concert began at 6:00 in the evening and, as always, it was a hit.

The concert consisted of five popular songs and the band ended the night with their ritual rousing rendition of the school song, “Fanfare and Our Old High.”

The audience was able to enjoy a nice breeze and, to make the night even better, there were a few stands that sold food and drinks.

The band appreciated all of the support from the families and community who came out to watch the concert.

The LPMB will be performing at an ice cream social at the Emerging Sound on Michigan Avenue in La Porte at 2:30 p.m. on Saturday, August 17th.

Someone Interesting in the community

Taking over his first teaching job, Joe Clark has already made a huge difference in the La Porte High School’s music department.

Clark made his first impressions as the brand new director June when he started his first adventure at LPHS, on the marching band field.

His love for music started when he was a child. He grew up an hour outside of Boston, Massachusetts, in the small town of Pepperell, MA.

Clark attended North Middlesex Regional High School in Townsend, Massachusetts, but when it came time for post secondary school, he left his home state and headed for the “Big apple.”

He went to Eastman School of Music and the University of Rochester for his undergraduate studies. Clark was thrilled to have been accepted to both the colleges, but something stuck out more with Eastman.

“Eastman was particularly attractive to me because several of their faculty members developed the Music Learning Theory inspired method books that I had started learning on in fourth grade.” Clark said.

In addition to attending both schools, Clark also attended the University of Illinois Urbana-Champaign where he studied wind conducting.

As the music lover that Clark is, music education and clarinet performance were his two undergraduate majors. However, he also decided to stick to mathematics, just in case something fell through in the music world. Thankfully, it didn’t.

From the very beginning of his life, he remembers always wanting to help people. He realized in middle school that teaching was what he wanted to pursue. He just wasn’t quite sure what he was going to teach.

Since that moment, Clark went for it and never looked back.

After applying for several band director positions, Clark didn’t have any experiences quite like his interviews with La Porte.

“The fact that the interview committee was made up of the principal, the high school music department, and the president of the La Porte Music Club was a very good sign to me that La Porte takes its music program seriously,,” Clark said.

As Clark is slowly becoming acquainted with students and truly experiencing the real feeling of being a band director at LPHS, he has enjoyed an immense amount of moments so far.

“Getting to work with the marching band during parade camp and band camp has made me extremely excited to be here,” Clark said. “While they are good musicians, they are also good human beings.”

The La Porte Music Department is thrilled to have such a caring individual like Clark in his new role, and they are genuinely excited for all of the wonderful music and memories that are going to be made.

Something coming up in my hometown

As school is starting for most, and the weather is starting to break, one of the most fun times of the year for LPHS Slicers is upon us: football season.

The first football game will be August 23rd starting at 8:00 p.m.

The La Porte Slicers football team will be playing against a close opponent, New Prairie.

As always, the first game for the Slicers is at their very own Kiwanis Football Stadium in La Porte. In addition to the game, the LPHS cheerleaders, and the La Porte Marching Band will be there to cheer them on.

The team and coaches hope to see everyone there to support the team.