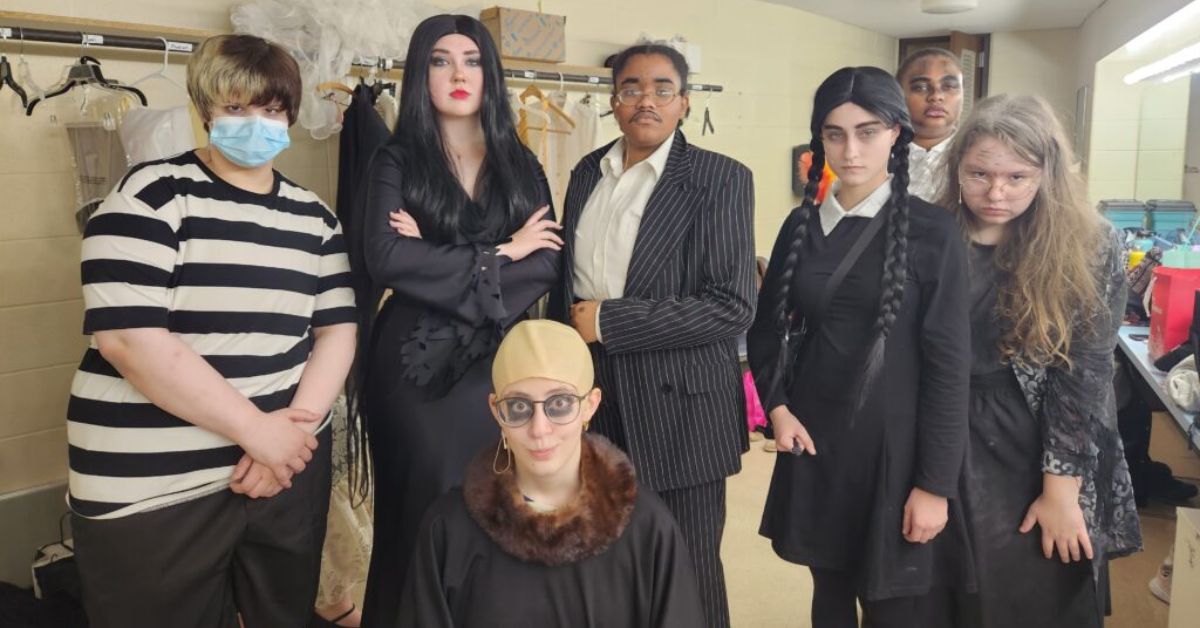 Michigan City High School (MCHS) Drama Club performed “The Addams Family” during the first weekend of December. They had three performances; Friday and Saturday, both at 7 p.m., and Sunday, December 4 at 2 p.m.

The cast was led by Emporess Vickers, who played Gomez, and Ashley Sparks, who played Morticia. The two lead the audience, alongside their accompanying cast members, through a story highlighting love, family, and being true to yourself.

The story of the show follows Gomez through a two-sided problem; his daughter Wednesday’s recent engagement and request to keep it a secret, and the promise he made to Morticia to tell her everything. He must discover how to be true to both his love for his wife and his love for his daughter without tearing the family apart. On top of it all, Wednesday’s fiance and his family are coming over for dinner.

The cast themselves were directed by a team new to the Drama Club. They were headed by Becky Tiedeman, who did most of the stage work with the kids, giving notes from day to day and working on the staging.

Joining Tiedeman was Kristy Steinheiser, who worked on the backstage elements, such as building sets, moving them, creating the props, and working on the background details that brought the show to life.

Next on the team was Angela Gresham, who worked on getting the show out to the audience. She headed fundraising, ticket sales, and advertising throughout the process.

Finally, the team was completed by Kaity Mosher, who vocally directed the show, and made the music stage worthy.

The directing team and students began work on this show with the auditions, which were in early October. Once the show was casted, the whole group started working hard.

In previous years, the Drama Club has had since early September to work on the fall show. Due to unforeseen circumstances, they were forced to start much later this year, making every rehearsal incredibly important. Still, they pulled it together, and the crew is overall happy with their run.

As is tradition for MCHS’s Drama Club, they intend to put on a straight play this spring. For those unfamiliar, this is a show without music or dance, just lines.

While the show remains undecided, auditions are likely to be held soon after Winter Break's conclusion, and the show itself will most likely be performed in April or May.

The Drama Club is also involved with an organization known as Centerstage Youth Theatre, a group known for shows specifically made for youth actors aged seven to 14.

High school age students are hardly excluded from this opportunity, however. Students from the high school can participate through student directing opportunities, stage managing positions, and set building services.

Overall, the Michigan City High School Drama Club is far from done this year. Students look forward to the opportunities offered for the rest of the year.

Becky Tiedeman is one of the members of the directorial team of the MCHS Drama Club, but her experience with theatre goes back over twenty years.

“My son was in theatre at Elston, and I started helping out with sets, and I went from there,” Tiedeman said.

It didn't take long for Tiedeman to find her speciality: directing.

“The first show I ever directed was ‘Snow White and the Seven Dwarves’ at Coolspring Elementary, where I started the Drama Club,” Tiedeman said.

Tiedeman, alongside the rest of the directorial team, made their debut with the MCHS company during “The Addams Family.”

“The high school program was in need of a director and sponsors for the drama club, and since we had already been working with them with Centerstage, it just felt natural to step in and save it,” Tiedeman said.

Seeing as Tiedeman’s wheelhouse mostly included working with kids of Centerstage’s younger age group, the MCHS’s Drama Club was a very different experience for her.

“The biggest difference is, when you’re dealing with the little kids, they do not have a lot of life experience to draw from because they’re only seven years old. By this time, they have what they’ve experienced in life to be able to pull into their character,” Tiedeman said.

Tiedeman went on to discuss the production of “The Addams Family” and how it came to be.

“It wasn’t my first choice,” Tiedeman said. “It was the Drama Club students’ first choice. I thought ‘The Addams Family’ would be a fun show. I really didn’t see myself doing it until they went with that as their choice. Then, it started to feel like this could really be something cute.”

Despite starting to see the possibilities the show had to offer, Tiedeman still held onto some reservations at first.

“I felt very nervous doing the show because we basically had a month less than what we normally would have to prepare. That made me very very nervous, but I was told, ‘These are high school kids, and they will be much easier to direct. They’ll pick things up quicker. It’s going to be fine.’ It proved to be, but we cut it down to the wire,” Tiedeman said.

Tiedeman plans to return in the future, discussing the possibility of doing comedies or shows similar to “The Addams Family.”

“I’m open to pretty much anything because it shouldn’t just be doing things that I’m comfortable with and that I’ve done before. I’ve done a lot of shows, and we have repeated shows. I think down the line, I wouldn’t hesitate to repeat this show,” Tiedeman said.

Considering her involvement with the MCHS theatre program was an unexpected one, Tiedeman hopes to leave behind her mark on the program.

Emporess Vickers is a fifteen-year-old freshman who recently played the leading role of Gomez in the Drama Club’s production of “The Addams Family,” but her experience goes back to the beginning of the year, when she joined her first production.

“My first show was two or three years back when we did the production of ‘Frozen,’ and that took a long time because it got stopped by Covid. So, I guess my theater experience goes longer than when I actually started theater,” Vickers said.

Vickers began with “Frozen,” which, while being casted in March of 2020, was actually performed in January of 2022. She played a villager as well as a troll.

“After that, I was in ‘Descendants,’ and now I’m here. This is actually only my third role,” Vickers said.

“Descendants” highlighted Vickers in her first lead role as Jay. During that first weekend in December, in her first high school production, she joined the cast of “The Addams Family” as its leading character.

“I really liked the personality of Gomez because he has his own serious things, but there’s also a lot of areas where you can bring your own personality into it, and I like roles with a little wiggle room,” Vickers said.

Gomez is a character with a lot of interesting portrayals across stage and screen. For some, this would be intimidating, but Vickers had complete confidence when shooting for the role.

“I was very passionate about Gomez. I remember for the first audition sheet when I filled out for my top three roles, I filled out Gomez as my number one, number two, and number three. So, I was very dead set on Gomez because I had watched the production so many times before we even announced that we were doing the show, and I just loved ‘Addams Family’ before we even got to do ‘Addams Family,’” Vickers said.

A big part of the rehearsal process is coming into your role, and realizing why you were cast in it.

“I could not imagine doing anything else other than Gomez. And I think everyone fits their roles so well,” Vickers said.

Being a freshman, Vickers has many more shows to come.

“I look forward most to seeing the new talent that comes in with the years because I know that I’m with a lot of people that are seniors, and they are super talented, so I’m curious to see how the dynamics of the theater will change once there’s new people,” Vickers said.

Make sure to look out for her going forward, because Emporess Vickers is just one of the many rising stars available to see perform in the Michigan City High School Drama Club.