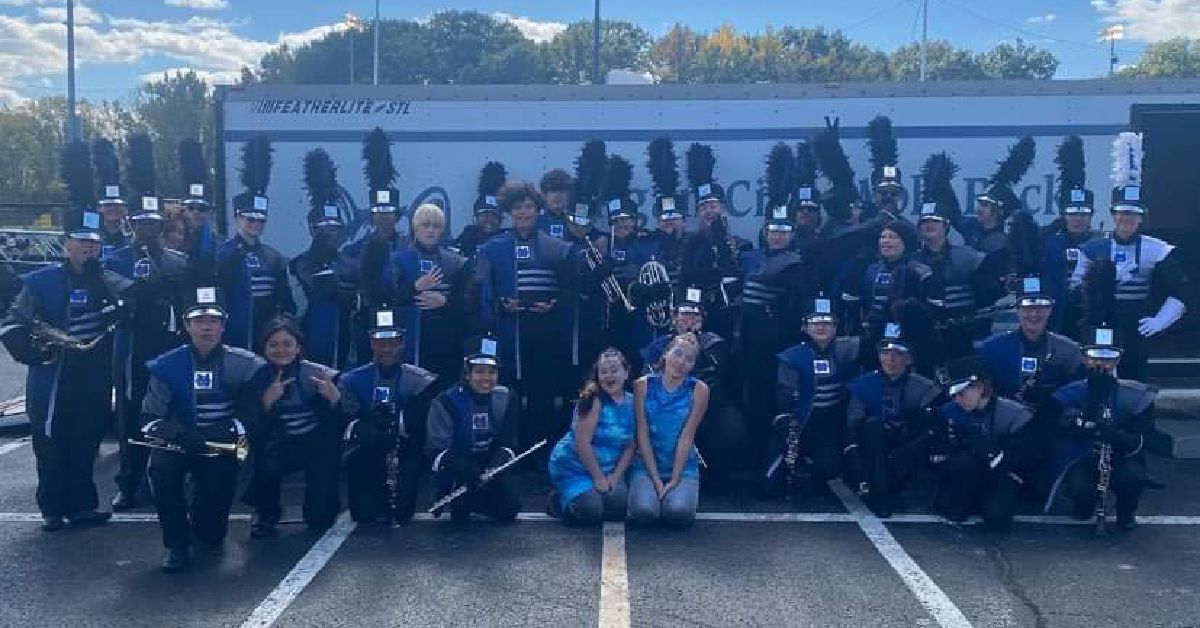 Michigan City’s Wolfpack Pride Marching Band closed its season on Friday, October 14, with its Senior Night at the final home football game of the Michigan City Wolves season. Seniors Emray David, Bryannah Hardesty, Zachary Hogan, Alaina Kotaska, Kyra Krachinski, and Rylee Palm were recognized for their time with the band over the past four years.

This ending comes following a long and full season that began in early March, when the band began rehearsals on its show, "Frost." "Frost" consists of three movements, and includes arrangements entitled "Winter Dances" and "Sadness and Sorrows."

Rehearsals continued throughout the year and into the summer, where the group participated in band camp and worked long days to prepare its show for the start of competition and football season.

As the 2022-2023 school year began, the band started preparations for the five judged competitions it would participate in this year. Most recently, the group performed in the Indiana State School Music Association’s (ISSMA) Scholastic Class Preliminary Competition in Chesterton, where the group competed against marching bands from La Porte, Chesterton, Portage, and John Adams. Michigan City received a silver rating, successfully closing out its competitive season.

This shows incredible success and improvement for the Wolfpack Pride Band, who proudly share that this was its first year in Scholastic Class A competition, a more difficult performance class than the band has ever performed in before, and has scored higher overall this year than in the past.

The Wolfpack Pride does not only perform for competition. It has also performed during halftime at every home game the Michigan City Wolves Football Team has played this school year.

All in all, the Wolfpack Pride Marching Band had an incredibly successful season, but the students are far from done performing in the upcoming months.

Wolfpack Pride students have a lot to look forward to in the upcoming months, even with the marching band season having come to a close.

Performances for both events are in late November.

ISSMA All-State auditions are also coming up, which hard-working Wolfpack Pride students will be attending. If students are accepted, they will perform in January with the top band students in all of Indiana, an incredible honor several students are hoping to either achieve or repeat.

Perhaps most exciting of all, Wolfpack Pride will be going to Orlando, Florida this spring break to perform at the Magic Kingdom, attending a trip to Disney World itself, alongside many events they will perform while there.

Not only will they perform in the Magic Kingdom’s parade, the band will also have the honor of performing an original piece of music from a Disney movie. The group will be given the original sheet music, recorded as the band performs, and have their performance played over the movie for the whole band to see.

While football season is over, the Wolfpack Pride Marching Band is far from done for the year. Wolfpack Pride thanks anyone who has attended any of its performances this year, as well as anyone who plans to attend other events they will be participating in for the rest of the school year.

Angela Gresham is a science teacher at Michigan City High School (MCHS), and has been for 20 years now. She teaches several classes, including freshman level biology and anatomy and physiology. Through all the classes she teaches, her favorite is Advanced Placement (AP) Biology.

Students may find the science options at MCHS difficult to choose between, but Gresham boasts AP Biology and the wonderful opportunities and knowledge that come with it.

“AP Biology covers the same basic topics as the introductory biology course but in much more depth,” Gresham said. “Cell energy, cell communication, and cell differentiation is covered in detail, although these areas are barely introduced in Biology I. Statistics are also used in order to look at whether our data really supports or fails to support our hypotheses. The course also concentrates on experimental design and sharing results.”

Alongside substantial knowledge in the field of biology, AP Biology is known for its fascinating and complex labs that offer students insight into the subjects they are studying.

“My favorite lab is the firefly transformation lab," she said. "In this lab. We take the gene that makes fireflies glow and transform it to E.coli along with an antibiotic resistance gene. This makes the bacteria glow and also makes it not grow on petri dishes with the antibiotic.”

Gresham recommends the AP Biology course to any student interested, but she also highly recommends it for those who are interested in proceeding in science studies in their college career.

“Students that want to major in biology or science should take the AP Biology course. The high school also offers a dual credit course, which would earn students college credit, but it is not recommended for students wishing to pursue this field of knowledge in their future.”

Gresham looks forward to further years of teaching the subject she loves, and hopes more students will join her in the passion for it as the years come.

Ashley Sparks is a junior at MCHS who has participated in marching band for three years now. She is a multi-talented musician who participates across the board in musical activities at MCHS.

“I can play more than 10 instruments,” Sparks said. “My favorite instrument to play is the oboe.”

This marching band season, Sparks played the mellophone, but her range comes into play throughout the multiple music-related activities offered at MCHS.

“I am planning on auditioning for All-State Band,” Sparks said.

At this event, Sparks intends to audition with the oboe. She has additionally been accepted for District Band, an event where she will also be playing the oboe.

“I am most excited to perform in the All-District Honor Band as well as join my fellow band members in another year full of concert, jazz, and pep band," Sparks said.

Sparks is known for participating in music-related events outside of band activities.

Her wide-ranging activities include portraying Morticia in MCHS’s upcoming production of "Addams Family." As the marching band season closes, she looks forward to the future and outlook of the band programs as the years go by, urging students to consider marching band as an activity they might enjoy.

“I think that all students interested in marching band should try it out," she said. "Marching band is for anyone and everyone who is willing to put in the time and effort. Anyone interested in band at all should come out and give it a try! Even if they don’t really like it, there are many other musical activities like jazz and pep band.”

Sparks is an exemplary example of the talented and well-achieved students the music program helps to produce, and everything that they can accomplish with some motivation and hard work.