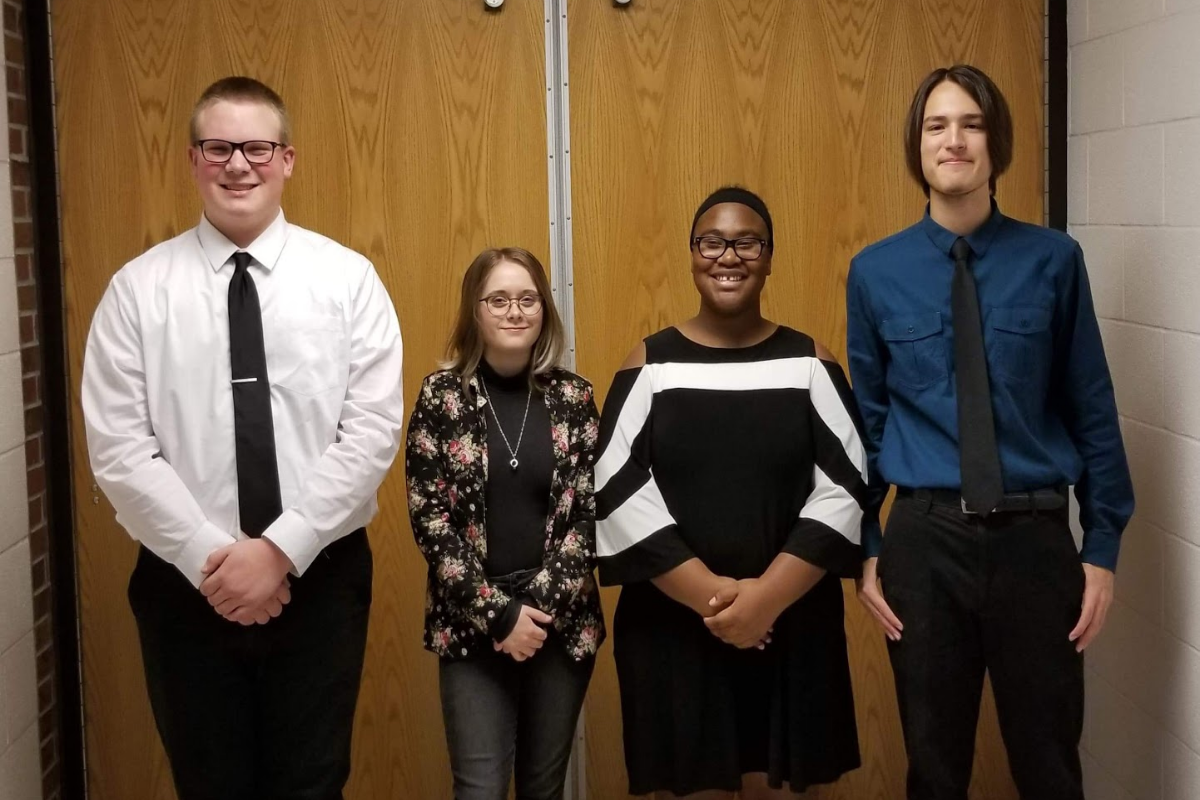 The Indiana Bandmasters Association hosted their annual all-district honor band last Sunday, November 18, and all-region band the week before. The organization chose from a pool of about 300 students, grades 9-12 for all-district.

The Indiana Bandmasters Association was founded in 1955. For the past 63 years, their goal is to better Indiana's bands by encouraging teamwork and increase students' musicality overall. This year's coordinator was David Elliot, and the host of the performing district was Nicholas Boserman. Out of less than half the applicants, five were chosen from Michigan City High School: Adam Howard, Mia Taylor, William Mansfield, Trinity Clayton, and Autumn Reynolds. Through the process, students were required to fill out an online form, giving information about their ISSMA accomplishments, chair-placement, and whether they took private lessons. Based on this and director recommendations, the best-fit students were chosen to perform.

Students were given the music to practice ahead of time, then were all brought together for a day-long practice and the performance the next day. This year, the ensemble played a mix of songs: "Brighton Beach,” "She Will Hang The Night With Stars,” "Kentucky 1800,” "Aria Di Chiesa,” and all three movements of "Foster’s America.“ Although challenging, the experience gave students an opportunity to interact with new musicians and learn under a new director.

All the students agreed the experience was interesting and helpful and will try out again next year, hoping to move to the All-State division. They enjoyed the challenge and advice given by the directors, and can't wait for more opportunities to perform.

Junior Adam Howard has been playing the trumpet since sixth grade and has excelled tremendously. He is involved in marching, pep, and jazz band, as well as the top band class, Wind Ensemble.

Landing multiple solos in all categories, Howard has been recognized for his musicianship and his ambition to always get better. He is loved and admired among his peers, becoming section leader and serving as a great role model, pushing others to always do their best while being kind and encouraging.

Howard has participated in his second year with the Indiana Bandmasters Association and loves the opportunity it gives him to see other teaching and playing styles. He hopes to participate again next year and even to try out for the prestigious all-state honor band.

Along with working well in groups, Howard was a gold-medalist for his ISSMA solo last year and hopes to do the same this year. He has chosen a tougher solo and loves putting in the extra effort, as well as taking lessons.

He hopes to continue on with music in college and possibly as a profession. He is eager to take the steps to do so.

This is Frank Gast's second year at Michigan City High School. With 13 years of past experience under his belt, Gast has brought much knowledge and many opportunities to the MCHS band department.

Starting in the classroom, Gast has implemented weekly playing tests as well as chair-placements and music analyzing. He challenges the different levels by giving them fitting music that highlights their strengths but makes them work on their weaknesses.

Before, students at MCHS didn't have the opportunity to apply for IBA honor bands. Last year, Gast heavily encouraged all students to apply. He also gives many opportunities for solos and other performances outside of the classroom.

So far this year, he brought the Wolfpack Marching Band to gold at ISSMA, as well as earning visual achievements, and color guard and auxiliary recognition. He also has brought many students to compete in the state-qualifying contest for ISSMA, as well as encouraged students to take private lessons to learn more outside the classroom.

Gast is the director the band department has needed for some time, and it is bound to excel under his instruction. Through thorough planning and determination, the band will become more talented and creative over time. The students love Gast and everything he's done for them.

Many things are happening with the MCHS Band Department. The biggest event of the year, One City One Sound, will take place on Thursday, December 6th at 7:00 p.m. The admission is free, but canned goods are encouraged. The event will combine band and choir from grades 6-12 at all skill levels.

Jazz band, in its second year of being an official, travelling club, will be starting up soon as well. Although small, the powerful ensemble will perform at its own concert, competition, and for other presented opportunities. The group encourages experienced students to try other instruments that fit a jazzy nature, as well as learn the complicated style of music for that genre.

As for Pep Band, the group will entertain the audience at both boys and girls varsity games before, during, and after. They include all instruments and skill levels and learn about 60 popular songs to play at the games

The band classes at the high school will all participate in the ISSMA full ensemble competition. Although there are three different bands, sorted by skill level, they all strive to achieve a gold rating in their divisions. Individuals from the department also are participating in individual solo and small ensemble competitions, working heavily outside the program and even getting lessons

For the first time, the Wolfpack Marching Band will be taking a trip to Orlando, Florida. The group will perform at Disney, as well as visit Universal Studios. The trip will take place during Spring Break of 2019, and will be six days long. The group is excited about the opportunity to show their skills to others outside of the state.