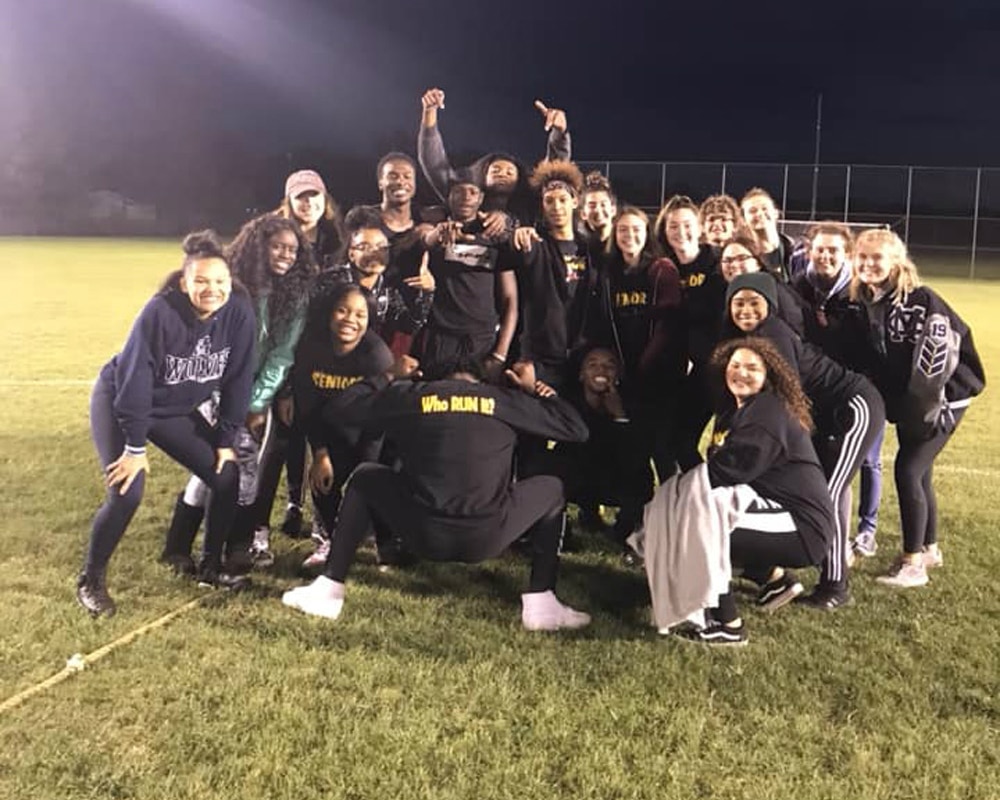 Earlier this month, Michigan City High School showed its spirit during the week of Homecoming. From spirit week to the class olympics to game night itself, the students represented their school through fun activities that everyone could be involved in.

Student council mapped out most of the week, especially the spirit days and assembly. The goal of the week was not only to feature the homecoming candidates, but to have the four classes compete for the Spirit Stick through various events.

Spirit week consisted of a new theme each day: pajama day, decades day, half and half day, celebrity day, and class color day. Each day, all students in spirit wear were counted and the numbers were tallied up between classes, factoring into which class had the most spirit.

Another event was class olympics. Each class teamed up to compete against each other in various games, including tug-of-war, ultimate frisbee, knockerball, and touch football. The seniors came out on top, winning for the night.

The pep rally took place at the end of the last day of spirit week. The Homecoming candidates were announced, the Wolvettes performed, then the classes competed through chants and crowd roller coasters.

Overall, the seniors won and were granted the Spirit Stick on Homecoming Night. For the class of 2019, this is the fourth year in a row, causing them to be the first class to win for all four years.

Homecoming night featured 19 candidates. Each had an escort, represented their club, and had information announced about themselves and future plans. After the candidates were announced, the winner was crowned by principal Candy VanBuskirk. This year, the Homecoming Queen was Meghan Miller.

Early College Club began during the beginning of Miller’s high school career, causing her to be one of the founding members. She has been president since her sophomore year and loves the club.

“Early College Club is a good thing to be a part of and has taught me much leadership and responsibility. Although it is small, we are all very good friends and strive to contribute to not only the club, but the overall program,” Miller said.

Millers’ plans for the future include attending Purdue Northwest to start her studies in elementary education. She will miss MCHS, but is grateful for all the opportunities and experiences the school has granted her.

“This high school has helped me find my path. It has shaped me into the person I am and what I will become.”

Catherine Lindgren is the sponsor of Early College Club at MCHS. She teaches world geography and is experienced and involved in the school and with her students.

Miller met Lindgren in her freshman year as a student in her class, starting her experience in Early College. Once the club started and she was elected president, the two have worked alongside each other to build the club up and plan events. Although she no longer has Lindgren as a teacher anymore, she still acts as a mentor.

“Mrs. Lindgren is a good influence and is overall really helpful with school stuff. She is always there to help me out in any of my classes and has helped me grow to be successful throughout high school,” Miller said.

The Early College program is a unique program, combining high school and college-level curriculum to give students a jump-start on their education. It allows students to graduate with up to 60 college credit hours and potentially receive an associates degree.

Alongside the program, a club has emerged to engage its students. Although relatively new, Early College Club has grown leaps and bounds, allowing the students to better their program and help out the school community overall.

The founding members of the club, including Miller, have been committed to building a good reputation and opportunities for those involved in the program. They plan fundraisers, volunteer opportunities, and ways to better their club. Last year, the club created and participated in a community service opportunity within the school. Members went to teacher’s rooms and helped clean out the teacher’s desks, rooms, and anything else that was needed.

“We liked what we did last year and hope to do it again along with actually going out into the community,” Miller said. “Our goal is to leave the club better than when we started. We really hope it grows and become more known among the community because it has such a positive impact on our school and the people in it.”