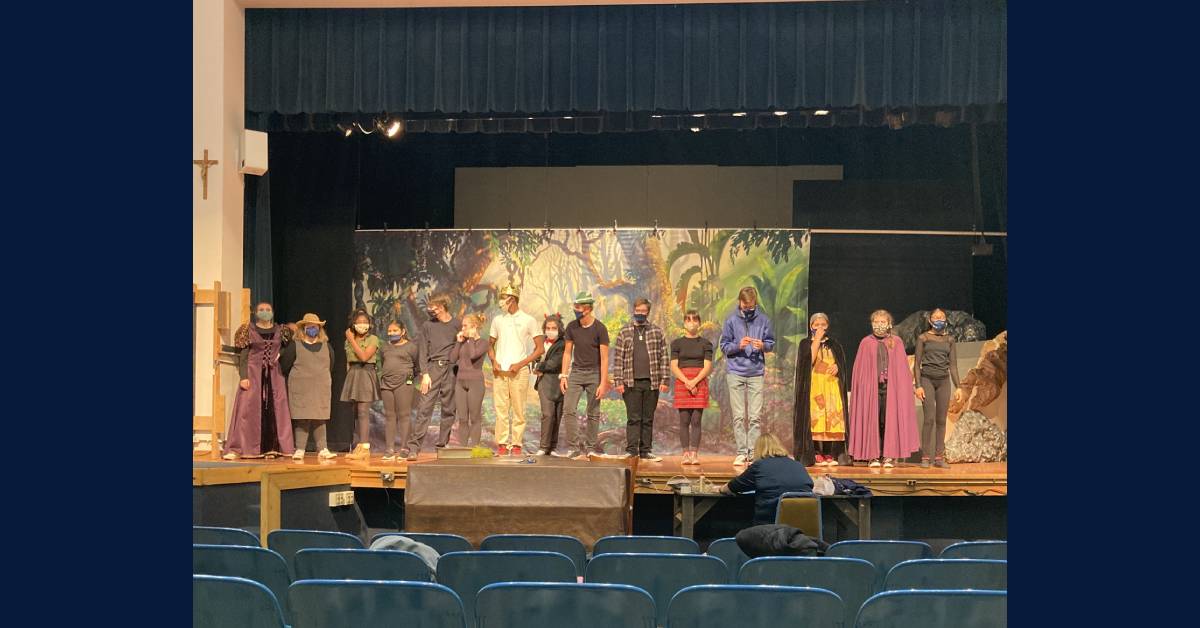 Amy Crane, the Marquette Catholic High School’s theater director, has been interested in theater since she booked her first role in “A Christmas Carol” during her first year of high school. 22 years have gone by since she started working at Marquette, and the whole time she has been involved with the theater department.

Last spring, the department was planning on presenting “Back to the 80’s,” but since the school closed due to COVID-19, the community never got the chance to see all of their hard work. When the school first announced its closing on opening night, Crane still had hope that they could present the show after students returned to school.

“The real blow came when it was announced we wouldn’t be returning for the rest of the school year,” Crane said.

On November 13, Marquette put on its most recent play, “The Brothers Grimm Spectaculathon.” It is a ‘comedic romp’ compiling all the Brothers Grimm fairy tales together in just under two hours. Although there were a few major changes in how the last play and all the plays going forward will be conducted, Crane is excited about the future of Marquette theater and hopes more students will join.

She believes theatre is a great creative outlet and has something for everyone from artists, to the technologically-inclined, to the business-minded, to performers.

The fall play was a great example of how the theater department will produce their shows during this time of pandemic. In order to keep the actors and audience safe, a few new measures were taken.

“The Brothers Grimm Spectaculathon” was video recorded instead of presented in front of a live audience. Masks were worn at all practices and behind the stage. Each actor had their own mask that they put on the moment they stepped away from a scene and, to make exposure time even shorter, Crane chose a play with shorter scenes for this fall. These precautions will be taken with every show from now on, until it is safe to do things the old way.

The spring show is going to be “Newsies,” which will be Marquette theater’s first ever official Disney show. Students are excited that they can present the show this year and hope to encourage other students to join, too. Theater really is for everyone because it is all about teamwork. All different types of people are needed for the show to come together, and, as Crane would say, “All are welcome!”

Anthony Holt has been part of the Marquette community for five years now helping out with theater and whatever else he can. This year, he has been welcomed to the staff as an Academic Advisor. His love of theater started when he was 17 in his senior year of high school, and from then on, he was hooked. Currently, at Marquette in the theater department, he is both the music coach and the sound technician.

Holt’s background in theater and the arts has helped prepare him to be an academic advisor. He helps students explore their creative side with theater as well as their academics.

“I wanted to take an interest in the students academic goals and help them any way I can,” Holt said.

Holt wants students to know that they are not alone, and the Marquette staff is there to help them through everything. His advice for incoming freshmen is to always look for ways to be helpful within the school and community. He believes everyone should participate in theater.

“It gives everyone a chance to show and display their creative side and forms a bond with other students for years to come,” Holt said.

Paolo Castillo is a sophomore at Marquette with a very promising future. His favorite thing about Marquette so far is the accepting environment and how friendly everyone is. At the moment, Castillo participates in Quiz Bowl, golf, and theater, but he has been thinking about joining a few others as well. When he is not at school or in extracurriculars, he makes music. Castillo has become well known within the school community due to his performances at the school’s talent shows.

When the spring play was canceled, he was disappointed.

“We all put so much work into it, and it was taken from us just like that,” Castillo said. “I especially felt bad for the seniors since they couldn’t have their final show the way they wanted.”

However, he did have a few roles in the fall play, “The Brothers Grimm Spectaculathon,” as The Devil, Dwarf 2, and Actor. He said that this production is one of the most fun plays he has ever done. Castillo has found a second home in theater, and said it is his outlet to release emotions and stress in a healthy way. He loves being given the chance to goof off and have fun with the numerous new friends he has made through theater. His advice for incoming freshmen is to put themselves out there.

“You can’t expect yourself to have an awesome four years at high school if you don’t try new things,” Castillo said. “Get out there and play a sport you haven't tried before, try acting, even try choir and things like that.”