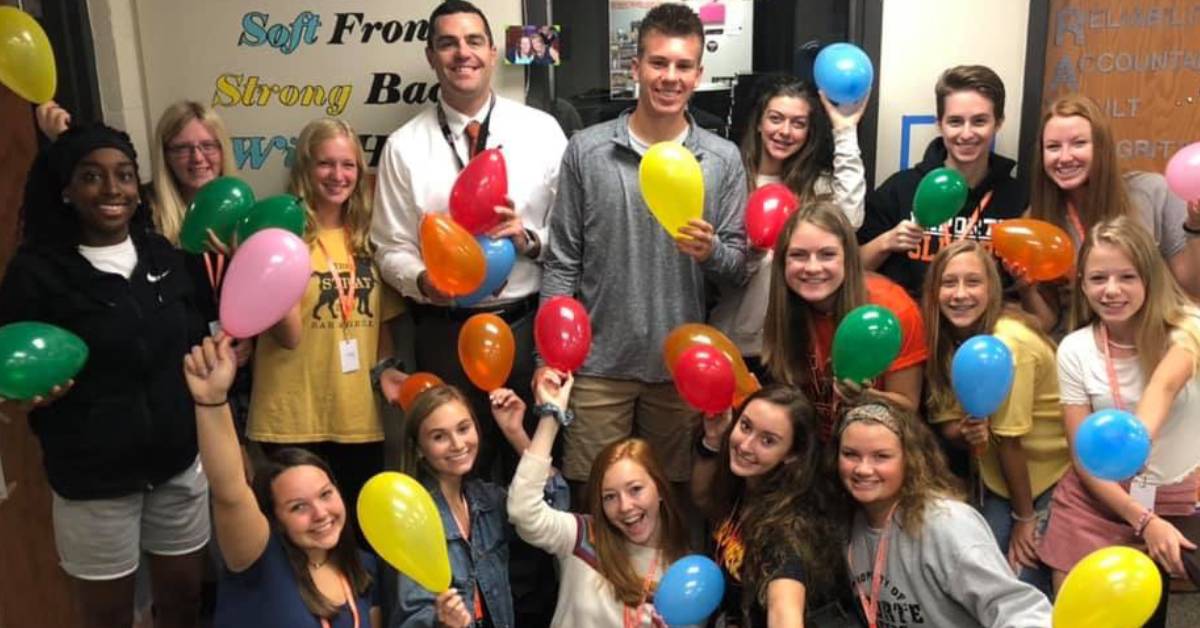 The annual La Porte High School Homecoming game ended with a loss to Michigan City, but the spirit week leading up to the game was a win for many Slicers.

The week consisted of a showing of unforgettable school spirit that kicked off with a country vs classy theme. On Tuesday, spirit week continued with students dressing up in surfer vs biker, Wednesday ’80s vs ’90s, Thursday skater vs frat, and lastly to ring in the game, Friday was orange vs black.

In addition to the Spirit Week bringing Slicers together, LPHS had the opportunity to decorate doors to win a prize at the end of the eventful week. Mrs. Joanna Witulski, American Sign Language teacher, won the award for the best door during the Slicer’s celebration, the Pep Rally.

The Pep Rally congratulated all candidates and encouraged the football players. After feeling the energy in the room, LPHS was reassured it had been another successful Homecoming week.

During halftime, the top three candidates were announced, and Homecoming King and Queen crowns were given to Diego Diaz-Lopez and Olivia Zarantonello.

Despite the cold and rainy weather, the football team played hard, and the crowd did not disappoint.

The La Porte High School Marching Band is slowly wrapping up their season and beginning to pack their bags for their quadrennial trip.

This year, the band is traveling south to Disney World to perform at the Magical Kingdom on Thanksgiving Day. They will be leaving on November 27 and returning December 2.

The band has taken several trips, but they haven’t traveled as far as Florida since 2003. They will be spending their five days performing at many different events.

They are looking forward to making their way to Disney, but their current concern is working hard for State Finals in Indianapolis on October 26th.

LPHS Principal Ben Tonagel has been pursuing his PhD in Education Administration since 2015, and every day he is one step closer to achieving his goal.

He takes classes online at Indiana State University, and it hasn’t always been easy sailing for the hard-working principal.

He received his Educational Specialist Degree in 2017 and is working to finish his coursework in the spring. After completing his classes, he will have to conduct a dissertation study. He admits that it has been a difficult process, but he is trying to take it one day at a time.

He decided to take this leap and return to school in order to strengthen himself as a principal and be the best version of himself regarding his education and leadership growth.

Tonagel admits that going back to school has been the hardest thing he’s ever done.

“I have a pretty demanding schedule as it is, so by far the hardest part has been working extra in the margins, early mornings and late nights, and not letting it negatively affect my family too much,” Tonagel said. “I have to manage my energy in order to have enough for the work that is required after a long day.”

Tonagel looks forward to the moments where it “all comes together” for Slicers. When growth, learning, and the ups and downs take place, it all works out in the end.

LPHS is unbelievably lucky to have Tonagel as their leader, and they are even more proud to watch him better himself by going back to school.

Every blank wall has the opportunity to be a canvas, and senior Olivia Jobbe has proven that.

Jobbe has expressed her love and talent of art throughout the hallways of LPHS and recently created a beautiful mural in Schultze Hall.

The idea of painting a mural in Schultze Hall occurred last year when Jobbe was assigned a project that counted as the final grade in her junior AP English class. The goal of the project was for students to spend 20% of their time in class working on a project that piqued their interest. That was the moment when painting a mural came to Jobbe.

“I looked around the school and scouted out a couple of smaller walls that I thought would be a challenge, but nothing too overwhelming. I wrote up a proposal outlining the process, timeline, concept, and why I should be allowed to take on the project. After making a rough sketch of my idea, I sat down with Mr. Tonagel with my portfolio, artistic resume, and proposal to discuss my request,” Jobbe said. “He seemed kind of unsure, but after Mrs. Lebo assured him I could do it, he decided that Schultze Hall would be the location.”

Jobbe wanted a challenging project, but the 34-foot long wall was more than she had anticipated. She had to measure the wall, make a scale drawing of the mural, project the sketch on the wall, trace it, hand mix all the colors, and then finally begin painting. The project ended up taking an entire year, but she is more than thrilled with the outcome of the mural.

Art has been in Jobbe’s heart for as long as she can remember. As a kid, she loved painting and drawing. She specifically recalls scribbling often. Even when kids were learning to color “in the lines,” Jobbe found it fun coloring outside of them.

“I even remember scribbling with crayons when I was in preschool, and when the other kids made fun of me for scribbling, I confidently stated that my scribbles were, in fact, abstract expressionism,” Jobbe said.

Jobbe strongly believes in being yourself and make your own path despite what society expects you to do, especially in her artwork. She hopes that other artists follow her lead because it has been incredibly beneficial to her.

“Creating artwork is about making a statement, not about making a pretty picture. Sure, visual appeal is important, but if you aren’t saying anything, it’s just an object,” Jobbe said. “If you’re anything like me, the statement that you are trying to make and the means by which you will achieve that are not always what everybody wants to see or hear. Don’t let that stop you. If what you are making is relevant to you, chances are, it will be for someone else. Even if it isn’t, it’s your voice, and it’s your right to use it.”

The world, not just a wall, is Jobbe’s canvas, and the Slicer family can’t wait to see what she creates.