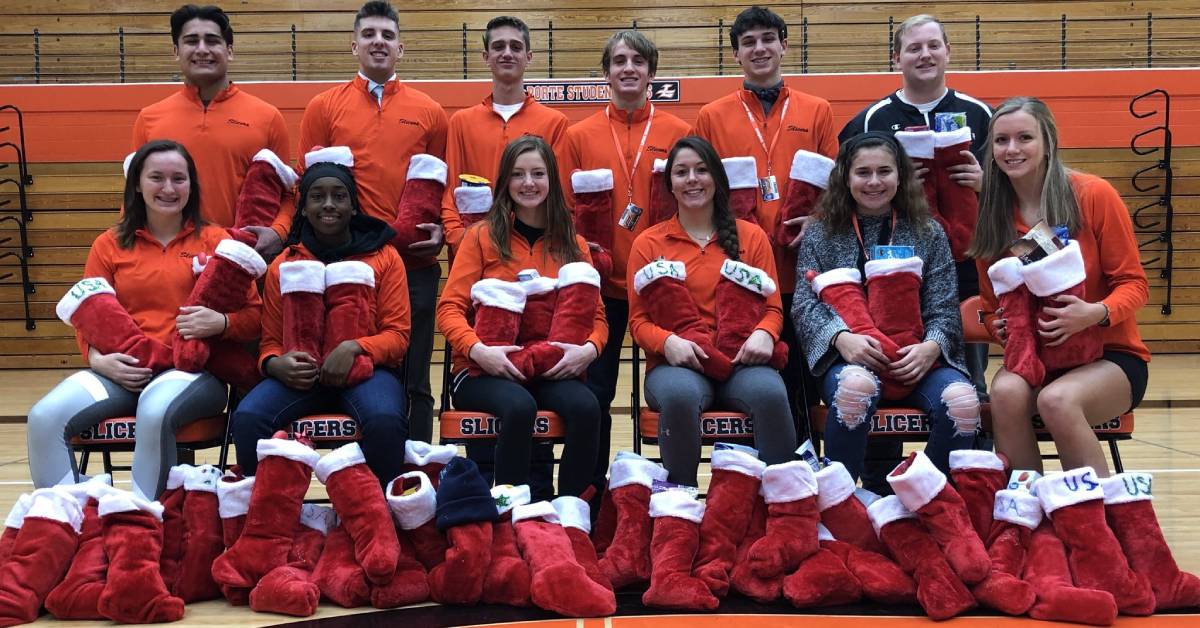 The goal of the stocking is to provide the people who have served and/or are serving the country now with food items that will help them through the winter, and bring cheer into their lives as well.

The students at La Porte have the opportunity to visit LP Cutler Funeral Home and Cremation Center to pick up a free Christmas stocking.

Not just LPHS students can get involved, but anyone in the community who is interested in making a difference can stop by and pick up a stocking during the funeral home’s open times.

LPHS teachers decided to spice up their lunch break with the second annual LPHS Chili Cook-Off during the e-Learning day on November 6th.

Ten of LPHS’ best teacher-chefs decided to partake in this much-anticipated event. The staff brought in the best versions of their homemade chili to share and enter in the competition.

There were four judges- Señora Krause, Mrs. Dawson, Mrs. Niksch, and Mr. Schwager- who tried every chili made, and cast their vote at the very end of the taste-testing. The judges voted on appearance, taste, flavor, texture, and aroma.

In third place, Ms. Gilliland shocked the judges with an exciting twist on her chili recipe. She went for a buffalo chicken take, which truly stunned the judges.

In second place, Mr. Thomas’ creative chili name: Carol’s Chili, won him the runner up position. His chili was very traditional, having the right amount of meat and chili beans with just enough seasoning.

The most delicious and creative chili of the day, however, was Mrs. Scott’s, who decided to take a Tex-Mex attempt at a classic chili. Her risk paid off, and she was crowned Chili Cook-Off Champion.

“I really loved participating in the chili cookoff because it gave me the opportunity to get to know more of my colleagues, since it is my first year teaching at LPHS, and this place is full of so many great educators,” Scott said.

Scott’s win took last year’s champion Mr. Doty by surprise. He ended up handing over the Chili Spoon Trophy to a new conqueror, and he was quite upset about it.

“I went out on a limb and tried an off the wall recipe that included cherry juice and pumpkin,” Doty said. “You can't win them all I suppose…”

The professional development day wasn’t all just work, and the teachers proved that not only can they excel in the classroom but also in the kitchen.

LPHS Senior Isaac King is finishing up his final year in high school in the most arts-centered way.

King has been a strong musician, actor, and writer ever since he stepped foot into LPHS.

His love for theatre all started when he was a junior in the LPHS play: Our Town and Wizard of Oz.

“I was almost replaced since I missed a lot of rehearsals, but I am glad I wasn’t. That ignited another passion of mine: theatre,” King said.

He has spent an overwhelming amount of time in plays since then. His most recent appearance is coming up on November 22nd and 23rd at 7:30 p.m. and November 24th at 2:00 p.m. in the show, Frankenstein. King will be playing the Creature, and in addition to that, all of his crazy curls will be getting chopped off for the costume.

King has been a stand out bass clarinetist every year since sixth grade, and he has proudly been a member of the LPHS Wind Ensemble, Pep Band, and LPHS Marching Band.

The band program is what gave King the love for performing, and he has made some of the greatest friends and memories playing in the bands.

“I wouldn’t be half the person I am without all those things I’ve done! I have a lot of trouble with seeing things through to the end, delivering a finished product if you will,” King said. “Marching band taught me how to do that, and also showed me how cool performing was. If my love for performing was a small fire, the plays were gasoline-soaked logs. I learned just how exhilarating it was to go up on stage and be ANYONE!”

King isn’t sure of what his future will bring him, but he plans on slowly purchasing many various instruments.

“I think that everyone should learn at least one, and shouldn’t only play it in school. Music is a wonderful thing that is too often seen as not wholly important, just some background noise for when you’re doing dishes or whatever,” King said. “If you’ve played a good jazz lick or heard one and have it strike you, as it has to me and millions of others, your mind would be changed.”

Despite his uncertainty for pursuing music, King knows for a fact that he will continue with English in some way. He doesn’t know if he will teach English, write, or just continue his love for reading.

“If I dig into a good book, I mean really get invested in it, I could spend entire days or afternoons trying to see how it ends,” King said.

In addition to reading, King uses his creativity to create thrilling stories.

“I love writing fantasy stories since they’re the easiest to see the contrast between ordinary life and life in the story. Magic showcases the difference perfectly,” King said. “You have to think about how life would be different if magic were a factor, how it would be used day to day and then on a higher level, too.”

Even though King doesn’t know what his future holds, LPHS staff and students know he will continue to read, write, and perform like no one is watching—yet. But because of his talent, we all are watching.

Math teacher, Ms. Mount is spending her 34th year at LPHS, and she’s happy to be here.

Mount started her college education at Ball State University. She went into college clueless, not knowing what her major would be. After spending an immense amount of time tutoring students in math, she finally said to herself, “Why don’t I teach math?”

Since then, she excelled throughout college. She played volleyball, basketball, and softball, and when she finished college, she even started coaching.

She started her teaching career down south, but when a position in La Porte opened up, she jumped on it.

She built the softball program at LPHS from the ground up when she began teaching there.

Not only did she benefit the athletic department, but the mathematics department appreciated her presence even more.

She eventually realized that her time of coaching was coming to an end, so she made the transition to only teaching Algebra 2 and Precalculus.

“My favorite moments are when the kids finally get something that they have been struggling with for a long time,” Mount said.

Mount knows that math doesn’t come easy to everyone, but she makes sure every student has an equal opportunity to succeed