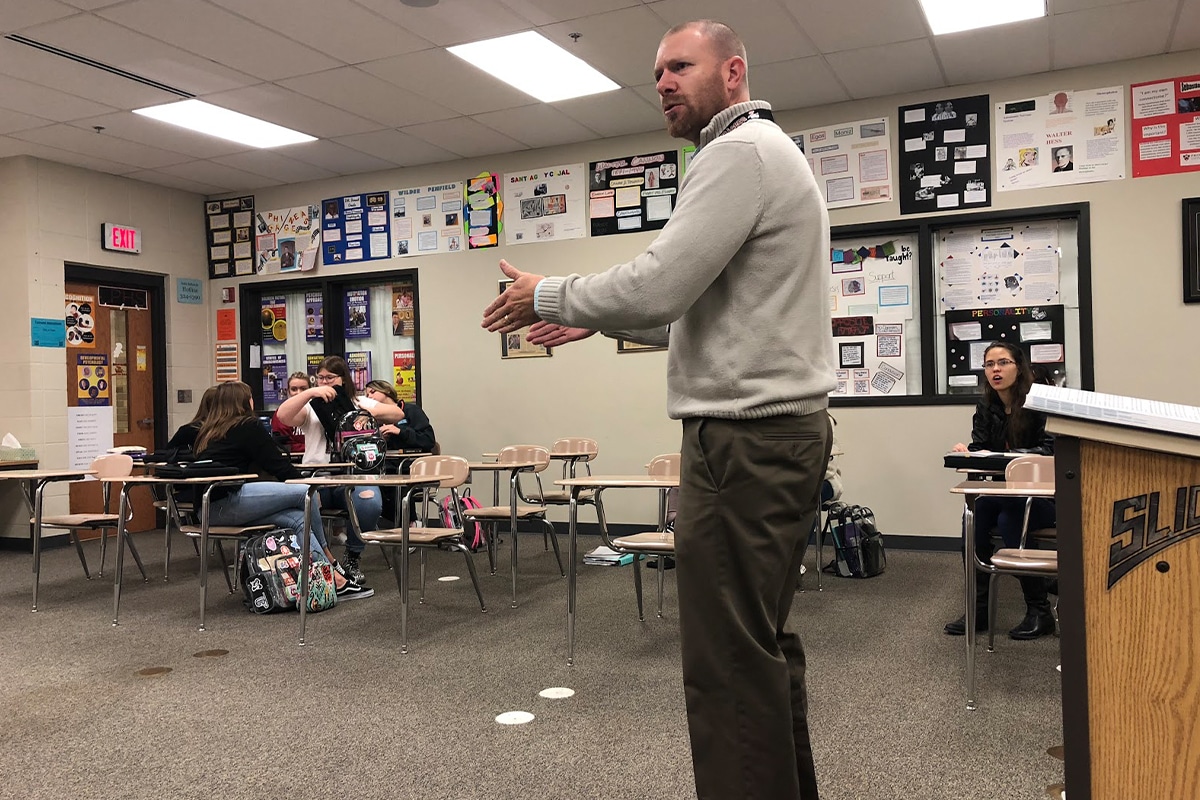 Daniel Jeffers, La Porte High School teacher, has become a friendly face throughout the hallways. Through his time teaching several subjects, on top of coaching Cross Country and basketball, it is rare to find a LPHS student who has not heard of Mr. Jeffers.

“No matter what we’re doing, his class is always fun to be in. His goofy personality makes it easier to be engaged in his lessons,” Grace Miller, senior, said.

Jeffers has taught U.S. History, World History, World Geography, Current Events, Government, and Psychology classes throughout the past 18 years. After developing a love for Social Studies in middle school, and having a few inspiring teachers along the way, Jeffers knew he wanted to teach.

“It just seemed natural to want to teach and share my passion with others in the way my teachers did with me,” Jeffers said.

Jeffers’ favorite thing about education is the research that goes into it. His classes do many activities that require students to seek answers for themselves. Group discussions are also a common occurrence in his classroom. He looks forward to introducing students to new ideas through a variety of ways.

“My favorite thing about teaching is seeing students develop a passion and understanding of a concept or subject that may spark anything from a career interest to a decision to getting involved in a cause or program they discovered while in my class,” Jeffers said.

Outside of school, Jeffers enjoys spending time with his family, traveling, watching and coaching sports, and learning new things. Whether it be through class, sports, or just through a smile in the hallway, Jeffers has become a favorite at LPHS.

Not many high school students are able to put an everlasting list of accomplishments on their resume; Jill Maudlin, though, has the ability to do just that.Maudlin, a high school sophomore, has been described as “driven” and “hardworking” by teachers at LPHS. Maudlin is a part of Art Club, Stand Club, Spanish Club, Spell Bowl, Principal’s Advisory Club, Key Club, Academic Decathlon, Academic Super Bowl, and the Guiding All Kids Committee. She has also played softball since she was eight years old. Along with the many groups she is a part of, she has been very successful in each of them.

“I’ve only missed 4 words in the 7 years I’ve been in spell bowl,” Maudlin said.

While she has many people she looks up to as well as encouragement from those push her to do her best, two of her greatest role models are her dad and her grandpa. With the support she has from her family, friends, and teachers, she hopes to take her success further than just high school; she looks forward to going to Notre Dame with hopes to become a brain surgeon.

“Jill is one of those students who sees the big picture but then can zoom in and see all of the little details. I’m constantly amazed by her intellectual capacity, artistic abilities, and her humor,” Mrs. McGuire, LPHS English teacher, said.

With a strong mindset and high goals set for herself, Maudlin is sure to find victory in herself no matter where she may go.

The La Porte High School Marching Band and Color Guard had a surprising, yet incredible, end to its season; they had the opportunity to travel to Mt. Vernon High School in Fortville, Indiana to compete in the Scholastic Class A State Finals. They brought home a second place finish.

This year’s state finals was planned to be held in Indianapolis at Lawrence Central High School on October 20th, but was rescheduled for October 27th due to weather conditions.

The extra traveling may have been stressful for some, but the extra practice time was helpful. Time was spent perfecting their routine and making small tweaks to ensure it was at the level they wanted.According to Mr. Sullivan, La Porte Marching Band co-director, the extra week made a huge difference in making the routine cleaner and the lines straighter.

After performing their routine, the band knew they had put on their best show yet. As the results were announced, the band, as well as the Slicer fans, were surprisingly shocked to hear they had finished in second place.

Overall, the Slicers had a successful and memorable season, and they concluded it with a better-than-expected experience.

As Thanksgiving nears and people finish taking down their spooky Halloween decorations, those in the La Porte community are looking forward to the season of traditions. While some may consider Black Friday shopping or decorating for the holidays as their traditions, many around La Porte have a different tradition in mind: the Thanksgiving Day Turkey Trot.

This year the sixth annual Turkey Trot will take place on Michigan Avenue in La Porte at 8:00 a.m., though registration will begin at approximately 7:15. The race should last a few hours.Both a 5K run and a 5K walk will take place. The cost of the race is $20, and proceeds go directly to The La Porte Educational Development Foundation.This year’s Turkey Trot is projected to have the greatest turnout. The race is open to all ages, and all participants will receive a shirt.

For more information, to ask any questions, or to sign up for this year’s Turkey Trot, visit https://runsignup.com/Race/IN/LaPorte/LaPorteTurkeyTrot.